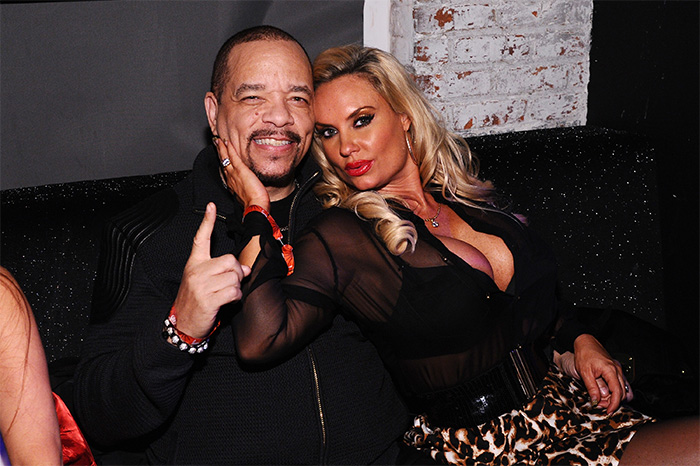 In addition to discussing his life on the streets and entertainment career during his Stern Show debut on Wednesday, Ice-T opened up to Howard about his relationship with model and reality starlet Coco Austin.

The two have been married for about 15 years, but Ice-T still vividly remembers the day they met. “I was on a movie set and I was grumpy that day,” he told Howard. “And my boys saw her — she was on the set working — and they said, ‘Well, this will cheer Ice up. Let’s put her over near him just so he’ll have something to do.’ And I’ve been, you know, something to do for [17 or 18] years.”

He said he generally doesn’t like to be introduced to women because he “likes to do his own fishing,” but for Coco his friends made an exception. Apparently they knew what they were doing, too, because when he turned around to see her for the first time all he could say was “Wow!”

“I’m like, holy shit, ‘What the fuck just happened?'” he told Howard, adding, “I was just kind of stunned.”

But he didn’t give up. He told Howard he marched back over to her and admitted he was “thrown off guard” by her beauty, telling her she was “drop-dead gorgeous.” He recalled asking her, “Have you ever considered dating a gangsta rapper?”

She wanted to know if he was a “nice” gangsta rapper, which is when he dropped the line he believes may have helped seal the deal: “Well, baby, you take the ‘n’ off ‘nice’ and you get ‘Ice.'”

After that, they were inseparable, but it took watching an episode of “The Osbournes” for Ice-T to realize he needed Coco to be his partner on every level. He told Howard he had admired Ozzy Osbourne as an artist for years, but wondered where he might be without the help of Sharon.

“I was studying Sharon Osbourne at the time,” he told Howard, saying he wondered, “Would Ozzy have a house if it wasn’t for Sharon?” Ice-T realized then that he needed Coco to complement his artistry.

Another key to their long-lasting relationship is “jungle sex,” according to Ice-T—a term he first heard used by a happy elderly couple on TV.

Howard wanted to know what that meant.

“Just taking it a little bit further, just having a little fun with the buildup,” Ice-T explained.