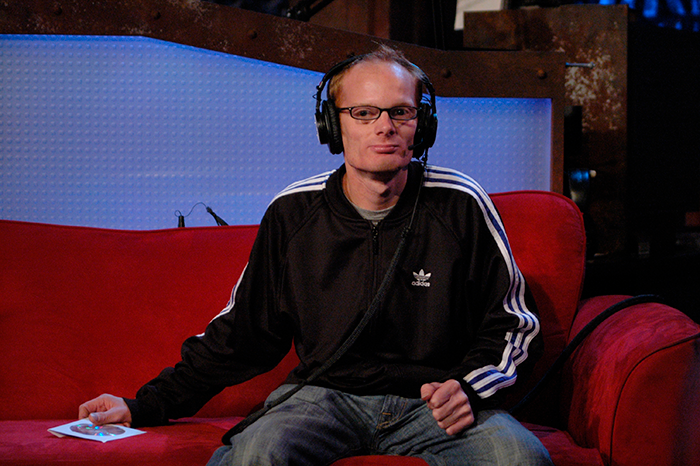 Medicated Pete during his intern days in in the studio Photo: The Howard Stern Show

Howard reminded listeners that the 42-year-old with Tourette’s syndrome has been associated with the show since 2009 when he was invited to work at the office for a semester under the tutelage of Scott “the Engineer” Salem.

“Pete’s biggest job when he worked with Scott was he was supposed to come in after the show and turn down the headphone volumes and clean the headphones,” Stern Show Executive Producer Gary Dell’Abate recalled. “But he couldn’t seem to pull that off.”

Pete also took a liking to Jon Hein and would frequently sit directly next to him (at the behest of fellow Stern Show staffers Jason Kaplan and Will Murray).

“He would hold a piece of paper and he couldn’t keep still, so it would be constant tapping on the paper nonstop as I was trying to work,” Jon remembered.

Howard wondered why Pete was unable to complete his task of cleaning the headphones and Pete explained it “must’ve been the O.C.D. thing or something,” which at times caused Scott to become “a little testy.”

Despite his O.C.D. and tics, Pete told Howard that he refrains from using too much medication as the side effects can oftentimes become worse than his actual symptoms … like when he began having hallucinations.

“I had a tripping episode,” Pete told Howard. “I would see trees like running after me and stuff … so fuck that,” he added.

Pete said that this went on for an entire year whenever he would leave the house causing him to both talk to the trees and to run away. “It wasn’t pleasant,” he said. Luckily the experience has not caused him any lasting fears of forests or the outdoors.

Adopt Holly, the Adorable 10-Year-Old Dog Looking for a Home