“I did bring different hats with me,” the Stern Show staffer says in defense of his onscreen headwear choice 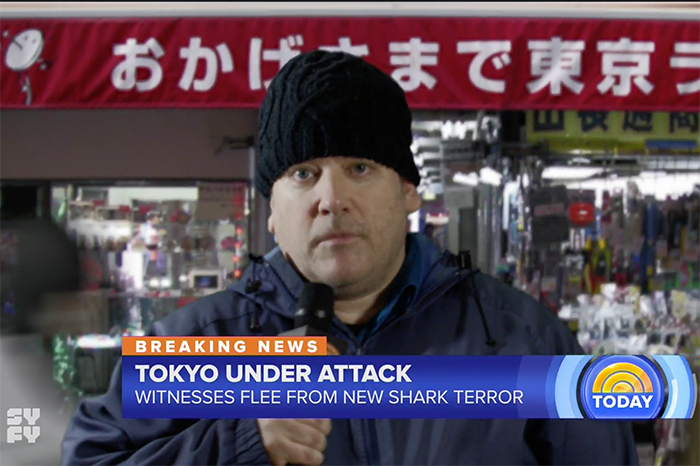 Benjy Bronk returned to TV screens across the nation on Aug. 6 with his cameo as a news reporter in “Sharknado 5: Global Swarming.”

The Stern Show staffer has appeared in each installment of SyFy’s infamous shark-themed franchise since the second movie.

This time around Benjy was cast as Howard Beale, reporting from Tokyo at the scene of a “Sharkzilla” attack, which he screams is “another sign of the apocalypse.”

Howard and Robin both wondered why he seemed to yell his lines for the film.

“This is the end of the world,” he countered. “Did you see what was happening?”

Benjy also drew questions with his choice of headwear: a ski cap. “I did bring different hats with me and they just said, ‘Wear that one,’” he explained.

Benjy did reveal that he wore a hat in the first place to cover his balding head, which he’s considered hiding with a toupee in the past.

@bobohstern here’s @bronk appearance on Sharknado 5. How about a retweet for a superfan? pic.twitter.com/QGlajk8xML

Catch Benjy in “Sharknado 5: Global Swarming” on the SyFy channel.