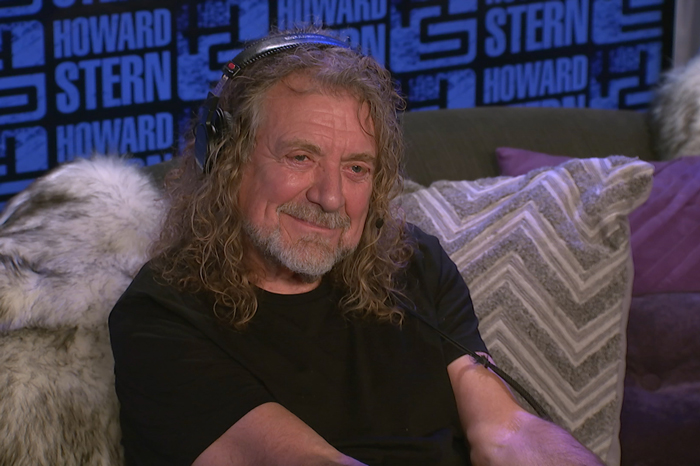 Howard welcomed one of the greatest voices in rock and roll into the Stern Show studio for the first time on Tuesday morning — the one and only Robert Plant. As the lead singer of Led Zeppelin, Plant and his band sold hundreds of millions of records and influenced not just their own generation but countless fans who’ve listened to their music throughout the years.

Check out the highlights from Howard and Robert’s wide-ranging interview (below), including what it was like to meet his idol Elvis Presley, the prank Led Zeppelin once pulled on The Who, and what fans can expect from his new album “Carry Fire,” available now. 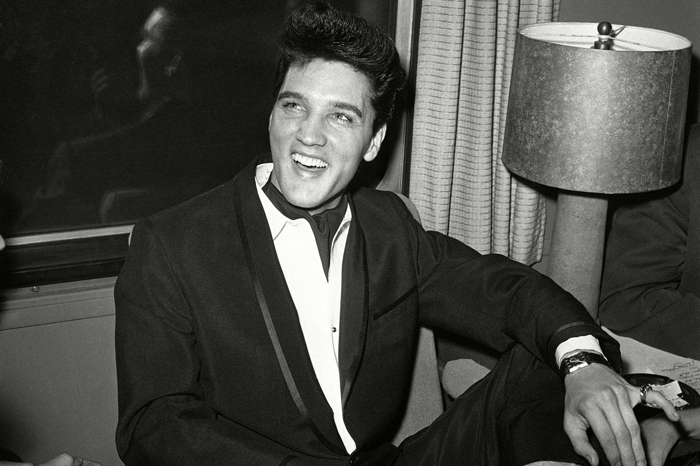 Music was an interest of Plant’s from a very early age and he recalled for Howard how he would pretend to be rock superstar Elvis Presley as a kid growing up in England.

“I didn’t know what he danced like, to be honest. I just knew the voice … it just was celestial,” Robert said, explaining he had no access to video of Elvis’s moves — he could only hear his music on the radio.

Fast forward a few years to Led Zeppelin hitting it big and actually catching the King’s attention. “He knew that we were selling tickets faster than him and he wanted to know what kind of phenomenon this was,” Robert told Howard.

The band was invited to meet with Elvis at his Los Angeles hotel room — Presley was staying in the royal suite on the top floor. Robert can still recall how the room slowly but surely filled with female fans who all seemed to resemble the actress Sandra Dee.

“When the room was suitably full … when the room was buzzing with anticipation, the door opened and this guy just, I don’t know what the word is. It’s not sashay, it’s not slink … he just grooved his way through the people,” Robert said.

Despite worshipping Elvis in his youth, Robert told Howard he wasn’t nervous on the night he met him. Rather, he remembers them standing around his hotel room for hours, talking about music.

As for whether Robert and Led Zeppelin ever hosted their own sumptuous fan meet-and-greets, Plant told Howard they were more likely to just avoid people altogether. 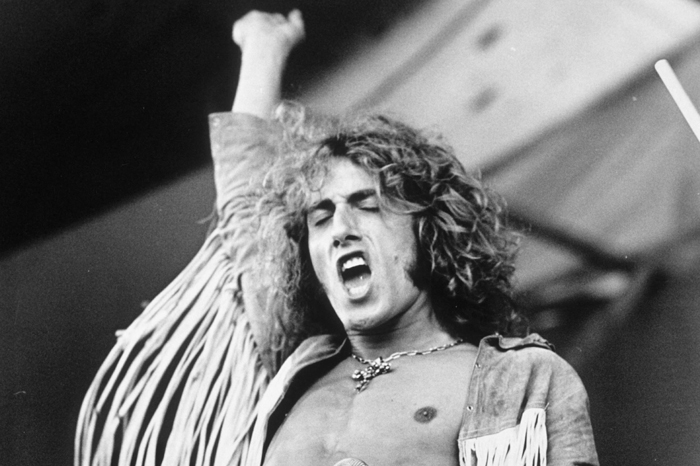 Some of the most celebrated albums in rock history were released in 1969, including the Beatles’ “Abbey Road,” the Rolling Stones’ “Let It Bleed,” the Who’s “Tommy,” and the massively successful “Led Zeppelin II.” After Howard brought up “Tommy,” Robert recalled a prank he and his bandmates once pulled on the Who way back when.

“I looked a little bit like Roger Daltrey but a bit taller,” Robert said of the Who’s lead singer with a laugh. “Sorry, Roger.”

After seeing the Who live at a New York concert, Robert admitted he and Led Zeppelin left before the encore and wound up at the famed restaurant Max’s Kansas City. Turns out that’s where the Who was scheduled to eat after their show.

“We walked in the door and they said, ‘Wow, you’re early,’” Robert continued. “And we said, ‘Yeah, yeah it was an early show.’ So we went in and ate all the band’s food and ran away.”

Howard wondered if Zeppelin ever felt competitive with the Who or any of the other big rock acts of the day, but Robert explained they were all just “kids” who hadn’t any time to think about matters like that.

In 1975, Robert and his then wife Maureen were involved in a serious car wreck while visiting Greece. “I was in a wheelchair for seven months,” Robert told Howard, adding that his injuries put Zeppelin’s plans for a seventh studio album on hold.

Though the accident could have killed him, it gave Robert a new perspective on how precious his life is. “Why waste a second of time after that?” he said on Tuesday.

Living life to the fullest meant avoiding doing drugs for Robert. “Drugs, I have no interest in … It got in the way of joy,” he told Howard.

However, Zeppelin’s drummer John Bonham, often regarded as the greatest drummer who ever lived, struggled with substance abuse and addiction throughout the band’s history. In 1980, Bonham died in his sleep after a full day of heavy drinking. Rather than replace him, Zeppelin ultimately decided to break up

“He was my brother,” Plant said of Bonham. “He was a loose cannon but he was a spectacular guy.”

During the 2012 Kennedy Center Honors, the band Heart performed “Stairway to Heaven” live in tribute to Led Zeppelin, whose three surviving members were being honored. Joining them on stage behind the drum kit was John’s son Jason Bonham. The performance (above) brought tears to Robert’s eyes as he watched from his seat in the audience.

“What it was was his boy was playing drums,” he told Howard. “I thought, all those years later, you know, that it was just one ridiculous loss.”

Phil Collins in the Hot Seat 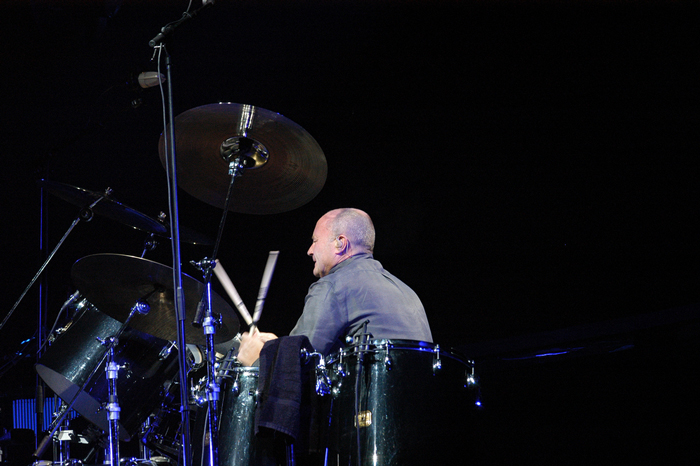 With Led Zeppelin deciding to disband, Robert set out on a solo career beginning with 1982’s “Pictures at Eleven.” His second solo studio album “The Principle of Moments” came just a year later and Robert told Howard he was approached by Phil Collins with an offer to play drums on the record.

“He loved John Bonham so much, he said, ‘You need someone in the hot seat and I want to do it,’” Robert recalled.

He credits Phil with helping him “dig out of the pit” following the death of his friend. Collins played drums on six of the album’s eight tracks including the hit song “In the Mood.” 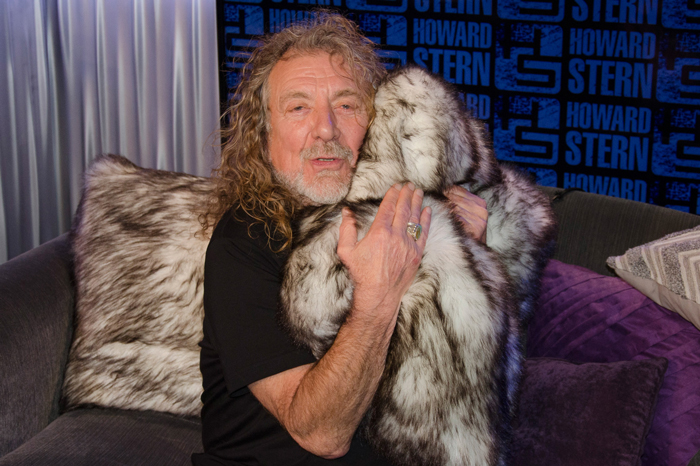 October marked the release of Robert’s 11th solo studio album “Carry Fire.” To be making music more than 50 years after Led Zeppelin’s first record is no surprise for Plant — the thrill of being a rock star is far from gone.

“I love everything that I do now. Otherwise, you know, I’d be growing vegetables somewhere,” Robert said. “This is no struggle, mate. This is all I want to do.”

Howard thanked Robert for coming in and told him how much it meant to sit with him as a lifelong Led Zeppelin fan.

“I’ve got another record coming out in three years. I’ll be back,” Robert replied.