Comedian also tells Howard about her new Hulu series “I Love You, America” 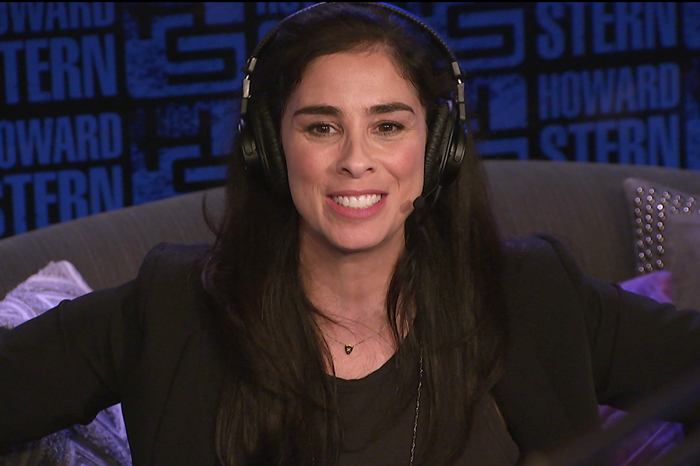 There were several things worth celebrating during Sarah Silverman’s return to the Stern Show on Monday morning – mainly that she was even still alive to visit Howard. In July 2016, the comedian went to her doctor with a sore throat but was soon diagnosed with something far more serious.

“The second he looked down my throat he rushed me to the emergency room,” Sarah told Howard. She was diagnosed with epiglottitis, a potentially fatal condition that involves a growth in one’s windpipe which blocks the flow of air to the lungs. Emergency surgery was necessary to remove the growth but the procedure itself was so dangerous, Sarah only had a 50-50 shot of surviving.

“It was either about to grow a millimeter and choke me to death or explode and kill me,” Sarah explained.

Her surgery was successful, but afterwards Sarah had to be intubated, meaning she had a tube inserted inside her trachea to help her breathe. She told Howard when she woke up, her instinct was to pull the tube out but she couldn’t since her hands had been restrained.

“I just assumed I had been captured by ISIS,” Sarah joked.

By her side throughout the entire ordeal was Sarah’s boyfriend of several years, actor Michael Sheen. “He would shoot all day and then sleep in a chair next to me at night. I had no idea he was even there,” she said.

Sarah and Michael are still together and still in love even though the two live in entirely different corners of the world – her in Los Angeles and him in the United Kingdom. Howard wondered how the two make their long-distance relationship work so well.

“We’re adults … I love him and he loves me and we live in fucking different countries,” Sarah said. “When I get to see him it’s such a great treat and we look forward to it … This works for us.”

The last time Sarah saw Michael in person was during a visit at the end of August. They’ll be back together again next week while Michael has a break from shooting his TV show. It helps that Sarah’s been busy herself, working on her new Hulu series “I Love You, America.”

“I’m a loner. I’m so busy with this show and … it’s all I want to think about or work on,” she told Howard.

Though it’s been dubbed a political series, Sarah said “I Love You, America” is only political in that it happens during our current times and to avoid all politics would simply be impossible. Rather, her goal is to meet as many different people throughout the country and connect with them through conversation.

“I had a family dinner with this family that all voted for Trump and they had never met a Jew,” Sarah said. “They actually Googled ‘Jew.’”

All of her comedy material is now going into her TV show, which means she currently has no polished jokes for a stand-up act. But she took Howard through the process of coming up with one funny observation she made about squirrels and how they unsuccessfully hide their acorns, a bit she included in her latest special “A Speck of Dust.”

“This paranoid, cokehead animal that thinks that everybody wants their fucking acorns, they hide them everywhere and then they’re so fucked up on coke they can only find like two out of every ten,” Sarah said with a laugh. That squirrels can only find 20 percent of all the acorns they hide is something Sarah read on a science facts site she follows on Twitter. She then realized those buried acorns eventually grow into trees.

“It just made me laugh so hard. Like, honestly, I never got sick of talking about it in my stand-up because it makes me laugh every time,” Sarah said.

Sarah is still a devout Stern Show listener and heard Ronnie last week confessing to wanting to be a woman for a day in order to feel what it’s like to have sex with a man. “I can kind of relate to Ronnie,” Sarah admitted. “I think I would be interested in experiencing, for a short, finite amount of time, having a cock.”

She might not have one but she’s certainly smelled one. Howard announced tomorrow marks the 10 year anniversary of when Sarah smelled Richard Christy’s unwashed manhood. Even after a decade, she can still recall the odor.

“It was a very specific smell,” she remembered on Monday. “It smelled like sour milk and crayons.”

Relive Sarah smelling Richard in the audio (below).

See Sarah Silverman in “I Love You, America” premiering Oct. 12 on Hulu.