“It’s like Pictionary except with cocks,” Howard explains of the Cocktober-themed game 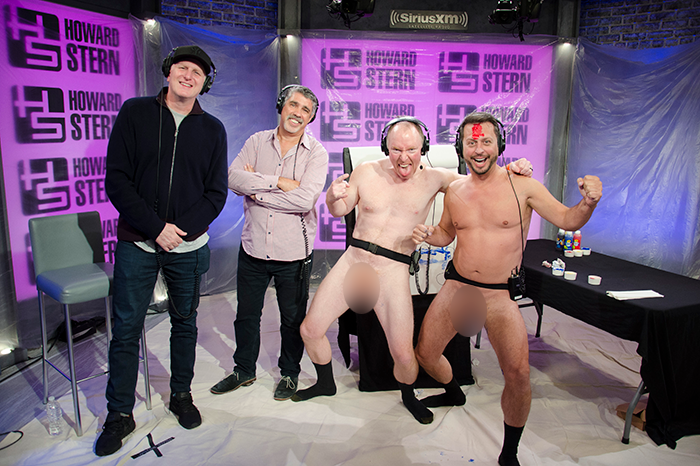 Michael Rapaport may have been apprehensive about diving into Cocktionary—a Cocktober-themed game featuring Richard Christy and Sal Governale—on Tuesday, but Howard was quick to calm his nerves.

“You’re the first celebrity to play Cocktionary,” the King of All Media told him excitedly, explaining the game was basically “Pictionary except with cocks.”

Both Richard and Sal were to dip their penises in paint and attempt to draw whatever item a randomly-chosen card denoted. Whoever got Rapaport to guess what their picture was the quickest would win.

“I can’t believe I have to see these guys’ loafs,” Michael bemoaned.

Sal’s nude presentation seemed to bother him most, though. “Sal, you are a disgusting animal,” he told the Stern Show staffer. 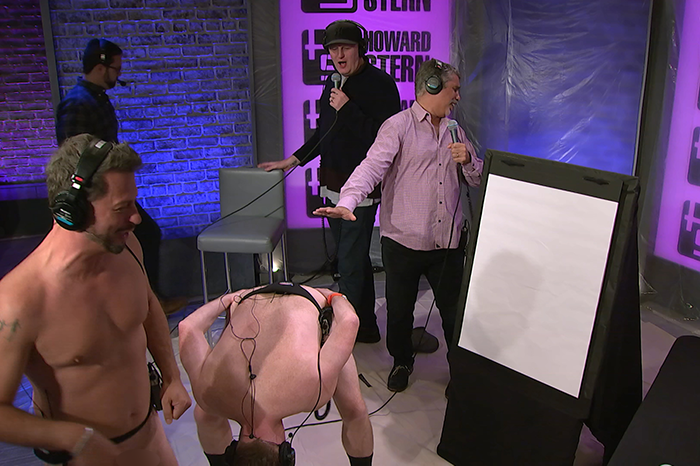 And with that, Sal placed a quarter in his “pouch” and tossed it around as Richard called “heads,” winning the right to go first.

“My brush is ready,” he declared as he chose a blue paint and picked his card.

Richard did his best to draw a picture with his dong, but Michael couldn’t quite make out the shape. “You can’t be an abstract dick painter!” he exclaimed. 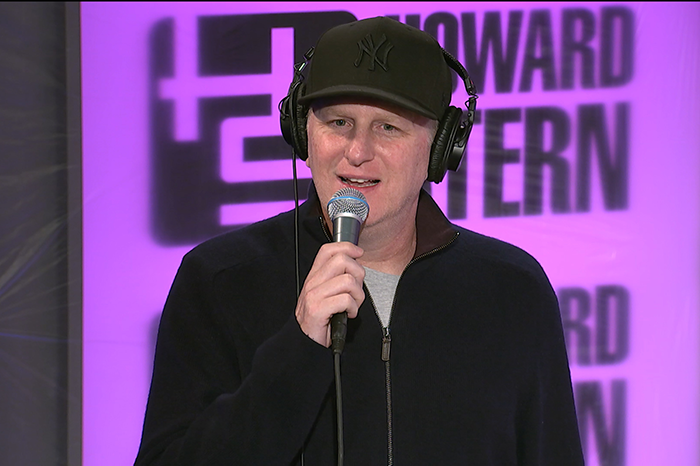 Nevertheless, the painting began to take form and Michael fired off guesses. “It’s a face of some sort. I thought at first he was doing a flower, like a … it’s not the sun … it’s the sun!”

With Michael correctly identifying the sun, Richard clocked in at 40 seconds flat.

Reflecting on the experience, Richard noted “it was fun” but conceded he should’ve used yellow paint.

As Sal walked up to the easel, Michael again took in his nude physique. “He’s got a weird brush,” Rapaport noted.

The uncircumcised staffer followed Richard’s lead with the blue paint and quickly got to work. Howard, Robin, and Michael were confused by the early sketch, though. 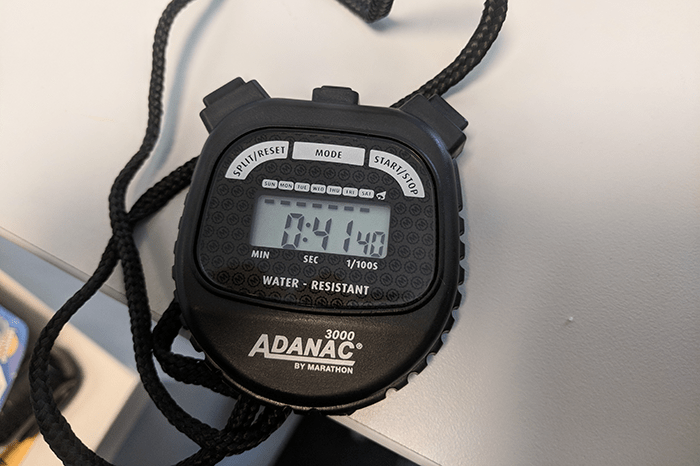 The final answer was correct, but unfortunately for Sal the early confusion led to a slower time and he clocked in at 41 seconds—only one second longer than Richard.

As a reward for winning, Richard was allowed to paint an “R” with his penis on Sal’s forehead. Yet, things didn’t go exactly as expected. 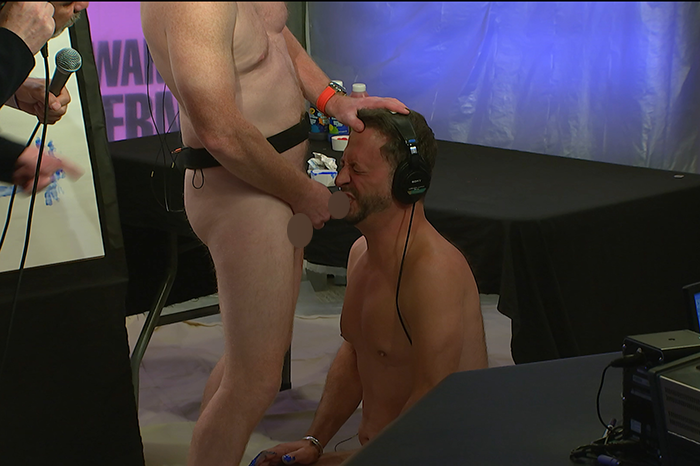 Sal closed his eyes for the punishment and left his mouth slightly agape, which led to Richard dropping his manhood on his coworker’s lip in “a goof.” 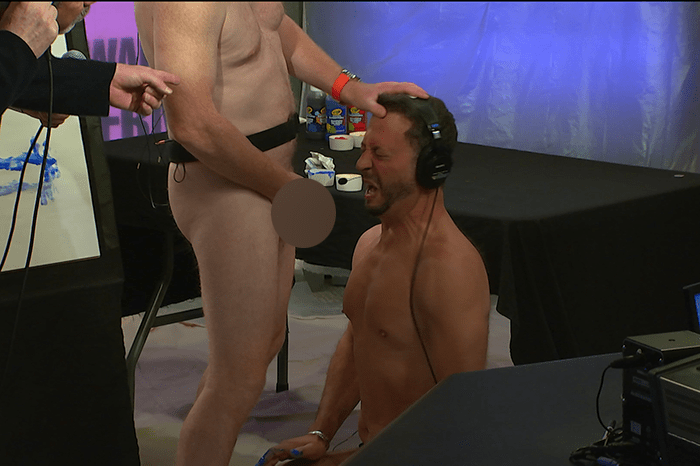 “He sucked him off! I saw it!” Rapaport exclaimed as Sal gagged in horror. 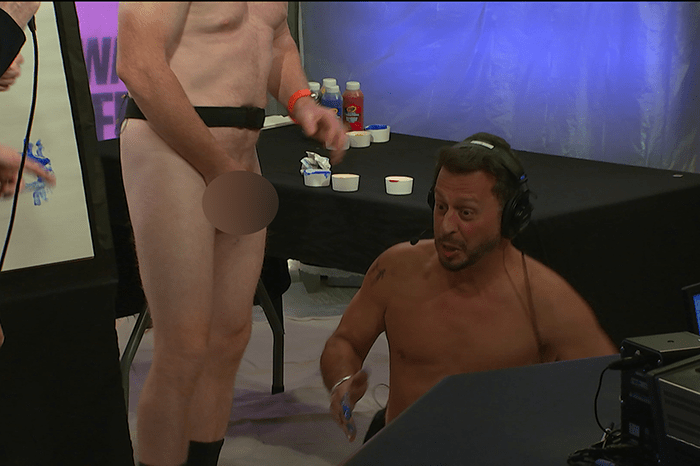 Despite the extra punishment Sal was still forced to receive the “R” on his forehead. “It’s like Ash Wednesday,” Richard joked.

Take a look at the final product (below). 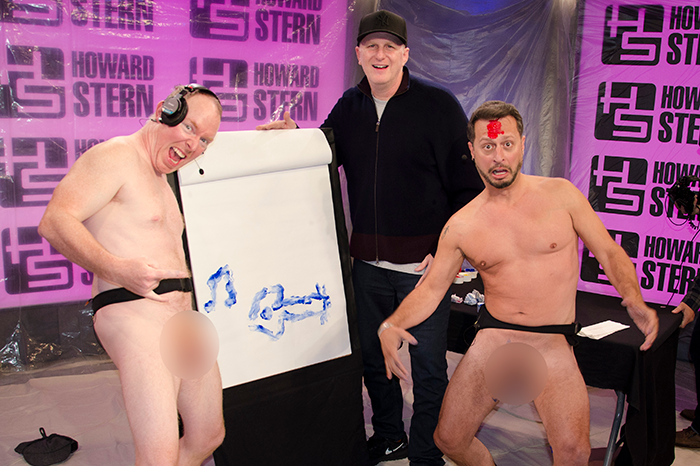 Grab a copy of Michael Rapaport’s “This Book Has Balls,” out now.