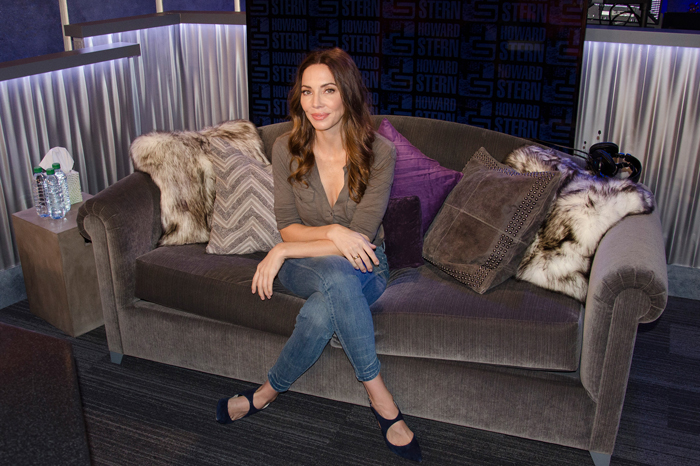 One of the most iconic American TV families is set to return to the tube in 2018 when “Roseanne” gets rebooted on ABC. Comedian Whitney Cummings is an executive producer on the series and she shared some behind-the-scenes details on Tuesday when she visited the Stern Show.

Alongside her in the writers’ room are fellow stand-up comedians Wanda Sykes and Norm Macdonald, the latter of which has been nothing short of “brilliant,” according to Whitney.

“He’s been awesome … he’s so logical,” Whitney said of Norm, explaining how he will point out certain specifics within a storyline that simply wouldn’t happen in real life.

Keeping the new “Roseanne” as realistic as the original is important to Whitney and the rest of the team. She told Howard she grew up watching the sitcom and still remembers how daring and edgy many of the episodes were, tackling subjects like race, class, and domestic abuse. She also admitted to getting a bit emotional just thinking about creating stories for all of the original cast.

“I cry at least twice a week at the idea of writing dialogue for Dan Conner,” Whitney said of John Goodman’s character, for which he won an Emmy in 1993. Fans will no doubt remember Dan dying during the original series, so Howard wondered how the Conner patriarch will be brought back to life in the reboot.

“You’ll see,” was all Whitney could offer.

As for the show’s star, Whitney said Roseanne Barr is one of the reasons she got into comedy and said she’s just as funny now as she was when the series first aired.

“We had Roseanne in one of the auditions, like for actors … we were crying laughing,” Whitney told Howard. “She’s one of the greatest.”

Whitney recalled her own stand-up debut that started off with a bang before becoming a series of on-stage flops. “The first time I ever went up I killed and then I bombed for three years after,” she told Howard. “I just told a story about a bad date.”

While she got laughs telling the story on her first night, each time she told it thereafter it felt less and less authentic to the audience. Whitney described it as “a shitty impression of my shitty [first] set.”

Through patience and practice, though, Whitney earned a reputation as one of the best in the biz, especially when it comes to killing on celebrity roasts. “I think being a good roast joke writer is a mental illness,” she said of her own skill. “You have to be emotionally numb when you do it.”

Cutting someone down to size isn’t easy, either. Robin brought up how Whitney even apologized to her beforehand at the roast of Joan Rivers since the jokes she’d written about the Stern Show co-host were so hard-hitting.

Howard noticed there seemed to be fewer and fewer roasts happening these days. “It’s hard to find people that will do them,” Whitney told him. “No one wants to get made fun of anymore.”

Whitney also supposes the political correctness within our current culture could be to blame for why there aren’t as many celebrity roasts. “That is why the roasts, I think, should be monthly because we’ve all gotten so infantilized and we’ve become little babies and everything offends us now,” she added.

Her comedy may offend some but it was something else Whitney did that was deemed so offensive, it actually got her kicked out of her gym.

“I got asked to leave a gym in Los Angeles. Three gay guys complained because I was doing sit-ups in front of the mirror with no underwear on,” she told Howard with a laugh. “I like to ventilate.”

To provide the most air flow to her nether regions, Whitney said she works out wearing only loose-fitting shorts. But after giving those around her a sneak peek, she was told by management she had to wear “undergarments” if she wanted to exercise there.

That story is just one of the many candid tales Whitney tells in her new memoir “I’m Fine…And Other Lies,” available now. This is Whitney’s first book and she’s now gearing up for a 14-city book tour where she’ll perform some of her stand-up act before signing copies for fans. Howard still has fond memories of his own book tour, even though he’d spend several hours meeting and greeting the tens of thousands that came out to see him.

Whitney is willing to do just about anything a fan asks of her, but she draws the line at taking career advice. “I have people that are like, ‘You know what you should do? You should do Marvel movies,’” Whitney recalled with a laugh. “And I’m like, ‘Oh I didn’t think of that! Thank you!’”