No one stays the same. It’s not only a lyric in Miley Cyrus’s new song “Younger Now,” it’s true of how she feels about her own life. On Wednesday’s Stern Show, Miley told Howard that even though she’s a different person then she was during her days as a Disney star on the TV series “Hannah Montana,” she doesn’t run away from her past.

“I love that I was fucking Hannah Montana,” Miley said while sitting live in studio. “That’s what the song ‘Younger Now’ on my album is about. It says, ‘Even though it’s not who I am, I’m not afraid of who I used to be.’”

Fame came fast and furious for Miley after she landed the role of Miley Stewart, the seemingly normal teen who secretly moonlights as pop sensation Hannah Montana. But she told Howard the part was initially given to a different girl.

“They cast someone, besides me, first. And they even did a pilot without me and then they said it didn’t work,” Miley said.

Producers eventually realized Miley was perfect for the part, casting her alongside her real-life father Billy Ray Cyrus. After shooting nearly 100 episodes of “Hannah Montana” and acquiring a loyal legion of preteen fans, Miley was ready to break off and put out her own music. Howard told her the first time he remembers her showing up on his radar was with her 2009 song “The Climb.” 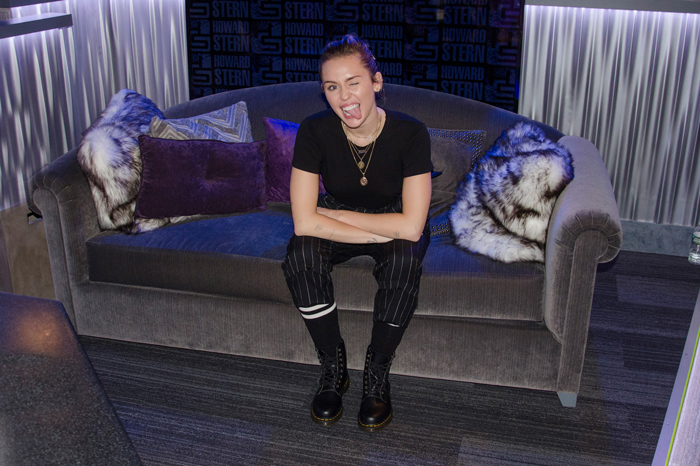 Later that same year, Miley released yet another hit with “Party in the U.S.A.” She performed the song live on Wednesday but considering the current stories in the news, Miley thought it best to put a different spin on the otherwise upbeat track. Take a listen (below).

The same way Miley stands by her stint as Hannah Montana, she also told Howard she has no regrets about her 2013 song “Wrecking Ball” and its accompanying music video. “Some things live forever,” Miley said. “Swinging around naked in the middle of a bunch of rubble licking a sledge hammer—that’s forever. That shit’s not going anywhere. It’ll be here long after me.”

2013 also marked Miley’s much-talked-about appearance at the MTV Video Music Awards that included a risqué duet with Robin Thicke. “The reason why that’s the best thing that’s ever happened to me in my life is that’s when I realized my power,” she told Howard. “What if that could be a thing that isn’t self-serving to me?”

Her ability to capture the audience’s attention was undeniable. So when Miley returned to the VMAs the next year, she brought as her date a homeless youth in an effort to shine a light on something that needed the nation’s attention. She also started her non-profit organization the Happy Hippie Foundation which, according to its website, rallies young people to fight injustice facing homeless youth, LGBTQ youth and other vulnerable populations.

Included on Miley’s new album is “Week Without You,” a song she says was inspired by watching Elvis Presley’s movie “Blue Hawaii” pretty much on repeat while growing up. The reason: the female lead’s name “Maile” sounded just like her own.

She has a vision for the music video, too – she plays an Elvis-like character locked up in jail under the watch of a police officer played by Bill Murray. The two have already worked together with Miley serenading the comedian on his Netflix holiday special “A Very Murray Christmas.”

Just this week, Miley got a chance to perform with two other living legends – Billy Joel and Paul Simon. The three sang together on stage at Joel’s Madison Square Garden concert. Howard asked if Billy paid her any compliments after the show.

“He said, ‘Cyrus got pipes’ and that made me feel really good,” Miley said.

“As much as fame is a part of this … I don’t really care,” she continued. “I care that Billy Joel fucking said that I did a great job. That’s what I live for. Those are the accomplishments.”