“I happen to be a rare talent,” Robin says of her own singing abilities 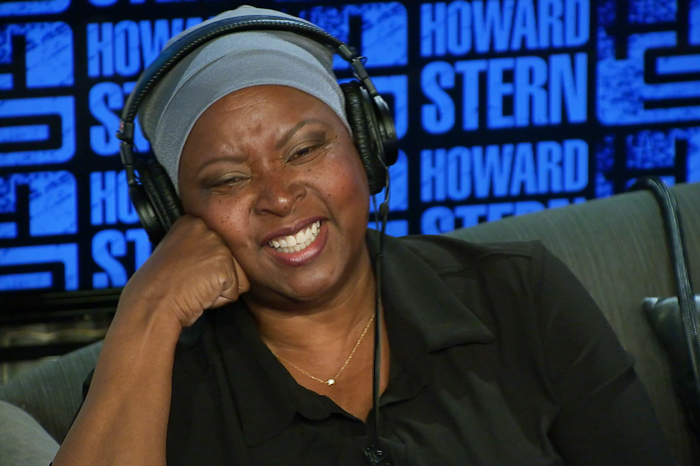 A wall of glass has separated Howard Stern and Robin Quivers for nearly four decades, but on Thursday’s special live Stern Show the two longtime radio partners sat face to face for a momentous on-air interview. While she is primarily known as a trusted newswoman, Robin has recently made a name for herself as a recording artist, covering classic songs from nearly every genre. Howard asked her seriously where her love of music originates from and she took him back all the way to her days as a young girl growing up in Baltimore.

Her mother Lula Louise Quivers kept albums in the house by some of the great female singers of the day: Ella Fitzgerald, Rosemary Clooney, Dinah Washington. Robin loved to listen to them on the family’s turntable and then sing the tunes later while she was completing her chores. Her mother, however, didn’t like the sound of Robin’s singing voice and used to tell her daughter to “shut up that noise.”

“But I enjoyed it. Sometimes I didn’t even know I was doing it,” Robin said. And no matter what her mother said to her, she was going to sing. “I’ve always done whatever I wanted to do.”

Something she could not do as a child was get any formal training to nurture her love of music. Her parents forbade her from taking piano, violin, and tap dance lessons.

“Their attitude was, you’re gonna be a maid … why waste your time learning an instrument?” Robin told Howard.

Once on the Stern Show, Robin was face to face with a microphone on a daily basis but it took her several years before she was willing to sing on the air. Howard dug up the audio of the first time his cohost sang on the show, dating all the way back to Dec. 4, 1990 when Robin performed Joni Mitchell’s “Help Me” during a commercial for a former Stern Show sponsor. Hear the historic moment in the clip (below).

Robin continued to sing on the Stern Show for many, many years including her famous rendition of Sheryl Crow’s “If It Makes You Happy” accompanied by the band Staind. But she eventually called it quits after feeling her singing voice wasn’t good enough to be heard on the radio. It wasn’t until 2011 that Robin had a change of heart after getting caught serenading herself with Eric Clapton’s hit “Cocaine.”

“I was in the studio, all mics were off, I was listening to Fred play that song,” Robin recalled. “And joyously I started to sing and I was having so much fun singing.”

Howard played the accidental recording on air and Robin was able to laugh at herself in that moment. “I didn’t like it but it was funny and people loved it,” she explained. “If my singing can do that for people, I should do it more often.”

Now, there isn’t much music that Robin won’t sing, but Howard wondered if she has any aspirations to record her own songs. While she often creates original music, Robin explained she does not write them down or capture the tunes she comes up with in any way. She recalled making up her own song with her friends all the way back in sixth grade.

“I probably would have been a better songwriter, if I had tried writing songs,” Robin told Howard.

As a grown woman, Robin has been able to take the music lessons her parents never allowed her to but the sessions have always been short lived. She stopped taking voice lessons after her instructor told Robin simply “there’s nothing I can teach you.” Her piano classes proved too difficult to continue, as well.

“I can’t make my left hand do something that my right hand isn’t doing,” Robin said.

Someone who has been able to work with Robin is her music producer Derek whom Howard invited into the Stern Show studio to talk about the process involved with recording Ms. Quivers.

“She’s very theatrical,” Derek said. “Like, she’ll grip the air and kind of do like these big long hand gestures.”

Derek played a major part in Robin’s latest music offering – her “Divas Project” album which debuted on Thursday’s Stern Show. No matter her audience’s take on the performances, Robin is certain Derek has done all he can to make her sound her best.

“Believe me, this is the best singing career I can have,” Robin said with a laugh.