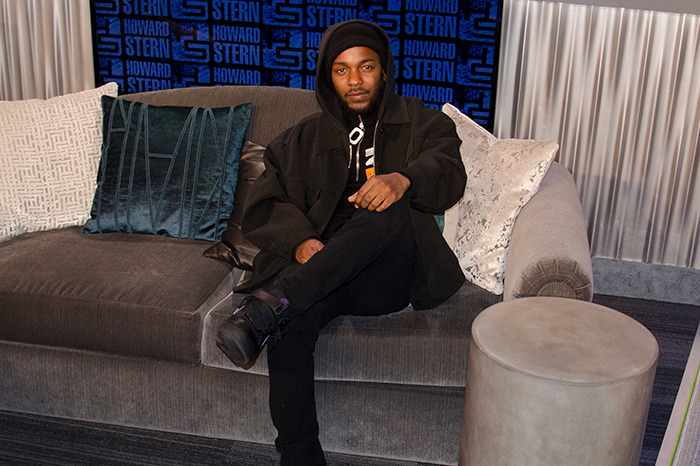 Fresh out of an all-night recording session in New York City, seven-time Grammy winner Kendrick Lamar dropped by the Stern Show for the first time to talk to Howard about his new album “DAMN.,” how he went from a Compton kid to a rap icon, and the Prince collaboration that almost materialized.

With some calling him the greatest rapper alive, Kendrick also addressed the pressures of the business and what fuels his success.

Check out all of the highlights from Kendrick Lamar’s interview with Howard (below).

Growing Up in Compton

While Kendrick is one of the biggest names in music today, he didn’t have an easy path to success. Growing up in Compton, Calif., amidst gang wars, he was exposed to violence and death at a young age.

Despite the environment, Kendrick credits his parents with helping him keep things in perspective early on. “My mother—she helped me with that,” he told Howard, explaining that she constantly reminded him he didn’t have to live the gang lifestyle.

Kendrick also considers himself lucky to have grown up with a father in his life. “He gave me the reality of it,” he said. “But as a man what he taught me … you have to go through things. You have to see for yourself. He could tell me everything in the world, you know, but I’m still going to go out there and, you know, get my hands dirty.”

In Compton, it wasn’t a sure thing that Kendrick’s father would even make it out alive. In fact, in an odd turn of fate detailed in the song “DUCKWORTH.,” Kendrick tells the story of how his future label owner Anthony “Top Dawg” Tiffith could have taken his dad’s life when Kendrick was a young boy.

Kenny Duckworth, Kendrick’s father, worked at a KFC when Top Dawg was active in a gang and instead of risking a run-in Kenny decided to give him free food to gain favor. “True story,” Kendrick told Howard, adding that it makes for a fun moment when the two see each other nowadays. “Every time they come around each other, my pops and Top Dawg, it’s mind-blowing because they have to bring it up.”

Top Dawg would go on to become an even more influential force in Kendrick’s life with his Top Dawg Entertainment label under which he gave the budding rapper an opportunity to spend time in the studio honing his craft instead of getting into trouble out on the streets. “It’s a safe haven,” Kendrick said of the studio. “That was my college.”

Nowadays, Kendrick told Howard he’s committed to giving back to his community where the struggle still exists for a new generation of kids. “It’s really not just a financial thing,” he explained. “Setting small goals and higher standards for yourself. That is the thing that I always preach to my family.”

Getting a Call From Dr. Dre

After years of churning out mixtapes and demos, it was a cheaply-made YouTube video which caught the eye of legendary hip-hop producer Dr. Dre. But when the call actually came, Kendrick told Howard he thought it was a joke and hung up.

“We was eating at Chili’s, I’ll never forget it … We got a call, like, ‘Yo, Dr. Dre likes your music.’ And we were like, ‘Who the fuck is this?’” he recalled with a laugh. After hanging up and receiving multiple additional calls from people telling Kendrick that Dre was trying to get in touch, the reality set in.

When he got into the studio with hip-hop’s first billionaire, it wasn’t just a conversation either. “The first time was the moment I knew I’ve arrived because I’m not only meeting him, it’s just not an introduction. He plays a beat and says, ‘Write to it,’” Kendrick remembered.

If writing a verse and recording it on the spot weren’t challenging enough, Dr. Dre was watching him the entire time.

“Are you checking his mood … looking at him while you’re working on it?” Howard asked.

“Got to … I call it check the temperature,” Kendrick explained. And what he saw was reassuring as Dre began nodding his head to the verse. “But also at the same time he’s not trying to give me too much attention because he maybe don’t know how that can deflect or reflect on the music,” he added.

Evidently Dre liked what he heard and that first track they recorded together became the song “Compton” on “Good Kid, M.A.A.D City.”

As a result of his rise to fame, Kendrick is constantly compared to rap greats like Jay-Z and Tupac, but Howard wondered if he believes himself to be the greatest rapper alive.

“I have to. Because that’s the only way it’s going to move the culture forward,” Kendrick said.

In fact, with tracks like “The Heart Part 4” and Big Sean’s “Control,” Kendrick has even taken to calling out new and old rappers alike, declaring himself to be the “greatest rapper alive.”

The proclamation has ruffled a few feathers with his peers, but Kendrick says the competition is what pushes him.

A Near Collaboration With Prince

Being at the top of his game has allowed Kendrick to work with some of the biggest names in music, but there’s one collaboration that never made it to tape—a track with Prince.

While working on “To Pimp a Butterfly,” Kendrick flew out to Prince’s Paisley Park estate with hopes of recording some material for the track “Complexion (A Zulu Love).”

“It’s a surreal moment because this is one of the people I idolized,” Kendrick told Howard. “It’s one of them things where it was so much going on in the moment,” he said, though.

Despite plans to record, Prince also had a concert planned at the estate that day and invited Kendrick to watch as they went back and forth from the studio listening to the record. The next thing Kendrick knew, he was onstage performing with Prince. “I didn’t even know I was coming out onstage,” he said. “I’m up there freestyling and it just turned into something else. I totally forgot about the song after that.”

Listen to the full story (below).

One artist Kendrick did get the chance to collaborate with is pop star Taylor Swift after she videotaped herself rapping along to his “Backseat Freestyle.”

The two ended up connecting on her track “Bad Blood,” but Kendrick told Howard it wasn’t a decision he made lightly. First, he had to make a judgement call. “I’m a hip-hop artist. How far in the pop world is the sound?” Kendrick explained of his deliberation.

After determining it was a project he wanted to be a part of, Kendrick remembers he simply joined Swift at an L.A. studio and laid down the track in a couple of takes. “With this particular record, it was just me just vibing and catching her lyrics. I didn’t want to get into her head too crazy,” he recalled.

And while he didn’t know if it would be the massive hit it ultimately became, he told Howard it was a specific drum sound on the track that drew him in—one he hadn’t heard in the hip-hop culture before. “So, I knew it would cross worlds, but it would do it the right way,” he said.

Howard did have an important question for someone like Taylor rapping along to Kendrick’s lyrics, though: Should she rap the N-word?

“She should mumble it to herself. That’s the edit. She got to make her personal edit,” Lamar said with a laugh.

While he doesn’t have much time for extracurricular activities, Kendrick did tell Howard that he has been getting interested in astrology lately. And his interest may have to do with an experience he had as a 6-year-old.

“I probably shouldn’t even be talking about it,” he told Howard, explaining that as a child he saw an alien spaceship and it left a lasting impression on him. “I’m going to stand my ground to this … Nobody believed me then and don’t [nobody] believe me now,” he asserted.

Robin wondered if he got abducted and Kendrick replied with a laugh that he “probably did.”

Before heading back to the studio to record new music, Kendrick also got a chance to hear the Stern Show’s own Robin Quivers on the mic with her cover of Cardi B’s “Bodak Yellow.”

“The voice is there, the timing is a little off,” he told Howard’s cohost. “We just got to get your pitch and your timing right.”

Grab a copy of Kendrick Lamar’s album “DAMN.” and tune in to the 60th annual Grammy Awards on Jan. 28 where Kendrick is nominated in seven categories.