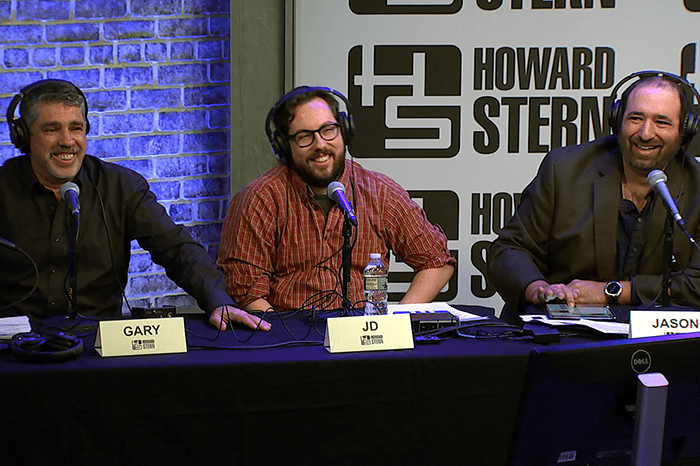 “What a show we have today!” Howard exclaimed at the top of Wednesday’s live Stern Show holiday party special.

Before getting to the in-studio festivities at hand, though, Howard noted that, in the wake of Benjy Bronk’s recent noise level recommendation, he had heard a few more complaints about the upcoming off-air holiday party attended by Stern Show staffers.

Jason Kaplan jumped in first, explaining his complaints weren’t about the actual party so much as the behavior of certain attendees. For instance, he said that upon arriving at the party, Jon Hein, JD Harmeyer, and Ronnie Mund immediately commandeer a table as a clique and become unapproachable.

JD argued he simply doesn’t like to walk around socializing and prefers to have anyone who’d like to talk to him approach the table. This isn’t new behavior, either. Jason told Howard he pulled the same move during Richard Christy’s baby shower. “He has that awesome move … he just sits there and people come to him. He doesn’t, like, travel around the party,” he explained back in September.

Speaking of Richard, the new father revealed his wife would be staying home with their newborn instead of attending the party, but she requested he bring her back some treats from the evening.

Hopefully she wasn’t holding out for leftover shrimp, though, as Gary Dell’Abate is rumored to control the corner where the seafood is served. In fact, a few new staffers reportedly mentioned they were eager to see him in action.

Furthermore, while not a complaint, Jason did offer up an observation about the two different Ronnie Munds who tend to show up to the party.

“When Ronnie first gets there, it’s Ronald. He’s quiet … but he also seems like he’s angry to be there,” Jason said. “Then there’s a tipping point where all of a sudden Ronnie’s up screaming, dancing.”

“I’m sorry, Jason, that I have a good time and you don’t,” Ronnie shot back.

And finally, multiple sources wondered if notorious latecomers Benjy Bronk or Ralph Cirella would make it on time this year.

When questioned on whether he was going to be late, Benjy wasn’t totally sure. “I don’t think so,” he offered.