Plus, JD Harmeyer gets showered with compliments from his soon-to-be wife 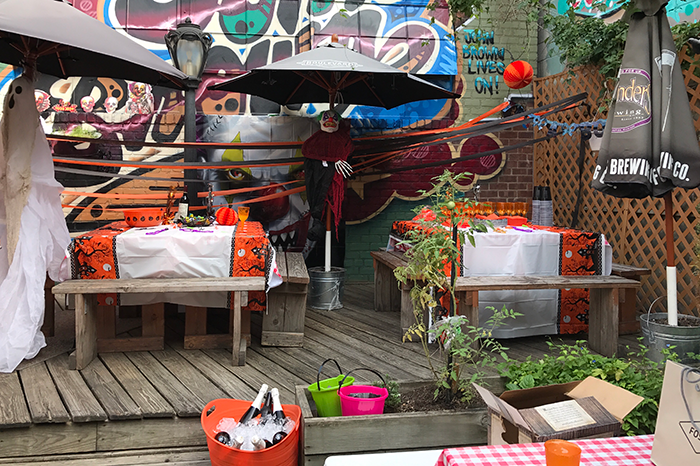 Richard Christy hosted a baby shower over the weekend in honor of his wife and their son, Carson Cain Christy, who is due to be born in the fall. Staying true to his reputation, Richard held the party at a Kansas City-aligned bar and BBQ restaurant in New York and even adorned the space with Halloween decorations to celebrate the fact that the baby is due to be born around his favorite holiday.

“It was definitely a party for Richard because I don’t even know if his wife buys into this Halloween stuff the way he does,” Jason Kaplan, who was in attendance, noted.

Stern Show staffers Will Murray, JD Harmeyer, Gary Dell’Abate, Sal Governale, Benjy Bronk, and Ronnie Mund also showed up for the festivities. In fact, Sal even brought along his friend Larry Caputo, who he has reportedly become inseparable from.

Benjy—who got mixed reviews on his behavior—noted the Halloween theme didn’t stop at simple decorations, either, as Richard opted to use eerie sound effects instead of music. “It spooked me a little bit,” he told Howard.

According to the staff, Richard also provided specialty beer and champagne for his guests, while Gary brought his own flask of Scotch and Ronnie went out to buy a full bottle of tequila.

After learning about the tequila, Howard said it made more sense why his limo driver seemed to have a hoarse voice on Monday morning.

“He kept yelling at me to bring him beer,” Richard said with a laugh.

Ronnie pushed the comments aside, though. “I was having fun,” he said.

According to multiple sources, Ronnie, who was flying solo that day, had quite a bit of fun between his drinking and what he described as engaging in a “really weird conversation about cock” with a Christy family friend.

Another staffer who had a nice time at the baby shower was JD Harmeyer.

“He has that awesome move … he just sits there and people come to him. He doesn’t, like, travel around the party,” Jason said.

Moreover, Will, who was seated at the same table as JD, told Howard “it’s very funny to see him and the girl be very lovey-dovey.” JD’s fiancée told him how handsome he is and rubbed his back a lot, according to his coworkers.

“That’s got to be the best entertainment,” Howard responded with a laugh.