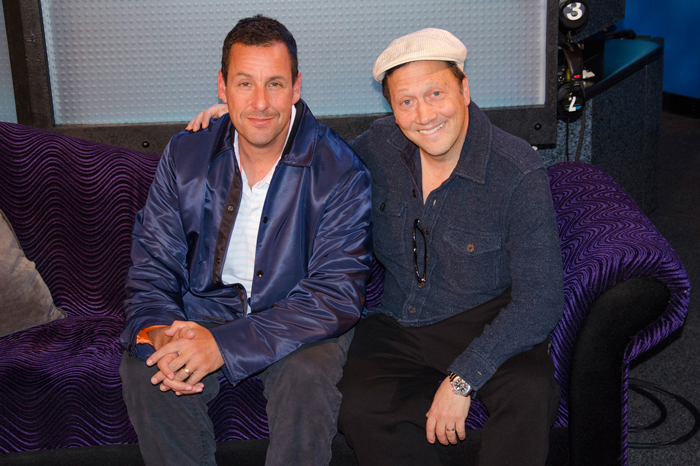 Adam Sandler brought his longtime buddy Rob Schneider with him to the Stern Show on Wednesday morning and Howard asked the two “Saturday Night Live” alums about coming up together on the renowned late-night show. While it was Rob that became famous first for his copy machine character on “SNL,” Adam hit it big after singing his original songs live on air. Sandler even got a call from director Steven Spielberg saying he was a fan.

“Somebody gave him my number and he left a nice message,” Adam told Howard. The positive feedback came while Spielberg was in the middle of shooting “Schindler’s List.” The director told Adam his “Red-Hooded Sweatshirt” song helped him laugh on an otherwise depressing movie set.

Sandler and Schneider became fan favorites on “SNL,” but they told Howard there were a few guest hosts who outshined even the regular cast of the show. Alec Baldwin, who’s now hosted “Saturday Night Live” a record 16 times, was one such host.

“He was always a bad ass out there,” Sandler said of Baldwin’s performances. Adam is also a fan of Alec’s current cameo appearances on “SNL” where he regularly impersonates President Donald Trump. “The guy is ridiculous. He is so fearless out there,” Adam said.

Trained actors like Alec tend to do well as hosts, according to Sandler and Schneider, especially sitcom stars. Rob remembered telling Christina Applegate, then on the hit show “Married… with Children,” that she was so good she should consider joining the “SNL” cast. Christina explained to him that move didn’t make a whole lot of financial sense.

“You guys, like, make a nickel … I make 100 grand a week,” Rob recalled Christina telling him.

Future sitcom star Jennifer Aniston supposedly turned down a job on “SNL” in order to star in the pilot for “Friends,” a move Adam said they all thought was a mistake back then.

“I think there was talk about her being in the cast and she went to ‘Friends’ and we were all like, ‘Well, I don’t know about that,'” he said with a laugh.

“Friends” worked out pretty well for Jen, and eventually Adam and Rob became household names themselves. Early on at “SNL,” however, they’d seek out their fans while eating lunch at Planet Hollywood.

“You’d go there because you knew young people were going to show up there and there was a chance to be recognized,” Adam told Howard. He remembers one afternoon when Rob got mobbed by fans at the Manhattan restaurant. “The place went bananas and they were all attacking Schneider and I was sitting there eating, watching this, going, ‘This guy’s fucking big now. Holy shit,'” Sandler said.

Rob told a similar story of watching Adam get recognized on the street the day after his first appearance on “The Late Show with David Letterman.”

“I will say this, though, he did wear the same outfit the next day,” Rob joked about the efforts Adam went through to get recognized.

Howard asked if they ever had a great idea on “SNL” not make it to air. Rob revealed he once wrote a sketch called “James Bond HIV” that involved the famous film spy talking about the many things his high-tech pen could do. “But I would have given […] anything if it would have turned into a condom,” Rob said in a British accent.

“How did they not put that on the air?” Howard wondered while laughing.

Post-“Saturday Night Live,” Rob and Adam have continued to work together, starring alongside each other in several films. “He’s been nice enough to include me in his gigantic success story,” Schneider said of Sandler, who shrugged off the statement. One of Rob’s biggest box-office hits came in 1999’s “Deuce Bigalow: Male Gigolo,” a film Schneider said would have never been made had Adam not signed on as an executive producer.

Rob also revealed the original title for the film was “Deuce Baggio: Male Prostitute,” but since the studio didn’t want to spend $12 million on a movie that sounded a lot like “douche bag” they had to change the name.

Sandler and Schneider are currently teaming up with their fellow former “SNL” colleague David Spade for a cross-country stand-up tour. “We’re all kind of older now. Everybody loves each other, most of the time,” Adam told Howard. The group was performing together at a show in Texas just hours before their Stern Show appearance Wednesday morning. They took a red-eye flight to New York and Adam admitted he didn’t get a wink of sleep. He doesn’t mind the hard work, long hours, and sleepless nights, though.

“It does feel like ‘Saturday Night Live’ days of being young and staying up at night and laughing and having fun,” he said.