It took more than just a powerful performance for Jamie Foxx to win an Academy Award for his role in the movie “Ray”—it took Oprah Winfrey. On Tuesday’s Stern Show, Foxx told Howard about the phone call he received from the queen of daytime TV who expressed her displeasure over his partying antics.

“You’re blowing it, Jamie Foxx,” he recalled Oprah telling him. “All of this gallivanting and all this kind of shit, that’s not what you want to do.” Jamie admitted to Howard he hadn’t taken that year’s award season seriously up to that point. Winfrey wanted him to come to Quincy Jones’s house so that he could meet with several black Hollywood actors, including Sidney Poitier. Her mission: to make Jamie realize the opportunity he had before him as an Academy Award nominee, one that many of the actors there that day never had.

“To this day, it’s the most significant time in my life where it was, like, a chance to grow up,” Jamie told Howard.

He specifically remembered what Mr. Poitier (the first African-American to win a Best Actor Oscar) said of his performance in “Ray.” “I want to give you responsibility,” Jamie said in a Poitier-like voice. “When I saw your performance, it made me grow two inches.” 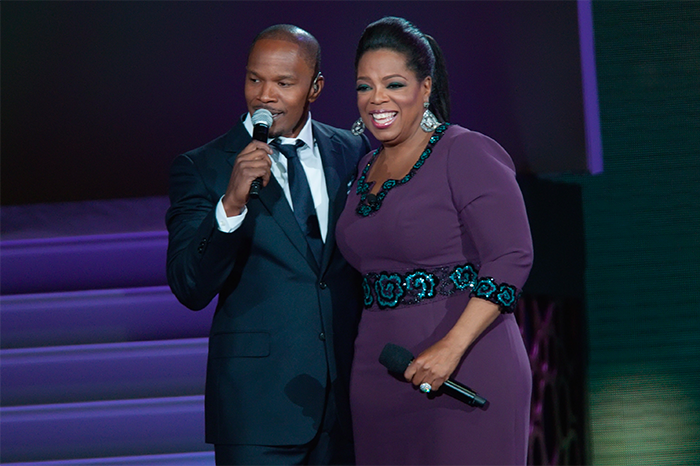 Jamie went on to win the Oscar in 2005 and on the night of the ceremony, a familiar face presented the award to him—actress Charlize Theron. Years prior, Jamie noticed her out at a club and wanted to go over and chat her up. Record exec Andre Harrell stopped him, though, and explained how, in order to talk up a woman as beautiful as Charlize, a guy had to have “a gold statue.” She left soon after and Jamie never got the chance to meet her.

“What was crazy was, the night of the Oscars, she’s the one who presented me with the Oscar. How crazy was that,” Jamie said. Charlize had won the Best Actress Academy Award the year before for the film “Monster.”

Jamie didn’t receive a second Oscar for his performance in 2012’s “Django Unchained,” but he told Howard he was just thrilled to get the part. Other actors like Will Smith and Idris Elba were originally being considered for the title character, but Jamie was able to convince director Quentin Tarantino he could play the gun-slinging slave hero.

“I said, ‘I understand your script,'” Jamie remembered of what he told Tarantino. He prepared for his private meeting with the director by learning a large chunk of the movie’s dialogue and recited it for him on the spot. As if that wasn’t enough, Jamie also offered to provide his own horse for the flick.

“I have a horse and I actually rode my horse in the film,” Jamie told Howard.

Jamie had several talented co-stars in “Django,” including Samuel L. Jackson, Kerry Washington, and Leonardo DiCaprio, whom he called a “superhero” after sustaining an on-set injury. A scene in the movie involved Leo slamming his fist on a dining room table, but Leo wound up badly cut and bleeding after a glass rolled under his hand during one take. He didn’t stop acting, however.

“I said, ‘This motherfucker’s an Avenger.’ It was amazing, the performance,” Jamie told Howard.

He also had high praise for Christoph Waltz, who played Dr. King Schultz in “Django.” Howard was surprised to hear how Waltz needed some of his lines fed to him while filming, but Jamie explained Christoph’s relationship with Tarantino allowed them to work like that.

“Quentin told me something that was amazing,” Jamie recalled for Howard. “He says, ‘I don’t need all of the lines, I need the line.'”