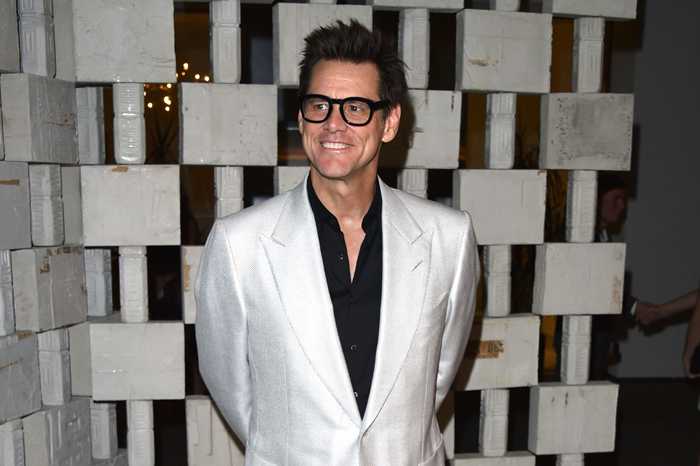 A newly clean-shaven Jim Carrey called in to Tuesday’s Stern Show to tell Howard about his new Showtime series “I’m Dying Up Here.” The revelation that he had gotten rid of his famous bushy beard came after Robin asked the comedian if his facial hair had to wake up along with him for today’s early morning call.

“It left me,” Jim told her about his beard.

“Oh, you shaved it?” Howard asked.

“Yeah, I did,” Jim confirmed, saying all that was left was a big ball of fuzz.

Howard had a recommendation for what Jim could do with his leftover beard trimmings. “What if you made like a paint brush out of your beard hair or incorporated your beard hair into your painting?” he suggested, since Jim is a passionate painter.

“My brush is gone. Now I’m this freaky, no chin dude,” Jim joked.

Though his success as a comedian is these days without question, Jim told Howard he wasn’t such a smash hit while appearing at Yuk Yuk’s Comedy Club in Toronto at just 15 years old.

“My mother dressed me in a polyester suit because that’s how they dressed on the Dean Martin roasts,” Jim said of his stand-up debut. He recalled his “corny” act that included impressions of people from “The Carol Burnett Show.” The crowd and club management didn’t like what they saw.

“They basically just harangued me off,” Jim told Howard. “I didn’t come back for two years. This is my M.O., man.”

This two-year stopgap was the first of a few times Jim would disappear for a while, only to return ready for another shot at something. “I go in thinking I’m going to do it, I fail, I hide for two years, I get strong, I do a ‘Rocky’ thing, and then I come back and slay it,” he explained.

When he came back, Jim had reloaded his act with some new impersonations. But after seeing some professional impressionists perform in Las Vegas, Jim came to the conclusion that he didn’t want to wind up like them. So, he threw out his act and started from square one again. 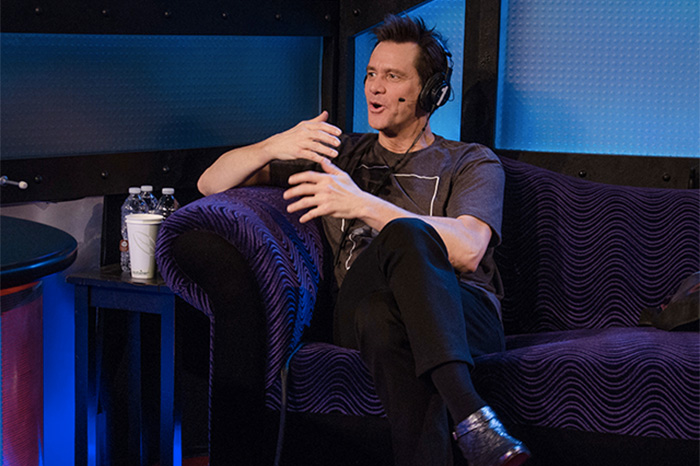 Jim also told Howard about the first time he auditioned at the famed Comedy Store in Los Angeles on the same night that then up-and-coming Bill Maher was trying out in front of the club’s owner Mitzi Shore.

“He had his shit together,” Jim said of Maher. “I went up on stage and the mic fell apart in my hand. I knew I was screwed right out of the gate.”

Jim said while Bill won himself a spot as a Comedy Store regular, he went back to Canada for, you guessed it, two years. During his time away from the stage, Jim began thinking about what needed to change about his act, often times lying in bed trying to come up with an adjustment that would make him a better comedian. And then it hit him.

“I woke up in the middle of the night and shot up in bed and thought, ‘They need to be free from concern,'” Jim said of the audiences he was performing in front of. “It was, like, a clarifying moment.”

Jim’s realization would lead to him coining a phrase that he’s still known for to this day.

“I went up on stage at the Comedy Store and the first thing I did was, ‘Good evening ladies and gentlemen. And how’re you today? Alrighty then!'” Jim remembered. “I began to play the guy who was free from concern.”

Even though many of his fellow comedians at that time had hardcore drug habits, Jim told Howard he only “experimented” with controlled substances. Howard wondered if he ever tried telling jokes while high.

“I only went up [on stage] maybe twice … after smoking a joint. I slaughtered. I mean, I slaughtered the house,” Jim recalled.

He also remembered comedian Sam Kinison in the audience that night. The two eventually became great friends, but Jim recalled for Howard one of the first times he ever saw Sam perform during a 2 a.m. stand-up set.

“I literally was dumbfounded,” Jim said of Sam’s act. “Just tears pouring down my face, out of control, laughing like a hysterical lunatic and he came off stage and I just said, ‘You’re it, man.'”

Their friendship nearly turned into a professional partnership at one point. “We were gonna go on the road and do tent shows before I became famous,” Jim said.

Evangelical tent revivals were how Kinison once legitimately made his living, but he and Jim were planning on parodying those movements for audiences.

“He was gonna teach me how to preach. He was going to call me ‘Lightning Boy,'” Jim said with a laugh.

However, Sam’s fast-paced living proved to be a speed Jim wasn’t willing to go through life at and the two eventually took separate paths as their careers continued to grow.

As Jim’s star continued to climb, he eventually got the call most comedians only dream of—a chance to audition for “Saturday Night Live.” However, Jim told Howard his tryout got off to a bad start when he showed up at the NBC offices while someone high above was threatening to jump off the building.

While he and Howard had discussed the incredible story before, this is the first time Jim revealed how heavily the events of that afternoon weighed on his mind during the doomed “SNL” tryout. “That’s all I could think about through the whole audition,” Jim said.

“That was probably me. I was working there back then,” Howard joked.

Jim didn’t join “SNL” but he did become a household name on the Fox sketch series “In Living Color,” leading to starring roles in the movies “Ace Ventura: Pet Detective,” “The Mask,” and “Dumb and Dumber.” As one of the biggest box office draws in the history of cinema, Jim said he can now wait for the “beautiful stuff” to find him and hinted that he’ll soon be back on the silver screen.

Howard wondered if Jim ever longed to return to the stage and try stand-up again.

“I probably would at some point,” Jim said. “I don’t really feel like doing it right now. I’m painting.”

Painting is one of the things Jim points to as explanation for why he’s so happy these days. It’s a passion he’s decided to fully immerse himself in.

“That’s the key—the key to happiness is total involvement,” Jim told Howard. He also explained that before anyone can achieve true happiness, they must realize how many material things they need (or don’t need).

“Get enough stuff,” Jim said. “What do I need, a double-decker tennis court? I don’t use the one I got!”