Seth Rogen returned to the Stern Show on Monday to talk about the second season premiere of “Preacher” on AMC, a series he executive produces along with his longtime writing partner Evan Goldberg. Most are aware of Seth’s history of getting high but during his latest visit with Howard, he actually offered a word of warning about weed edibles.

“Edibles are too strong, I think,” Seth said while discussing his smoking habits. “I gotta say, I’ve done a lot of drugs in my life. The most, like, negative drug experiences I’ve ever had in my life are from weed edibles.”

One such negative experience happened recently when Seth went to see “Rogue One: A Star Wars Story” with his wife and father-in-law. He told Howard he ate what he considered to be “an appropriate amount” of a marijuana-laced gummy. However, the dosage proved to be much more potent than he expected.

“I thought I was gonna fucking die! I turned to my wife, like 20 minutes into the movie, and I was like, ‘Is this the most intense movie that’s ever been made?'” Seth said with a laugh. “My heart was, like, beating out of my chest.”

Seth’s not the only one passing on pot edibles, either. He told Howard his friend and fellow pot aficionado Snoop Dogg once told him, “I don’t fuck with edibles ’cause they ain’t got no off button.”

Aside from seeing movies while high, Seth’s also made several movies about getting high, including 2008’s “Pineapple Express.” Howard played an audio clip from that film in which the profanity is dubbed over with different dialogue in order to censor out words that can’t be broadcast when the movie airs on basic cable. For example, one line where Rogen repeatedly calls his co-star James Franco an “asshole” was replaced with the word “casserole.” Seth told Howard those toned-down lines were actually recorded by him and James.

“We were so amazed that they were going to put ‘Pineapple Express’ on television that we actually went in and did that because we thought it was so funny,” Seth said. “It’s so fucking surreal and bizarre that we’re making a version of this movie that literally makes no sense.” 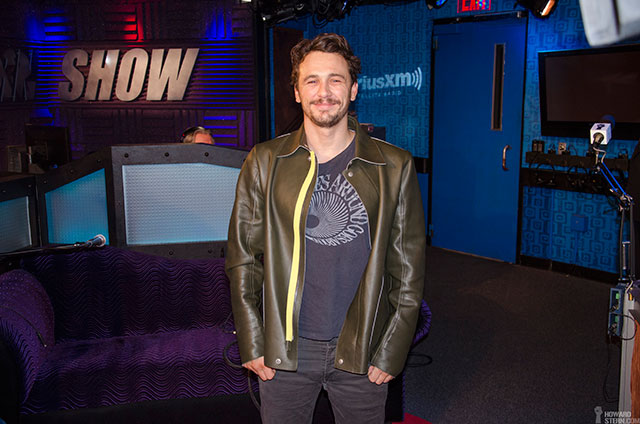 James Franco on the Stern Show in 2014 Photo: The Howard Stern Show

Seth said the cable version of “Pineapple Express” also has him saying “melon farmer” instead of “motherfucker” and dubs in the French term “j’accuse” over another R-rated line that he couldn’t remember.

Seth reunites with James Franco in the upcoming movie “The Disaster Artist,” which chronicles the making of the infamous 2003 movie “The Room.” James pulls double duty, playing “Room” director and star Tommy Wiseau while also directing the biopic. And according to Seth, James went full method for his role.

“The first two days of filming, I could not even talk to him,” Seth continued. “Every time he’d talk to me, I would like, break into hysterics.”

But unlike other method actors, James did answer to his own name and would talk to Seth about things in his personal life. But the accent always remained.

Art also imitated life in Seth’s film “Superbad,” which he wrote with Evan Goldberg when they were still teenagers. Seth explained there are several scenes in that flick that got added to the script after he or one of his buddies experienced it in real life, like when Michael Cera pukes on Jonah Hill or when a girl on her period accidentally bleeds on Jonah’s leg while dancing with him.

“Almost everything in ‘Superbad,’ like the physical, funny things that happen, are based on shit that happened to us in high school,” Seth told Howard about how he and Evan came up with some of the movie’s funniest scenes.

It was Seth’s mom, though, that penned a joke about Christopher Mintz-Plasse’s character McLovin being busted for sleeping with a minor after the cops (who think he’s the age indicated on his fake I.D.) catch him in bed with a girl from his grade.

“My mom pitched a great statutory rape joke,” Seth said with a laugh, adding she came up with the idea after reading an early draft for “Superbad.” “Yeah, it’s pretty dark but a solid joke.”

It took years of hard work and stick-to-itiveness before Seth and Evan’s script for “Superbad” got made into a feature film. That’s one reason Seth isn’t all that angry about an impostor script that was recently making the rounds in Hollywood that had his and Evan’s name on the cover sheet. The script was actually written and circulated around town by two screenwriting hopefuls who knew their project would get a lot more buzz if people thought it was Seth’s next movie.

“It is shocking how many people it got to,” Seth told Howard. He wasn’t aware of the fake script until producers Phil Lord and Christopher Miller got a copy and emailed Seth. “They were the only ones who suspected that maybe something was weird,” Seth said of Lord and Miller.

“We just have a pretty, like, distinct way we write,” Rogen said of his and Evan’s previous projects.

While Seth regrets film execs and producers wasting their time reading something he didn’t write, he told Howard he’s not upset by the stunt. “I get it, man. It’s fucking hard to break into Hollywood,” Seth said.