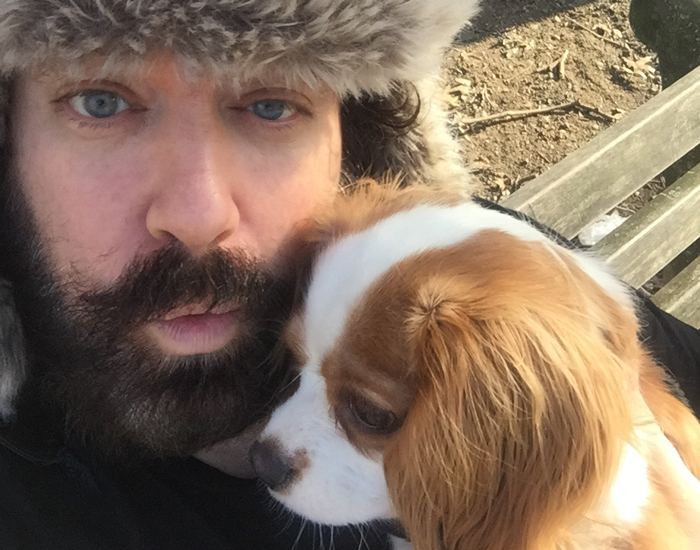 Benjy Bronk outside with his dog Photo: The Howard Stern Show

Mysteries abound about Stern Show staffer Benjy Bronk but on Wednesday morning he cleared one thing up for his coworkers – where he currently lives.

“Right now I’m in the dorm,” Benjy said. According to Benjy, the living arrangement is only temporary and he must move out before the college student who actually lives there moves back in at the end of the school’s winter break. In the meantime, though, Benjy’s enjoying his own bathroom, a “dressing room,” and a location to die for.

“It’s the most beautiful location I’ve ever lived in in New York,” he told Howard. “If I could stay there it’d be so wonderful.”

Benjy isn’t living with a college roommate, per se, but he did manage to work out a way to have his dog stay in the dorm with him. Howard wondered if his pet could be comfortable in such close quarters with Benjy.

“She’s great, I love her,” Benjy said of his dog. “I think I’m taking pretty good care of her.”

Some on campus have supposedly stopped him to ask if he was an enrolled student, but other than that his stay in the dorms has been without issue. However, there was something else some wanted Benjy to explain.

“He comes in when it’s 10 degrees wearing a short-sleeve shirt and no fucking coat,” Ronnie “the Limo Driver” Mund told Howard. New York is currently experiencing one of the coldest winters in recorded history but Benjy offered a reason for why he doesn’t bundle up on his way to work.

“When I leave the dorms I have about five seconds to get to the car,” Benjy told Howard, saying he usually takes a taxi to the office in the morning. Since cab interiors tend to be too hot for his liking, Benjy prefers to ride to work without a coat on, but he makes sure to pack one in his bag to wear later.

“I just don’t get it,” Howard told Benjy with a laugh.

Howard also mentioned it was the 20th anniversary of the first time Benjy was ever on the air. The former intern has told countless surprising stories since then and, after today’s latest revelations, it’s safe to say Benjy will have plenty more stories to tell on the Stern Show for years to come.