Plus, hear Sour Shoes reunite Mike and the Mad Dog with his impressions of the two sportscasters 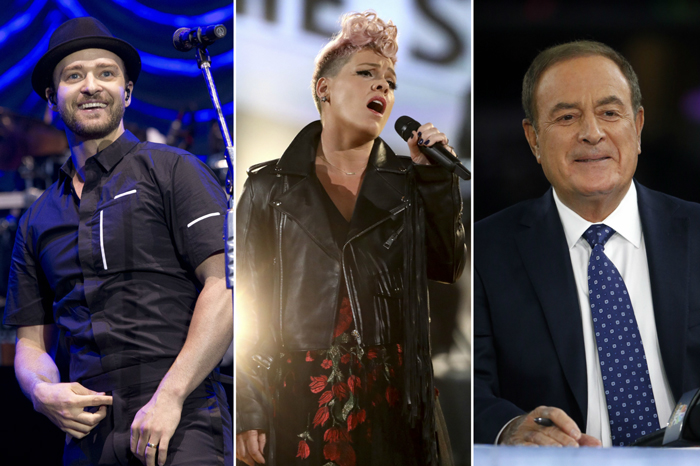 Anyone looking to lay some bets down during Super Bowl LII will have more than just the football game to gamble on. Howard and his in-studio panel analyzed the many proposition bets being offered this year, starting with the amount of time it takes pop singer Pink to complete the national anthem. The current odds have her going over two minutes as the safer bet, but Howard gave his reason for why it’d be wiser to take the under.

“Pink’s no nonsense. She can really sing,” he said of the former Stern Show guest, explaining she doesn’t need to add any unnecessary vibrato in order to pad out her performance time — she just sings the song and sings it well.

Calling this year’s Super Bowl for NBC are Al Michaels and Cris Collinsworth and bettors can get action on how many times the two will call the New England Patriots a “dynasty.” The over/under sits at 2.5 but Howard wondered if he could impact that prop bet since Al is a regular Stern Show listener.

“Why don’t we just call him and tell him to say ‘dynasty’ a couple of times?” Howard joked.

In 2017, Joe Buck stopped by the Stern Show and busted a few prop bets aimed at him and what he’d say on air while calling Super Bowl LI. “I could literally take down Vegas myself,” Joe said with a laugh before promising he wouldn’t call quarterback Matt Ryan “Matty Ice” nor would he mention Aaron Hernandez or Michael Vick during the broadcast.

The prop bet that caused the most contention on Wednesday’s show had to do with Justin Timberlake’s halftime concert, the details of which are being kept carefully under wraps. The names of several potential surprise guests are being bandied about by linemakers, including Jimmy Fallon, Nelly Furtado, Jay-Z, Janet Jackson, or a full-on ‘NSync reunion. Howard thought the easy pick was Fallon since he and Timberlake are pals and he’ll be in Minnesota for a special “Tonight Show” anyway, but Stern Show staffer JD Harmeyer argued there was no way Jimmy would be the one to show up on stage during the halftime show.

Also on the line is how Justin will make his big Super Bowl entrance: zip line, car, motorcycle, jetpack, dog sled, parachute, or will he simply walk out?

“He’s either coming up from the bottom [of the stage] or being lowered in,” Robin Quivers said confidently. “He’s not gonna risk his life for this.”

All the talk of sports betting inspired Sour Shoes to call up with dual impressions of former radio partners Mike Francesa and Chris “Mad Dog” Russo. Listen to the Wack Packer’s spot-on voices in the audio clip (below).

There are many on the Stern Show staff pulling for the Philadelphia Eagles to win on Sunday but perhaps none more than Will Murray. Last week, he showed off his singing abilities while teaching Howard and Robin the words to “Fly, Eagles, Fly,” the NFL team’s longtime fight song. The only problem: quite a few Philly fans wrote in to say he got the words wrong, singing “fly” in one point of the tune when he should have been singing “fight.”

“I played the goddamn song at my wedding,” Will shouted. “I’m a huge Eagles fan, alright?”

He then gave it a second shot and ended by telling Howard he’s putting $100 on the Birds to finally win the big one.