“I have an order of things and that's what I do,” Stern Show staffer explains 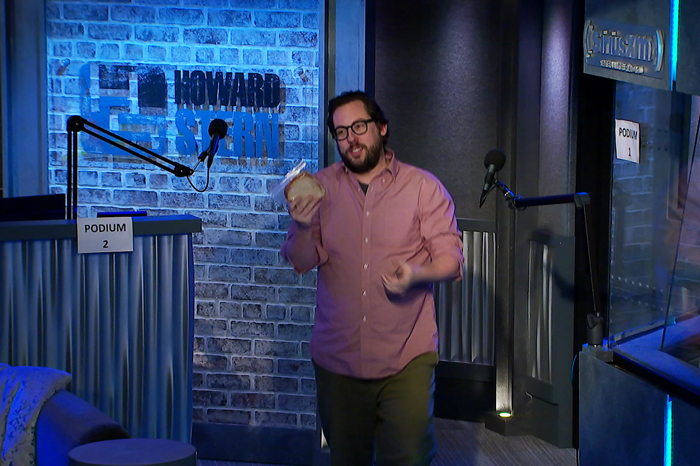 JD Harmeyer had an audience watching him as he ate his lunch on Tuesday afternoon — his boss, Howard Stern. Since JD’s office is encased in glass, it was easy for Howard to peer in and see what his staffer was chowing down on, but he noticed something strange that JD was doing. Though he had packed himself a chicken sandwich, an apple, and a bag of Pirate’s Booty, JD ate each item one at time and in a specific sequence.

“I have an order of things and that’s what I do,” he explained on Wednesday’s Stern Show after Howard told Robin what he had observed. Not until he was completely finished with his sandwich did JD open his Pirate’s Booty.

“I am so fucking dumbfounded by that,” Howard said.

It’s not just at lunch that JD segregates his food. Howard gave him a scenario where he’s having dinner out and is presented with a plate of chicken, carrots, and mashed potatoes. JD quickly determined he would eat the chicken first, followed by the carrots, and then he’d finish with the potatoes.

Something else Howard noticed was that JD’s sandwich didn’t appear to have any meat in it, saying it just looked like two pieces of bread stuck together. “It’s thin-sliced chicken!” JD yelled on his office mic. “We get a limited amount!”

The staffer then entered the studio to show Robin a ham sandwich he brought in that seemed to have a little more substance to it but still only contained two slices of meat. Howard promised he’d be back outside of JD’s office today to watch him eat lunch again and this time invited Robin to join him.

“Come watch with me. You’ll love it,” Howard told her with a laugh.