Singer-songwriter and longtime fan of Howard also talks her band, her wife, and her friendship with Elton John

Folk rock singer-songwriter Brandi Carlile made her Stern Show debut on Wednesday morning, performing live alongside her two bandmates, twins Tim and Phil Hanseroth. The bond Brandi and the brothers have with one another stretches far beyond their music — they’re also technically family. Phil married Brandi’s sister Tiffany and the two have a child together. And while Tim didn’t wind up with one of Carlile’s siblings, he does live on the same 70-acre compound that Brandi and Phil’s families share outside of Seattle.

“We’re actually more like a cult,” Brandi told Howard with a laugh. “We just ride A.T.V.s to each other’s house through the woods.”

Pearl Jam guitarist and Brandi’s frequent collaborator Mike McCready also lives on the property. Her family-band connections don’t end with the twins, either — the cellist that Brandi has been playing with for nearly 15 years is now married to her wife’s sister.

That she keeps her music and her family closely connected should come as no surprise since Brandi told Howard it was her mother’s love of singing that inspired her to perform herself. After growing up watching her mom play small gigs in local bars, Brandi tried singing in front of a crowd for the first time at just 8 years old, performing Johnny Cash’s “Tennessee Flat Top Box.” The applause she earned from her audience that night was all it took for Brandi to fall in love with making music. 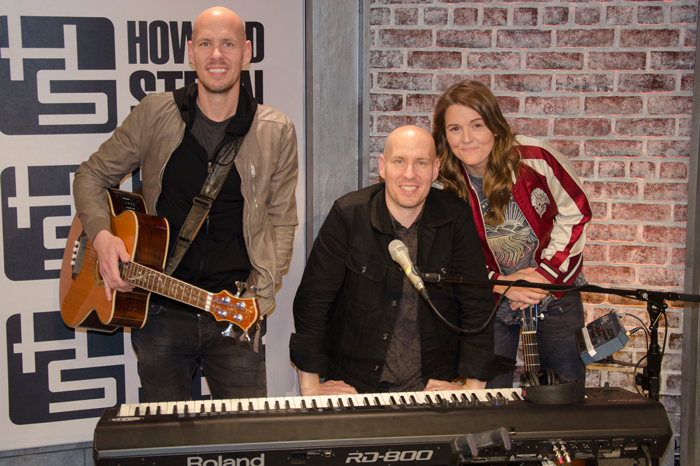 She spent years busking around Seattle and asking restaurants if she could perform live for patrons even if it meant she had to do it for free. “I’m a real hustler,” she told Howard. Slowly but surely her determination paid off and Brandi began playing bigger venues with bigger crowds. Howard asked if playing for people ever made her nervous.

“It’s terrifying every day and it’s awesome,” she told him. “The adrenaline spikes are pretty intense. You’re always risking total humiliation every time you open your mouth.”

She also told Howard that her being openly gay has never had a negative effect on her career and that her fans are truly supportive. Brandi’s sexuality was also embraced by her friends and family when she came out at 15. She’d never met another lesbian in real life up to that point, but she admitted seeing Ellen DeGeneres tell the world she was gay on her ‘90s TV sitcom made a huge impact on her decision to tell her own truth. 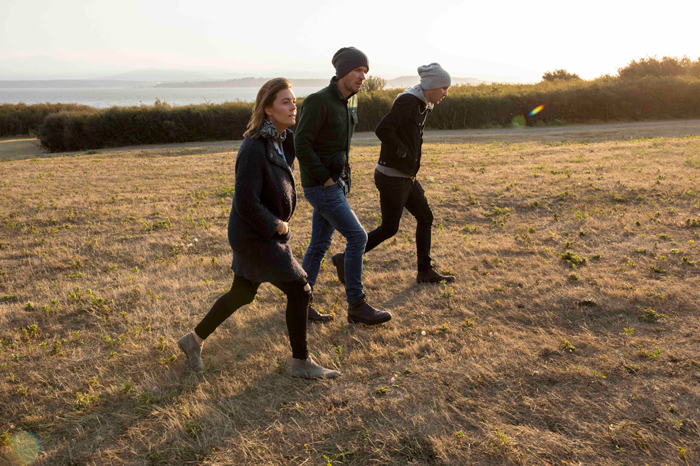 At the time of that episode’s airing, Brandi actually had a boyfriend on her school’s baseball team named David. “I secretly taped the Ellen DeGeneres coming out episode and kept it for years labeled ‘David’s Baseball Game’ so no one would find out,” she told Howard.

One of the only times Brandi’s sexuality caused a negative experience for her came when a pastor refused to baptize her. “But not until my friends and family were gathered to see the baptism,” she explained. “So, that was really traumatic for me. That set me back pretty far.”

Although Brandi wasn’t baptized that day, she did come away from the incident stronger than she was beforehand. “It gave me huge tools for helping other gay kids and gay people come to grips with whatever their journey is.”

Brandi and her wife Catherine are parents to two children, a daughter named Evangeline and a son born just last month named Elijah. Howard commended Brandi for the video (above) that she released on YouTube showing her singing her song “The Mother” to three-year-old Evangeline. The video ends with Evangeline sweetly giving her mom a kiss.

“I was really proud of it and proud of her,” Brandi told Howard. “I did say, ‘When I get done singing, give momma a kiss,’ to be fair. But, you know, they don’t remember that.”

Something else Brandi does that Howard appreciates is sing songs with three-part harmonies in them, including the Crosby, Stills, and Nash classic “Helplessly Hoping.”

“Anytime where you can sing three-part harmony on every word, I am in,” Brandi said before covering the song with the twins live in the Stern Show studio. Hear their performance in the video (above).

While performing “Helplessly Hoping” at a show in Los Angeles, Brandi and the boys we stunned to see none other than Stephen Stills himself standing in the crowd. The rock star never reached out to tell them he would be coming to see them perform and they hadn’t told him they planned on doing his song.

“I just see this guy in a blazer stand up and fold his arms across his chest,” Brandi told Howard, adding he was the only one in the audience who stood up as they sang the tune. As intimidating as it was to play Still’s song as he watched her, Brandi said he later came backstage to say he enjoyed their rendition.

Stills, however, isn’t the most challenging artist to cover, according to Brandi. That distinction belongs to Led Zeppelin frontman Robert Plant.

“Robert Plant’s the hardest guy to sing,” Brandi told Howard, explaining that hitting some of the notes in “Going to California” literally keeps her up at night. “When you get up that high … you are right on the verge of total humiliation.”

It’s not just Brandi covering other musicians’ songs these days. Now, big name acts are doing their take on her music, including Adele, Pearl Jam, Kris Kristofferson, Chris Stapleton, and Dolly Parton, all of whom Brandi said she was honored to hear sing her songs. And when Brandi’s idol Elton John phoned to tell her how much he enjoyed her music, she confessed to Howard it was a moment she’ll never forget.

“I can’t even talk about it. I worship Elton John,” she said with a smile. “I fell in love when I was 11. Like, there wasn’t a square inch of my wall that didn’t have a picture of Elton John on it.”

As if a phone call wasn’t good enough, Sir Elton also gifted Brandi with a bottle of Château Lafite Rothschild wine from 1981, the year she was born.

Brandi saved Elton’s gift for a special occasion — her wedding day. On Wednesday morning, though, her drink of choice was Jameson which she ripped a shot of ahead of her live performance of “The Joke,” off her new album “By the Way, I Forgive You.” Watch her performance of the song in the video (top).

The lyrics for “The Joke” came about after Brandi met a fellow musician’s teenage son at a Nashville dinner party and noticed how self-conscious he seemed to be. Brandi wanted to somehow tell him his best days were ahead of him, but rather than call or write a letter she told him by by writing him a song.

“I guess my version of a letter or a phone call is a song,” she explained.

Howard praised Brandi and her stellar in-studio performances on Wednesday, telling her he only wished she could have wound up on his radar sooner.

“In my mind, you always knew me. I have loved you since the ‘90s,” Brandi told him. “This is the best interview, by far, we have ever gotten to do.”

Check out Brandi Carlile’s new album “By the Way, I Forgive You” and for ticket and tour info visit brandicarlile.com.