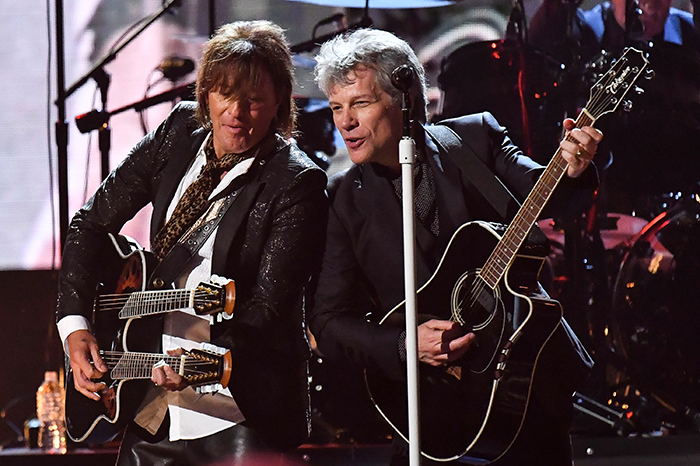 After weeks of anticipation, Howard finally traveled to Cleveland over the weekend to induct Bon Jovi into the Rock & Roll Hall of Fame and his speech was met with widespread acclaim.

“I was really happy for Jon. It meant a lot to him,” Howard said of the induction ceremony on Monday. “It really did move me to be there with them.”

Despite months of planning for the big night, Howard even revealed he made a last-minute change to his speech after speaking to Robin Quivers.

Unfortunately, Robin was unable to attend the event after coming down with a cold — but that didn’t stop her from offering a few wise words to Howard. “I said that, you know, very rarely does a fan get to actually induct somebody into the Rock & Roll Hall of Fame,” she recounted.

Taking the sentiment to heart, Howard added a moment of sincere praise to his speech. “I played their music for years on the radio and I always considered it a great privilege to have a job where I can celebrate rock and roll and play the work of these fine musicians,” he told the audience Saturday night. “So, on behalf of all fans like me who depend on music to help us through our days, I say thank you, thank you, thank you from the bottom of my heart, Bon Jovi.”

That wasn’t the only change he considered, either. While Howard ended up singing a few lines from the band’s hit “Wanted Dead or Alive” a capella, he revealed that at one point he considered having Eric Clapton or John Mayer join him onstage only to jokingly kick them off. Instead, the audience offered an eager chorus, singing along with him on the rock anthem.

Setting the hassles of traveling and staying in a noisy hotel aside, Howard said he was pleased with how the evening turned out. “It was nice to see those guys so happy,” he said.

And it seems the new Rock & Roll Hall of Fame inductees were pleased with their choice of speaker, as well. As a token of his appreciation, Jon even sent Howard and his wife Beth a set of Bon Jovi watches along with a note of thanks.