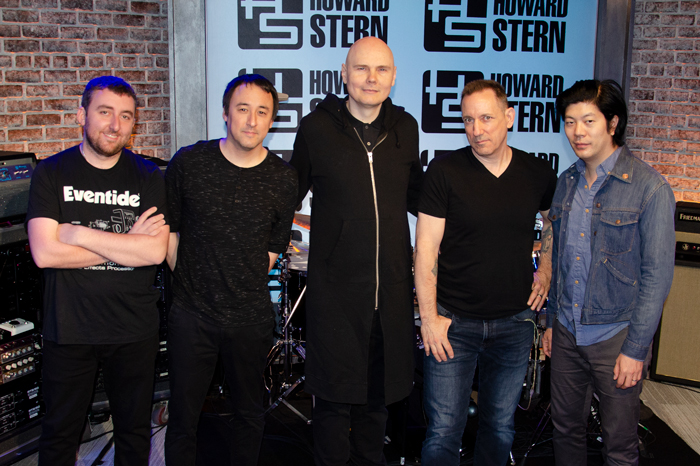 It was at an Asian fusion restaurant in Beverly Hills that bandmates and longtime friends Billy Corgan and James Iha decided to finally bury the hatchet between them after not speaking to each other for over 17 years. Their meal marked the first step toward getting the Smashing Pumpkins back where they belonged – making music with one another in a recording studio again.

“I didn’t know if this would ever happen,” James admitted to Howard on Tuesday. The current members of the Smashing Pumpkins all came into the Stern Show studio together ahead of their upcoming “Shiny and Oh So Bright” tour and just days after dropping their first new song “Solara.”

Billy told Howard what it was like making new music with his band again after so much time had passed and recalled a moment he experienced while they were recording in the studio with famed producer Rick Rubin.

“I looked across the room at James … it was like looking through a tunnel back through all those years and I just was like, ‘I can’t believe we’re back in the same room and we’re making music. This is so cool,’” Billy said.

Whatever differences the Smashing Pumpkins had throughout their history, their music never caused any conflicts within the band. “We never really disagreed about music,” drummer Jimmy Chamberlin said. “As far as the music goes, I mean, we’ve always had a common ground.”

D’arcy Wretzky, the band’s original bass player, was absent from the Stern Show studio Tuesday morning, however, and will not be a part of the Smashing Pumpkins upcoming tour. Despite some of D’arcy’s recent claims, Billy told Howard he made every effort to convince her to come back to the band and that their early phone conversations were actually rather pleasant.

“Every time I talked to her on the phone she was absolutely lovely, she was sweet, she said things she’d never said to me,” Billy explained.

Since the Smashing Pumpkins’ catalogue includes so many challenging songs, Billy said he asked D’arcy if she still felt comfortable and capable of playing her parts. “I didn’t want to put her in a position where she looked bad,” Billy told Howard. According to Corgan, though, D’arcy brushed his questions off.

When it came time to discuss the business side of the reunion, D’arcy took issue with what was presented to her. “She just didn’t like the way it was going to be set up,” Billy continued. “I’m not here to talk about that, per se, but it wasn’t unfair. It wasn’t ridiculous.”

With a concert tour agreement at stake, the band made the difficult decision to move forward without D’arcy. “We all made that decision together,” Billy said. “The thing we know how to do is make music so we’re here because we want to play.”

In addition to making new music, Billy said the Smashing Pumpkins will be playing all of their hits on the upcoming tour in an effort to “refocus on that period” of their lives. On Tuesday, they treated the Stern Show audience to a live performance of “Bullet with Butterfly Wings” off of their 1995 chart-topping album “Mellon Collie and the Infinite Sadness.”

Billy also opened up to Howard about how his father supposedly became jealous about the Smashing Pumpkins’ early successes. “He was really, really weird about it,” Corgan said. After gifting his dad with the band’s first album “Gish” Corgan Sr. told his son it sounded like he “split a lot of hairs,” meaning he ripped off other artists in order to create his own music.

He delayed sending their second album “Siamese Dream” to his father for fear he’d again put down the band’s music. But instead, Billy’s dad had much more encouraging words for the now undeniable rock star. “He called me and said ‘I don’t know who you are … I don’t recognize the person that’s singing but it’s incredible,’” Billy told Howard. “What he was saying was ‘I didn’t know this person was in you … I didn’t know you were capable of this,’ basically.”

Billy made quite a few headlines after visiting the Stern Show in October and telling Howard about his experience with a shapeshifter. On Tuesday morning, he doubled down on that story again. “I know it happened. In fact, it happened twice,” he stated.

Though he did not want to divulge too much information, he was willing to share just a few new details about what he saw. “I will say, since we’re on radio, that the story is even more fantastical than you think,” Billy said with a smile. “The person was naked.”

Howard supposed that meant the shapeshifter was a woman Billy was romantically involved with, but the rock star refused to say one way or the other. All he could confirm was that this indeed happened.

“Maybe I had a hallucination, but I saw what I saw,” Billy maintained.

Aside from being floored by Billy’s shapeshifting adventures, Howard was equally thrilled to hear the Smashing Pumpkins play their new song “Solara” live in the studio. Billy admitted it wasn’t easy hitting his vocals this early in the morning but both Howard and Robin commended the band for rocking out just as hard today as when they first started out.

“If you play this song while you’re making love to your woman, she will shapeshift for you,” Billy joked.

The Smashing Pumpkins kick off their “Shiny and Oh So Bright” tour July 12. For dates and to purchase tickets click here.

QUIZ: Which Wack Packers Would Take In Wendy the Slow Adult If She Got Evicted?