PHOTO: Jeff the Drunk Has a New ‘Blister’ on His Leg

Robin Quivers was watching television before work on Tuesday when she happened to catch a commercial for a new medication that made her stop and take notice. “I heard a commercial this morning for a drug for people who laugh inappropriately,” she told Howard. “I immediately thought of JD.”

Stern Show staffer JD Harmeyer has long been laughing at seemingly random moments, including Tuesday morning as Howard passed him in the hall and said “good morning.”

“I just find odd things funny,” JD explained. But is a better explanation that he suffers from pseudobulbar affect, treatable with the medication Robin saw an ad for on Tuesday morning?

Pseudobulbar affect, or P.B.A., is characterized by involuntary and uncontrollable laughing or crying and millions of Americans reportedly exhibit symptoms that suggest they have P.B.A. Everyone in the studio on Tuesday already knew about JD’s laughing fits, but his co-workers were surprised to learn he occasionally cries without warning, as well.

“I’ll tear up,” JD revealed, telling Howard he never cries all too hard. However, while sitting there in the studio, JD’s eyes began to water without explanation. 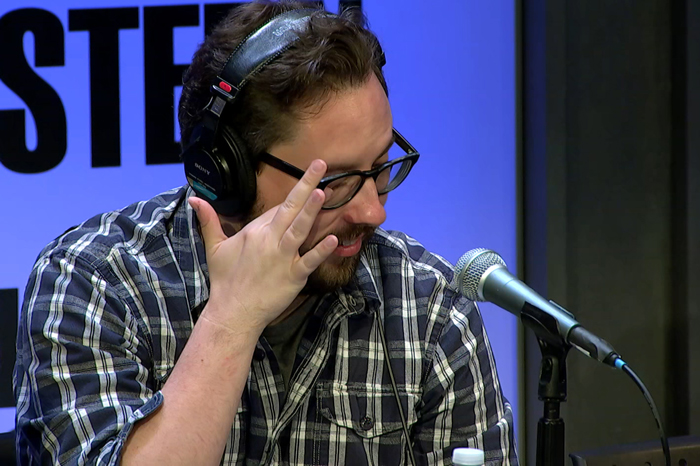 Since P.B.A. is often brought on by a brain injury, Howard wondered if JD ever experienced any head trauma. “Apparently I did fall down the stairs once when I was like really young,” JD told Howard.

A real-life physician later called in who specializes in palliative medicine and sees patients with P.B.A. frequently. While he didn’t think JD needed to be on any medication for whatever his condition may be, he didn’t rule out P.B.A. as the cause of JD’s uncontrollable laughter and crying.