Gary Dell'Abate has a rough day in the studio 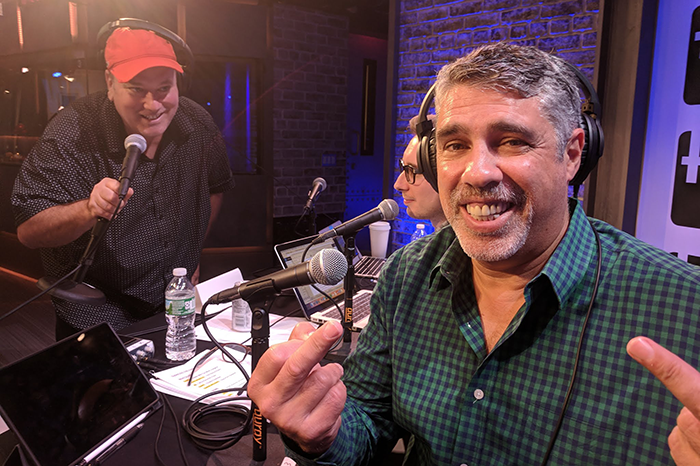 Gary Dell’Abate probably wishes he called in sick Wednesday morning after taking a whopper of a beating over the course of the show—and for no one reason in particular, either.

Things began to go downhill for the Stern Show executive producer after he chimed in on a conversation between Howard and Robin early in the show about their least favorite radio call letters.

While Howard reminisced about his difficulties with WWWW in Detroit, Gary had another station in mind. “I thought the other bad call letters was a station that we were on in San Jose. It was KOME,” he said. “They would say stupid shit like, ‘Here’s another KOME shot.'”

Howard was baffled by his interjection. “What’s the matter with him, Robin?” he asked.

“That’s something people remember. It’s got a sexual overtone,” Howard added of the KOME call letters. “Gary, are you serious? Come on, take that back.”

“The whole idea is to get these call letters stuck in peoples’ heads,” Robin agreed.

Things didn’t get any better for Gary when a longtime listener called in to offer a couple of his favorite Stern Show moments from the past 15 years, one of which was Sal Governale’s parody of the smash hit song “Despacito” entitled “Dell’Abito.”

Per the listener’s request, watch Gary’s face as Howard plays the song (below):

After a short reprieve, the spotlight once again returned to Gary when Stern Show correspondent Wolfie phoned in to tell Howard about some odd behavior he once observed while at the studio.

“Last time I was up there, I noticed Gary was kind of, like, pacing back and forth before he went into the studio and then he started clearing his throat,” he recalled. “The weird thing was, he stopped in front of the green room and he sticks his head inside the green room to start coughing all over the place.”

Gary admitted he does lean into the green room in an attempt to deaden the sound of his coughing. He recently revealed he began taking medicine in hopes of alleviating the issue, but his co-workers have yet to see much improvement.

Moreover, Benjy Bronk pointed out something he noticed which he thought could be aggravating the situation. “Your jaw muscle constantly is, like, moving … I don’t know if it’s a nervous thing, but that might produce the spittle,” he hypothesized.

“It’s like a bullfrog,” Sal described with a laugh.

Howard praised Benjy for the observation. “Maybe that’s where the mucus is generating from, he said. “Maybe Dr. Benjy knows something.”

Understandably, Gary simply wanted to escape the attention. “Is this show going to fucking end?” he asked.