However, Howard’s co-host claims she has nothing in her inbox from Pinsky 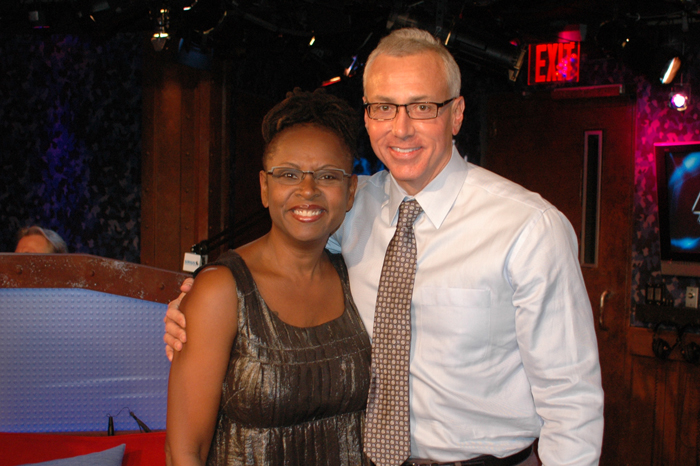 Robin Quivers and Dr. Drew Pinsky together in 2009 Photo: The Howard Stern Show

It was a classic case of he-said, she-said on Wednesday’s Stern Show after Robin Quivers denied ever receiving any email invitation from Dr. Drew Pinksy to go to lunch with him. But that’s not the case according to Dr. Drew who stated on Tuesday’s Wrap Up Show he’s tried to contact the Stern Show co-host several times.

“He’s full of shit, Howard,” Robin said on Wednesday morning after hearing Drew’s side of the story. Though she recalled Dr. Drew suggesting they schedule a get-together several years ago, she told Howard he hasn’t asked her out since then. Robin even did a quick search of her inbox and returned no recent unread messages from Pinsky.

“It could be going to your spam,” Howard told Robin.

“Could be. If I was sorting my mail I’d put him in spam,” Robin said with a laugh.

Comments like that made Howard wonder if Robin would even want to take a lunch with Dr. Drew. “I would have gone to lunch with him, you know, when he first asked. But this is years now,” Robin said. “I figured he would’ve made it happen if he really wanted that. It’s not me, it’s him. He’s saying something he doesn’t really want to happen.”

But perhaps the real reason Robin is apprehensive about hanging out with Dr. Drew has something to do with his 2009 book “The Mirror Effect” in which he gave Ms. Quivers a 34 on his celebrity narcissism test — the highest score of anyone he wrote about.

“I thought that was a silly test and certainly you don’t base conclusions on one questionnaire when you’re writing a research book,” Robin continued.

Dr. Drew was back on the Wrap Up Show on Wednesday and maintained he reached out to Robin at the right address and still hopes to take her out to lunch soon. But both Jon and Gary offered Drew the same advice on how to handle the situation: just give up.