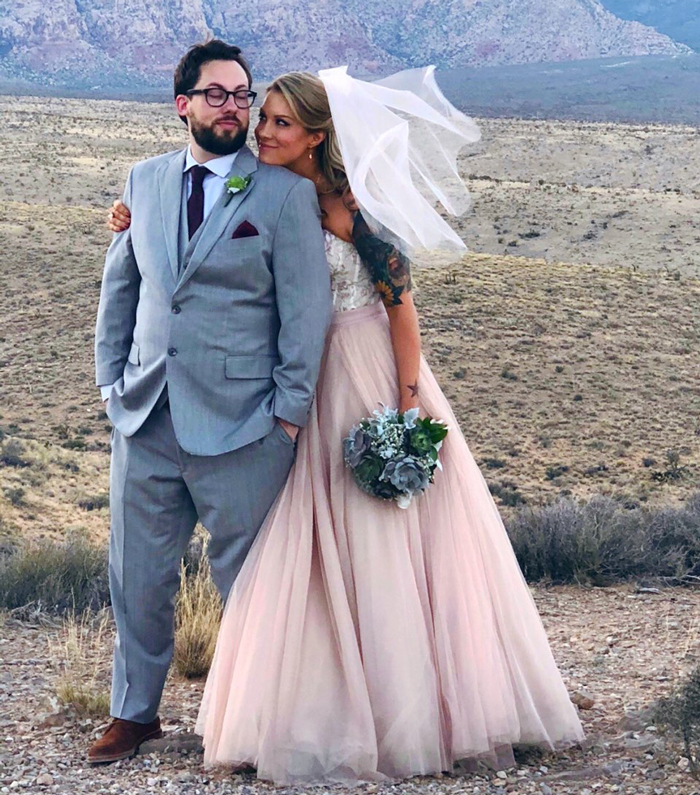 JD Harmeyer is officially a married man! The Stern Show staffer wed his beautiful bride just outside of Las Vegas with 10 relatives in attendance to bear witness to the joyous occasion.

JD donned a grey three-piece suit with brown shoes to the ceremony and revealed he got a facial beforehand but suffered a small panic attack due the use of hot towels during his treatment.

That didn’t stop him from walking down the aisle, though, and delivering a revised set of vows which proved far more eloquent than his first attempt, thanks to some assistance from Howard and Robin.

“You helped me realize what vows actually were,” JD admitted on Tuesday, adding he “out-kicked [his] coverage” with his wife.

The experience was so moving JD even shed a few tears after hearing both his mother and father begin to cry. “I held it together and then we walked back up and I saw my dad crying and I just broke down,” he recalled.

After exchanging their rings, the newlyweds went out on the town in Sin City where JD tried his hand at blackjack before losing $40 in five minutes and calling it quits.

He didn’t find any more luck in the bedroom that night after an evening full of celebrations, but he assured Howard the marriage was promptly consummated the very next morning once the two had fully rested.

Despite the fact that none of his co-workers were invited to the wedding, a few opted to get JD presents anyway. Jon Hein and Ronnie Mund, who planned JD’s bachelor party, both gave checks. Gary Dell’Abate, meanwhile, had something else in mind.

“I said I would take them to any restaurant that they wanted to go to and take them out to dinner,” he explained.

“Is that a present?” Howard asked, joking that now the couple had to go out with him.

Gary insisted he gave Mrs. Harmeyer a choice, though, and JD vouched for him. “My wife does love Gary,” he said.

Now that the wedding is over, Howard wondered if the discussions at home had turned toward having children.

While JD said there was “no talk of kids,” his wife does want a dog, so there’s no ruling out a new addition to the Harmeyer family.