When Adam Sandler’s new Netflix special “100% Fresh” premieres next month, fans will get to see the comedian return to his roots as he steps back on stage with not only new stand-up material but some new music, as well.

“I feel better when I have the guitar on and I’m singing, for sure,” Adam told Howard on Wednesday’s Stern Show.

Long before becoming one of the biggest box office draws in Hollywood, Sandler earned himself a household name-status with his musical renditions on “Saturday Night Live” and on his original comedy albums, like 1996’s “What the Hell Happened to Me?” One track in particular off that album, “The Chanukah Song,” in which Sandler names other famous fellow Jewish celebrities, turned into an instant hit and even charted on the Billboard Hot 100.

“When I did the song, I would look up info and stuff to make sure everything was true,” Adam said of writing the song’s lyrics. 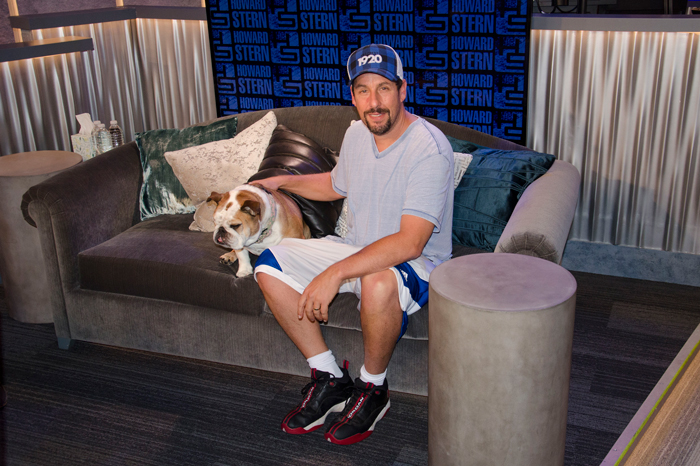 Adam Sandler on the Stern Show couch with his pet bulldog Photo: The Howard Stern Show

But there was one person who wasn’t pleased to be mentioned in “The Chanukah Song.” Sandler recalled once walking into a restaurant with his “SNL” co-star Rob Schneider and being approached by an older gentleman who asked him to “86 that song” since Adam famously sings, “the owner of the Seattle Super Sonic-ahs celebrates Chanukah.”

Adam told Howard that man continued, “You say that I’m a Jew. I’m not a Jew.” Sandler suspects he was speaking with the team’s new owner who, unlike the former owner, was not Jewish. That he would be offended to be confused as Jewish, though, didn’t sit well with Schneider who questioned the guy on the spot about being anti-Semitic.

“I never hated it. I was always told to be proud so that’s what I did,” Adam said of growing up Jewish, telling Howard the whole reason he wrote “The Chanukah Song” was because he was proud to be a Jew.

“Look how many great ones we’ve got,” he said with a laugh.

Bruce Springsteen, though not Jewish, also gets a shout-out in part two of “The Chanukah Song” and Adam told Howard he’s long been a fan of the Boss.

“I loved him and I grew up cranking his stuff in my house,” Sandler explained.

So when he spotted Springsteen working out at his gym several years ago, Adam admitted he was completely star-struck. Having just started at “Saturday Night Live,” Sandler wasn’t nearly as recognizable as he is now, but he didn’t want to miss his chance to meet the rock legend. When Adam walked up to him and began introducing himself, Bruce supposedly stopped him and said, “I know you. You’re Adam Stanley.”

When Adam told his “SNL” colleagues about his run-in with the Boss, no one believed him, until Springsteen appeared on the late-night series a short time later and attended one of the show’s pre-production meetings.

“He locks eyes with me, he goes, ‘You still working out at Bally’s?’” Adam told Howard.

Nowadays, Adam has the opportunity to meet plenty of A-listers, both professionally and in his personal life. While shooting an upcoming movie with Jennifer Aniston in Italy, the two were invited over for dinner at George Clooney’s house.

“He’s a great dude and him and his wife gave us a great night,” Sandler said of Clooney and his wife Amal. “We had fun. They made pizzas and we had a good time. And Bono was there.”

As a massive U2 fan, Adam confessed to Howard he had trouble playing it cool throughout dinner. “I acted very psychotic staring at him while he’s talking,” Sandler joked.

Both Jennifer Aniston and Bono got advanced copies of “100% Fresh” and told Sandler they loved the new special. Adam’s production deal with Netflix has now been upped to eight projects and Howard wondered if there’d be any more Stern Show cameos in some of Sandler’s future films – Gary Dell’Abate appeared in Adam’s flick “Sandy Wexler” and Ronnie “the Limo Driver” Mund had a small part in the movie “The Week Of.” Sal Governale also had a walk-on role alongside Adam in Kevin James’ sitcom “Kevin Can Wait.”

“You’ve been a great farm team for the Happy Madison crew,” Adam said of the Stern Show’s staff. And after Howard suggested Fred be in Adam’s next movie, Sandler suggested he’d be down for sharing the screen with Mr. Norris.