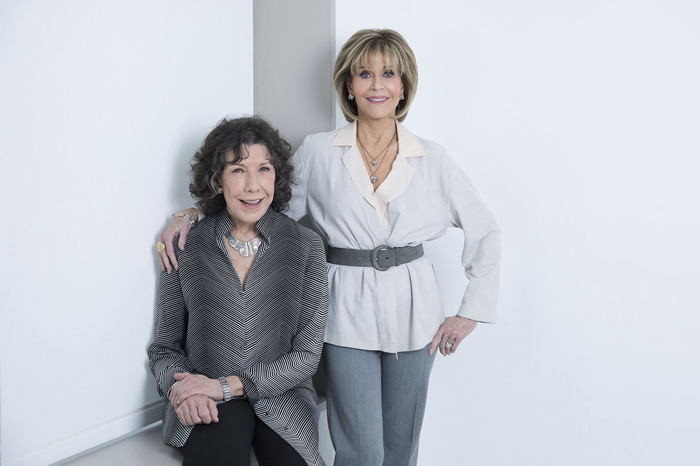 Not one but two Hollywood legends visited the Stern Show on Monday morning – Jane Fonda and Lily Tomlin. Their Netflix show “Grace and Frankie” is headed into its fourth season following Emmy nominations for both co-stars in 2017.

Before Howard talked to each of his guests about their iconic careers in show business, he wanted to start off by saying thank you to Jane for the stand she took while opposing the Vietnam War in the early ‘70s. As a young man at the time, eligible to be drafted and fight overseas, Howard has never forgotten how Jane came out against sending Americans to the battlefield to possibly die.

“Nobody cared like this woman cared,” Howard said of Fonda. “I thank you, from the bottom of my heart, for caring about me.”

It was Jane’s father, actor Henry Fonda, whom she credits for teaching her compassion. Howard also got a chance to talk to both actresses about their very different childhoods, their very different love lives, and why they still enjoy working together after so many years.

Check out all of the highlights from Jane Fonda and Lily Tomlin’s wide-ranging interview with Howard (below). 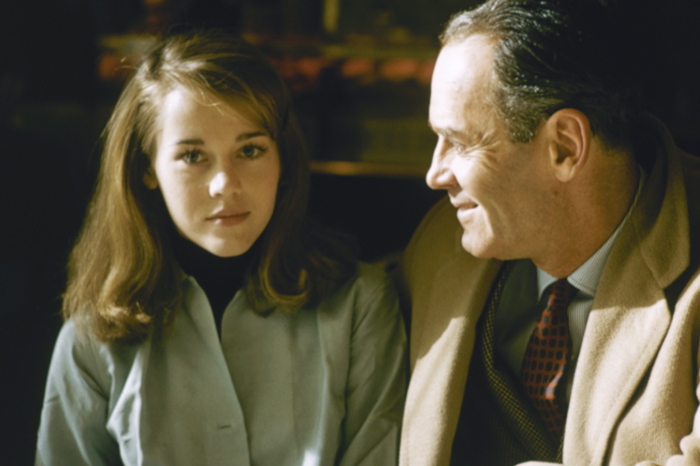 As the daughter of a Hollywood legend, Jane has never known a life outside of the public eye. Howard assumed the hardships Jane endured at an early age, including the death of her mother when she was just 12, would equate to her having a difficult childhood. That’s not the case, though, according to Jane.

“I could have lived in Syria. No, it wasn’t that bad,” Jane said.

While her family’s fame might have seemed burdensome at times throughout her youth, Jane now considers it more of a blessing, telling Howard it undoubtedly helped her launch her acting career.

“It’s easier to cut through the crowds,” she explained, saying it was easier to land an audition due to who her father was.

In a way, Lily’s father played a part in her start in show business, as well. She recalled growing up in Detroit and having her dad lift her up onto bars as a toddler so that she could sing and dance for drinking patrons. Her love of performing for a crowd carried into adulthood and she soon landed gigs at comedy clubs.

One of Lily’s first big breaks came while auditioning for the writers of “The Garry Moore Show.” They wanted her to do on-air celebrity impressions, but Lily couldn’t so she instead came up with an unusual talent she was sure would catch their attention.

“As I was walking out the door in abject humiliation, I turned around and I said, ‘If there was one thing I could do on television it would be my barefoot tap dance.’”

Since she invented it on the spot, Lily soon had to figure out how to take the taps off of a pair of shoes and tape them onto her barefoot. She also had to convince her agent that she was capable of doing such a routine.

“She is a real pioneer. She led the way,” Jane said of Lily and how she was able to break into the male-dominated world of comedy.

The Major Roles They’ve Turned Down 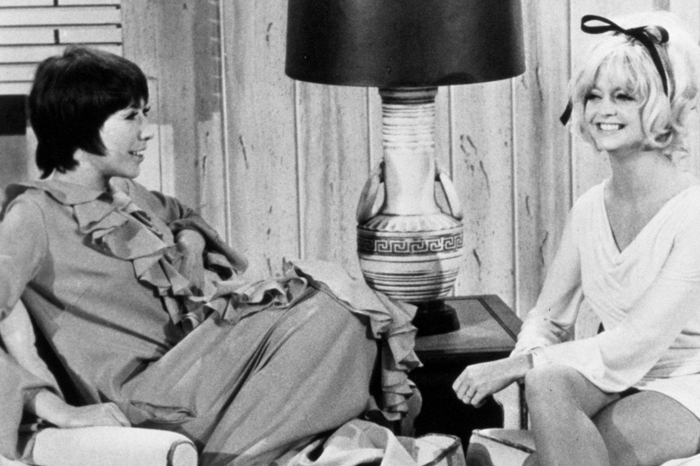 Both Jane and Lily became household names for the many parts they’ve played on TV and in film. Audiences fell in love with Lily and her many characters while she was a cast member on “Rowan & Martin’s Laugh-In,” but she initially turned down a spot on the hit NBC show.

“I thought ‘Laugh-In’ was square,” Tomlin admitted to Howard on Monday. Instead, she took a hosting job on ABC’s short-lived series “The Music Scene,” a gig she considered to be much cooler at the time considering the show had guests like Jimi Hendrix and Janis Joplin. The only problem, it didn’t have a lot of comedy. If she wanted to make people laugh, she’d do it on “Laugh-In.”

“I couldn’t have had such great luck with any other kind of show,” Lily said. Her characters Ernestine, Edith Ann, and Mrs. Judith Beasley quickly became fan favorites, making Lily a bona fide star.

Jane has won two Oscars and been nominated seven times but she told Howard how she nearly quit from the film that earned her her first Academy Award. The movie was “Klute,” in which Fonda plays a prostitute involved in high-profile murder case. In order to prepare for the role, Jane spent a week with real-life call girls, an experience that left her doubting whether or not she wanted to portray such a part.

“It was so sad because every one of them had kind of lost their chi, lost their soul,” Jane told Howard. She then went to director Alan Pakula and told him he’d have to find a new star. “I went to Alan and I said, ‘Alan, I don’t think I can do this. Replace me with Faye Dunaway.”

A few years before “Klute,” Dunaway starred alongside Warren Beatty in “Bonnie and Clyde,” a part Jane was also considered for. Though she couldn’t remember if she’d turned down the starring role in “Rosemary’s Baby,” Jane told Howard she probably did since she’s never liked horror movies. She also revealed she passed on starring in “The Exorcist.”

“I don’t like those kinds of movies,” Jane said. “There’s enough anxiety in the world.”

Lily surprised everyone when she admitted to turning down a part in 1978’s “California Suite” that actually wound up going to Jane Fonda – not even Jane was aware of that.

“Oh my God, I was the second choice? Okay,” Jane joked.

“I was offered that part first,” Lily explained. “I was a feminist. I didn’t want to go on the beach in a bikini.” 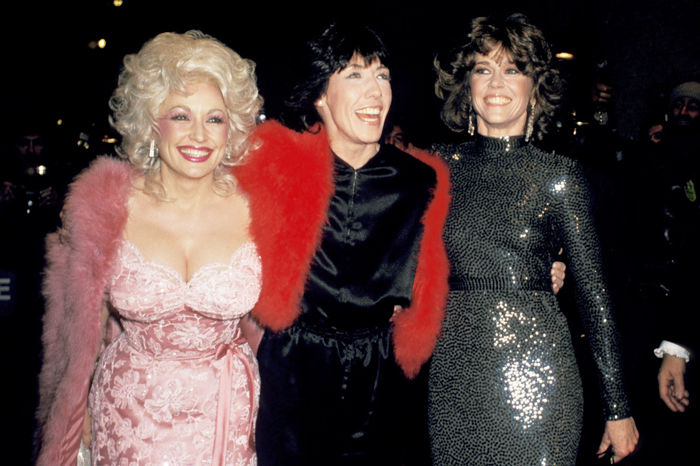 Long before they starred in “Grace and Frankie” together, Jane and Lily had moviegoers rolling with their 1980 film “9 to 5.” The idea to do a movie about secretaries in the workplace was Jane’s, and she both starred in and produced the film. She told Howard she was insistent on having Lily as her co-star after seeing her in “Appearing Nightly.”

“I said to myself, ‘I am not going to ever make a movie about secretaries unless she’s in it,’” Fonda recalled. She determined who her other co-star would be that night as well. “As I was driving home from the theater, I turned the radio on. It was Dolly Parton singing ‘Two Doors Down.’”

Lily and Dolly were both reluctant to sign on for “9 to 5,” but Jane eventually convinced them to play working women out for revenge against their boss. However, Lily was still second-guessing if she wanted to have a part in the movie after filming had already begun.

“Even after a week of shooting she said she wanted to be let out of her contract,” Jane said with a laugh.

“I didn’t think I was good,” Lily said, explaining the dailies she was seeing were for the animated parts of the movies before the animation had even been added.

“You can’t just be so worried, so concerned. You do have to take leaps of faith,” Jane said of taking risks with projects. 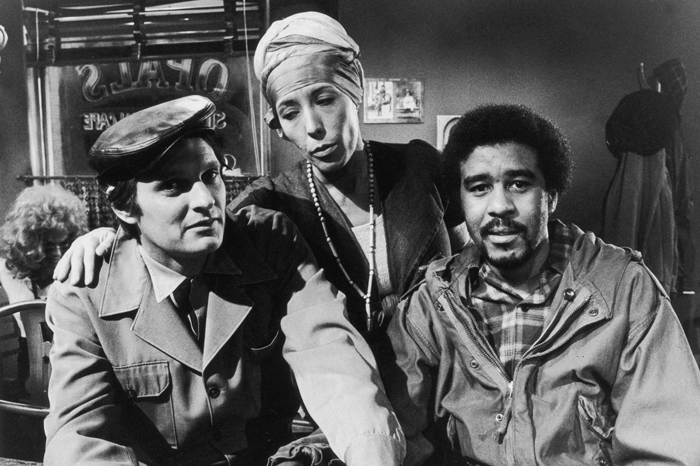 Jane’s father was an A-lister himself, but she told Howard there were hardly ever any stars over at their house. However, she did recall once skinny dipping as a teenager with actress Greta Garbo. Years later, Jane said she also skinny dipped with pop star Michael Jackson while she was shooting the movie “On Golden Pond.”

“I was ashamed to be seen naked. He didn’t seem to mind,” Jane said of Michael, adding that since they were swimming at night in the dark, she didn’t see anything. 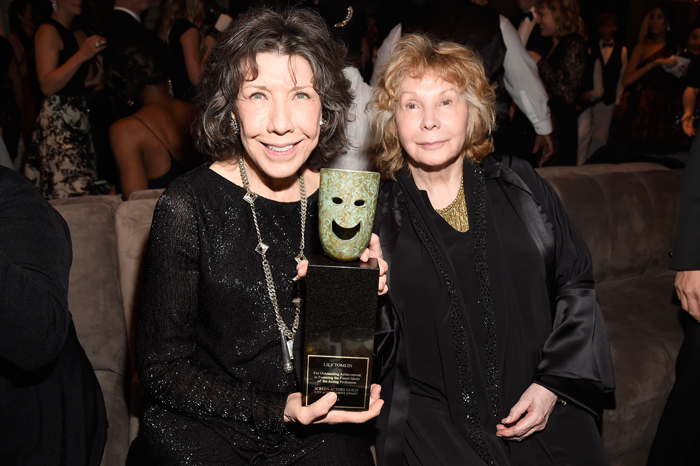 There’s another Jane in Lily Tomlin’s life aside from her TV co-star. She’s been with her wife Jane Wagner for 47 years now, with the two officially marrying in 2013. She can still recall meeting Jane for the first time and admitted to Howard it was love at first sight.

Ms. Fonda has been married three times before but will most likely not marry again — she stated on Monday that she was now done with dating forever. “I’ve been out of a relationship for a year and I’m very, very happy and I’m never going to date again,” Fonda said on air.

She remains close friends with ex-husband Ted Turner whom she divorced in 2001. Their marriage may not have worked out, but she explained they still both love each other. “If you fall in love with somebody to begin with, there’s a reason for it. So once you get over the anger, you get back to the reason for it. And Ted is a hoot … we love each other,” Jane told Howard. 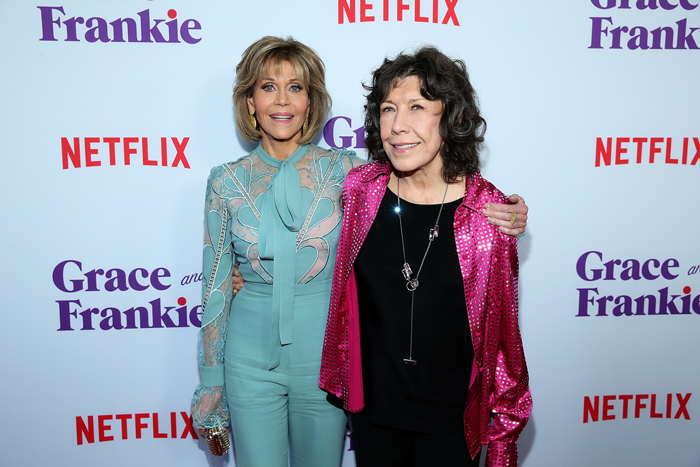 Staying in good health is important for both Jane and Lily, who are now 80 and 78 years old, respectively. Fonda helped to not only launch home workout tapes but home video itself with her wildly popular exercise tapes. She still stays physically fit though her workout routines are different these days.

“When you’re older, if you do it very gently and slowly on a regular basis, the aches and pains go away,” Jane said.

As for Lily, she tries to stay active but laughed when telling Howard about her regimen. “I don’t work out like I used to. I try to squat regularly,” Lily claimed

Howard asked if either ever partakes in marijuana. Jane admitted she smokes weed but only to help her sleep at night. “My doctor prescribed a vape thing — four hits, I’m out.”

Lily has smoked pot in the past but said she doesn’t do it any longer. “I had asthma and it makes my throat react,” she explained. 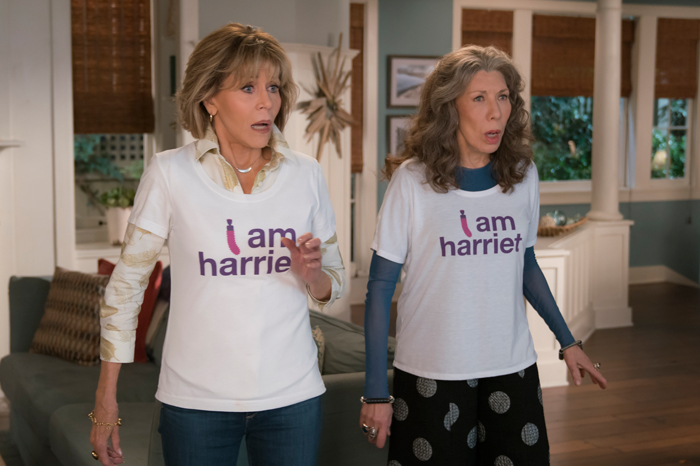 As friends both on and off the screen, Jane and Lily said they still love showing up each day to the set of their show “Grace and Frankie.”

“There’s something really nice about pulling through those Paramount gates every day,” Jane added.

While they love working together, their acting methods are just about as different as the two characters they play. Jane is known for her script memorization skills, but Lily admitted she plays thigs a bit more “spontaneous.”

Jane told Howard her co-star might require an extra retake or two every so often but the results are worth the extra shooting time.

“We crack each other up and we can’t stop laughing,” Jane said of their on-set chemistry.

Robin Settles on a Sophisticated Gift for Howard’s Birthday