Plus, watch an exclusive clip from Ike’s new movie “The Oath”

Ike Barinholtz hasn’t spoken much about the serious injury that nearly left him paralyzed but on Monday’s Stern Show, he detailed what went wrong while shooting a scene for his movie “Blockers.” Ike plays the protective father of a teenage girl who hopes to lose her virginity on prom night. The original script had Ike being thrown off a hotel balcony after showing up and trying to stop his daughter from having sex. It was one of the last scenes to be filmed and Ike arrived to the set willing to participate in the stunt.

“You want to be like a team player and just, like, finish the movie,” Ike told Howard. After watching playback of how his stunt double did the fall, Ike was shown the area where he needed to land for his take, which he described as being similar to a gym mat.

“I get pushed, I fall off, I land, and I started screaming,” he told Howard. “I can’t move, everything’s like frozen, and I’m screaming.”

Specifically, Ike said he still remembers he couldn’t move his toes. He knew his injury had to be serious since several crew members began praying in front of him, hoping he’d be okay. Once at the hospital, doctors told Ike he’d fractured his sixth and seventh vertebrae. A specialist later told him had the break occurred just an inch over from where it was, Ike’s injury would have been the same as the one actor Christopher Reeve sustained after falling off a horse, paralyzing him from the neck down.

Recovery took time, determination, and hard work from Ike. He described for Howard how he he’d strap into a large plastic brace every day in order to walk up and down his street for up to 10 miles. As for how he managed the pain, Ike said he stayed away from any prescribed medication. “I didn’t take one Vicodin … just weed,” he told Howard.

“Blockers” wound up being a big hit at the box office, something Ike is particularly thankful for. “If it like was a huge bomb and I almost died, it would be embarrassing,” he said with a laugh. 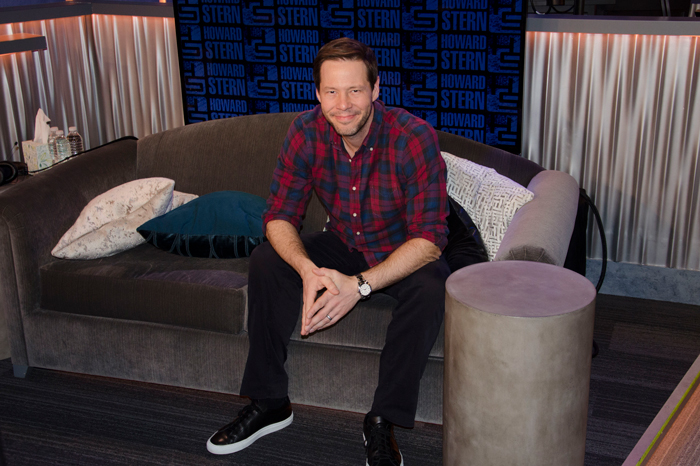 The broken neck isn’t the only health scare Ike told Howard about, either. He also had a vasectomy recently that left him with some unexpected side effects. Three days after getting the procedure done, Ike said he discovered his penis had completely changed colors.

“I went to go pee and my man, my dick was purple,” Ike told Howard. “And like when I say purple … you know Grimace from McDonald’s? If he had a dick, it would look like that.”

Understandably troubled by what he saw, Ike decided to send a picture of his penis to his wife to see if she thought he needed to get immediate medical attention. However, she told him sending her photos like that probably isn’t a good idea, especially while she’s at her office where she works as a certified public accountant.

As one of the most diehard Stern Show celebrity superfans, Ike wanted to talk to Howard about Tan Mom and her recent live performance of her song “Free 2 Be Me.” He also told Howard how sad he was to learn Evil David Letterman died in July. Ike considered Evil Dave to be in the top three of his favorite Wack Packers and he shared one of his fondest memories of when a caller once criticized Dave and the jokes he used to ad lib while on the air with Howard. Evil Dave simply explained, “I’m under the weather, sir,” something Ike said he now blurts out whenever he makes a bad pitch.

For his new flick “The Oath,” Ike not only writes and stars in the movie, he’s also making his directorial debut with the film. He told Howard he got the idea for “The Oath” — about a family at odds after the U.S. president orders every American citizen to sign a loyalty oath — after his own relatives got into an argument following the 2016 election.

“The mood of the country is so angry and divided,” Ike told Howard, though he made it clear his movie doesn’t strictly skewer just one side of the political spectrum. “It’s funny and it’s violent and it savages everyone.”

Check out an exclusive clip from “The Oath” (below).