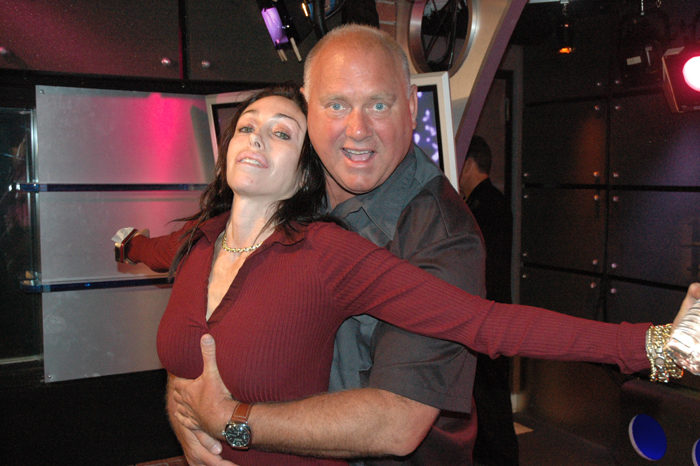 Heidi Fleiss and Dennis Hof on the Stern Show in 2005 Photo: The Howard Stern Show

Dennis Hof, the owner of multiple brothels including Nevada’s famed Moonlite Bunny Ranch, died on Tuesday. The self-proclaimed “Pimp Master General” passed away just hours after celebrating his 72nd birthday with several of his famous friends — former madam Heidi Fleiss (seen above), political advocate Grover Norquist, and adult film star Ron Jeremy were all in attendance at the party with reports of Jeremy being the one to find Hof unresponsive in his bed in the morning.

On Wednesday’s Stern Show both Howard and Robin remembered Dennis and the several visits he made to the studio throughout the years.

“Dennis was always willing to help out the less fortunate,” Howard said, recalling how Hof once offered free visits to his brothel for armed service members returning home from the Iraq War. Dennis also allowed Wack Packer Eric the Actor to finally lose his virginity at the Bunny Ranch in 2008. “I don’t think I ever heard Eric so upbeat,” Howard said. Hear audio from Eric’s memorable trip (below).

During Hof’s first appearance on the Stern Show in 2000, he told Howard he majored in business in college, something that came in handy as he built his unique empire. But perhaps Dennis’s most unforgettable in-studio visit occurred in 2013 for the Get My Grandpa Laid contest where three elderly men competed for a chance to spend a romantic evening with one of the girls Dennis brought with him that day. Each gentleman shared personal stories for why they deserved to take the once-in-a-lifetime trip and things got so emotional, Robin recalled shedding a tear that morning.

“I wound up crying during that contest,” she said on Wednesday.

While there was only one official winner of the competition, Hof decided to let all three grandpas come out west for a night with one of his ladies. It was just one of many kind gestures he made during his time on earth.

VIDEO: Gary Dell’Abate Felt Uncomfortable at Dinner With Ronnie Mund but Will They Get Along at the Upcoming Jazz Club Outing?