“You’ve got to be a little more heavy-handed,” the veteran radio host says 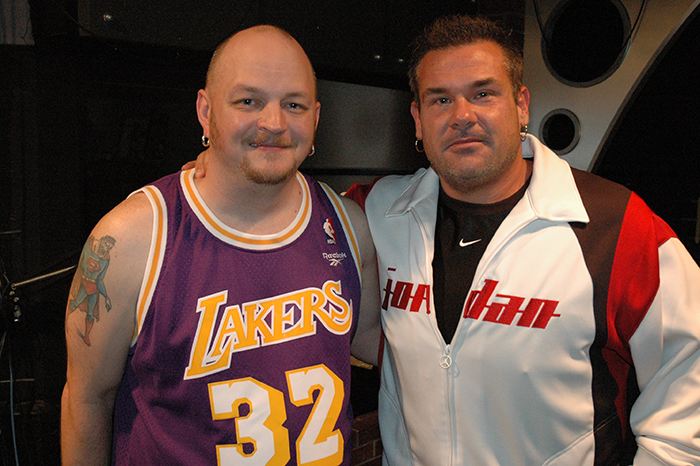 Brent Hatley and Bubba the Love Sponge in 2005 Photo: The Howard Stern Show

After hearing Benjy Bronk take a jab at Howard on the air Wednesday morning, Bubba the Love Sponge called in to tell the King of All Media he needs to crack down on his staff and give them more discipline.

“You’ve got to be a little more heavy-handed,” the veteran radio host told Howard.

Bubba is no stranger to creative punishments as Brent Hatley, who used to work for him, attested.

Brent recalled one particularly brutal sentence he received after making a mistake in preparing Bubba’s guest notes. “The next day I had to swim across this lake that we had out back and he stood up on a stand with a high-powered paintball gun with frozen paintballs in it,” he said. “I had welts. I even got hit at the top of my eye.”

While the experience did not seem pleasant, there was one upside. “I’ve got to thank Bubba. When I hired Brent, he was fully housebroken,” Howard joked. “Seriously Brent, you’re like the most delightful employee and guy to work with.”

Other punishments Bubba’s staffers endured over the years have involved an in-studio “torture rack,” fire ants on the testicles, a Tony Soprano-style wiffle bat beating, and a shed of horrors the staff equated to the movie “Saw.”

“I love Brent like my brother, but … you gotta sometimes break a guy down, even a Marine,” Bubba told Howard.