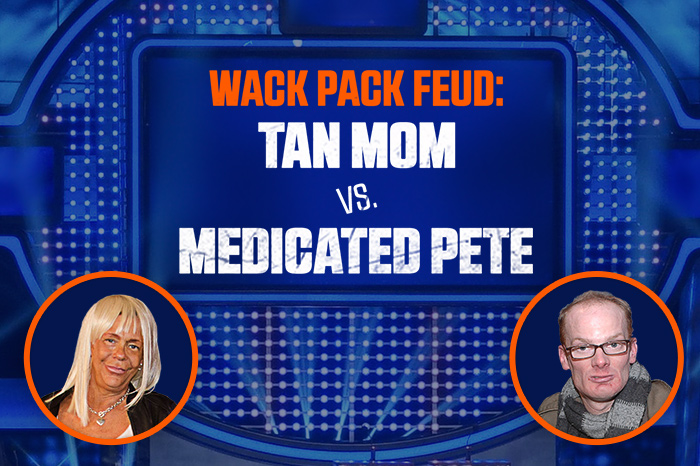 Holidays are all about family, Howard explained Monday morning, so what better way to kickoff Christmas Week and the upcoming holiday season than with Wack Pack Feud?

Two teams entered the studio to compete for a $1,000 prize: Tan Mom’s “family,” including her husband Richard, her “Free 2 Be Me” collaborator Adam Barta, and Patricia Marie herself, as well as Medicated Pete’s “family,” consisting of the Stern Show intern-turned-Wack Packer, his mother, and his friend and fellow Wack Packer Asian Pete. 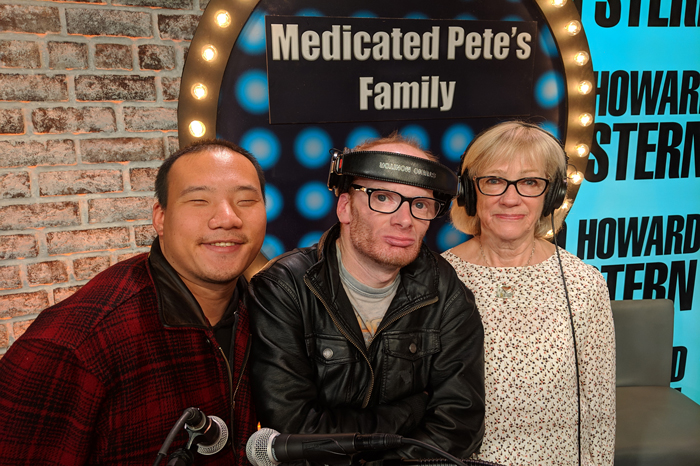 Howard spoke to the contestants before the competition got underway. He was especially interested in talking to Medicated Pete’s mom and Tan Mom’s husband, two first-time guests with a unique perspective about the lives of the celebrated Wack Packers.

“He makes us laugh. He’s very funny,” she revealed, adding “Well, he doesn’t know he’s funny, that’s the thing, but we laugh all day long with Pete.”

Their teammate Asian Pete surprised everyone with the news he currently had a girlfriend. The Wack Packer and longtime virgin said he’s dating a 30-year-old woman with a job, and that and she’s his best friend. The two aren’t having intercourse yet, however—he told Howard he simply didn’t have the time and was still saving up money.

“Is she really a girlfriend, or a prostitute?” Robin Quivers wondered.

Asian Pete laughed at the notion. “I will buy a house first before I do anything,” he said.

Medicated Pete, on the other hand, isn’t seeing anyone. He said he was frustrated by his inability to meet women, so Howard and Asian Pete tried coaching him at one point with some roleplaying in which Asian Pete illustrated how he might chat up a woman at a bar. While Medicated Pete’s love life has been quiet, he did have some career updates for Howard—he said he’s working on a video game and is considering partnering up with Adam Barta to release a song of his own. 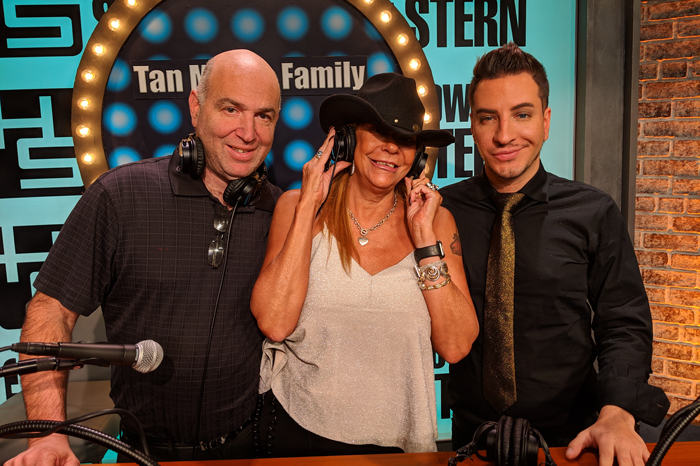 Turning his attention to Tan Mom, Howard was curious how she and her family were handling the success of her massively popular new music video “Free 2 Be Me.” Tan Mom said she hadn’t yet seen a dime from it, though Adam revealed she might soon have a sponsorship opportunity in the works with the cyber-security company featured in the video.

Tan Mom also addressed the controversy surrounding Adam’s extended screen time in the video, revealing she and Adam are on good terms now. “I got a little upset that Adam was more in it, but to get to the bottom line he’s the one that sings and I don’t. So, I don’t feel any disclosure anymore when he gets bubbled up in his head, you know?” Tan Mom told Howard. “Just once in a while everybody gets a little annoyed about something, but he’s my friend.”

But her feelings were a little more complicated when it came to her other Wack Pack Feud partner—her husband Richard. He and Tan Mom had an emotionally wrought on-air conversation touching upon a variety of subjects, including gambling, lying, making chicken soup, and even Stern Show staffer Sal Governale.

To Howard it looked like Richard was quite the catch, but Tan Mom said looks can be deceiving. “What you see is not is not exactly what you see,” she tried explaining to Howard.

Thankfully, the couple put aside their differences to give Wack Pack Feud their best shot. “The families aren’t supposed to be feuding with each other, they’re supposed to feud with the other families,” Howard joked.

Here’s how the game unfolded…

Tan Mom faced off against Medicated Pete’s mother to start the first round of the Christmas-themed Wack Pack Feud. Whoever offered up the best guess would have the opportunity to take control of the board for their team, or pass.

“Ladies, we surveyed 100 people with the following question and the top five answers are on the board,” Howard began. “Name something a person could do to land on the naughty list.”

Tan Mom buzzed in first with a quick response.

That answer was nowhere to be found on the board.

Medicated Pete’s mom had better luck with her answer of “steal,” and her team took control of the round. Asian Pete guessed next. His answer was both hard to hear and wrong. Medicated Pete got the next one right with “cheating,” but missed two in a row after that giving Tan Mom’s team the chance to steal the round.

It was the number one answer and her team won the round, scoring 72 points in the process.

Tan Mom’s husband Richard went toe-to-toe with Medicated Pete to begin the next round.

“Name something you do in the snow,” Howard asked them.

Medicated Pete rang in first with “build a snowman”—a correct answer and the second most popular of five.

Richard’s answer “sled” was also correct though a little lower on the board, so Medicated Pete’s family took control of the round. His mom guessed “snowball fight,” the top answer. Asian Pete followed with “shoveling the show,” on the board at no. 4. With one answer remaining, the team had three chances to win the round. But would it be enough? Medicated Pete guessed “drinking hot chocolate” and his mom guessed “skiing,” both were wrong.

Asian Pete offered up his team’s final guess with “snow angel,” and to everyone’s surprise … it was correct. His team won the round.

“We’ve just seen a Christmas Miracle,” Howard said, adding the Medicated Pete family was now in the lead with 88 points. But it would all come down to the final round.

Asian Pete and Adam Barta squared off to start the third and final round.

“Top four answers on the board—name one thing you should never ever do at the office Christmas party,” Howard said.

Adam buzzed in with the top answer: “get drunk.” His team chose to play, which meant Tan Mom was up next. She guessed “cheating,” sticking with her theme for the day. She heard the “ding” of a correct answer but was confused by what it meant.

“Yup, the number two answer. ‘Don’t hook up with a co-worker.’ The judges gave it to you,” Howard responded.

Her husband Richard went next. “I would say, ‘tell off the boss,’” he guessed correctly. Only one answer remained.

Adam guessed incorrectly with “talk religion or politics,” followed by Tan Mom missing the mark with “exchange numbers.” That left Richard with his team’s final guess and a chance to win the game.

“Um, eat like a pig,” Richard guessed. He was incorrect.

“Uh oh, this is coming right down to the wire,” Howard said.

Medicated Pete’s team now had the chance to steal the round and win the whole game. “Talk about work,” he guessed.

The remaining answer was “flash your coworkers” and since no one guessed it correctly the points went back to Tan Mom’s team. With a final score of 168 to 88, her team wound up winning Wack Pack Feud and the $1,000 prize.

“This was awesome … This was fun,” Tan Mom said, revealing she even feels a little closer to her husband after competing alongside him in the game. “Who cares about winning and losing? We all won today.”

“Can we share the prize with Medicated Pete’s family?” Adam asked. “I feel like it’s Christmas, we should all be winners.”

As it turned out, Adam’s gesture of good will was unnecessary—Medicated Pete’s team received a consolation prize of $500.

The Wack Packers and their respective families said their goodbyes after the game. “I just want to say happy holidays to everybody and that I love you all,” Tan Mom told everyone.

Medicated Pete’s goodbye took a bit longer, as it sometimes does. He and Howard went back and forth several times before the segment finally came to a close.