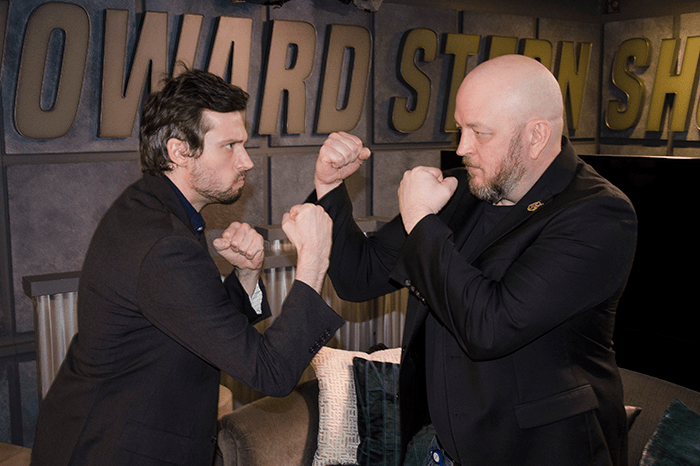 Bets have been placed and taunts continue to be exchanged, but on Wednesday Howard revealed the wait is nearly over to see whether Brent Hatley or Memet Walker had the higher I.Q. After agreeing on a set of terms, the two Stern Show staffers officially took their tests last week. Based on the seemingly different responses of Brent and Memet after the test, though, their co-workers have strong thoughts about who will come out on top.

By all accounts, Brent emerged from his I.Q. test confident in his performance. “There was two parts I felt that I crushed — two parts of the test. And there’s ten total. But I don’t think that I tanked any part of it,” he told Howard.

Memet, alternatively, has been downplaying his soon-to-be-revealed score, according to other staffers.

“I didn’t say I did horribly. I just said I did worse than I expected to do,” Memet clarified in contrast. And despite initiating the challenge, he also argued that “smart people don’t go around bragging that they do great on I.Q. tests.”

Furthermore, Memet accused the test administrator of “shenanigans” in complimenting Brent on his performance in between sections. Jason Kaplan was quick to shoot this notion down, explaining the great pains which were taken to make the tests equal — not only with each other, but with the staff I.Q. testing from 2010.

Dr. Sitt, who did the original round of tests, returned for the task once again. While the actual I.Q. test has moved on to its sixth edition, he dug up the fourth edition which the rest of the staff took for both Brent and Memet.

As for the compliment complaint, “Jason pointed out to me that with all of us, [Dr. Sitt] told us when we did very well at certain parts,” Gary Dell’Abate explained.

Jason also had the details on one more piece of information to sway the predictions. “I heard before they took the I.Q. test, they both went online and took an online test — 10 questions. I heard Brent got 10 out of 10 and I heard Memet quit halfway through,” he revealed.

While true, Memet quickly clarified that he simply didn’t want Brent to have any information on him going into the official test.

Not everything may be as it seems, though, according to Will Murray — holder of the highest I.Q. on staff to date — who told his co-workers “no one walks out of that test feeling like they did a good job.”

All things considered, quite a few staffers placed bets on Brent beating Memet, including Howard. “I think Brent is going to crush it. I think Brent’s a really smart guy,” he noted.

Benjy Bronk, conversely, was willing to take the underdog and accepted Howard’s bet. Ronnie “the Limo Driver” Mund also chimed in, telling Howard he thought Memet was simply playing head games and has the test in the bag.

Fred Norris, alternatively, gave a prediction that confused everyone. “I thought it was going to be a dead heat, 125-125,” he said. “However, there’s a plus or minus here. I think Brent is supremely confident. I think he’ll actually go better. I think Memet will do worse. It could be 120-130 in favor of Brent,” he further explicated.

Among other wagers, JD Harmeyer was of the opinion that the gap between the two scores would be less than five points and took on challengers in both Gary and Benjy.

And while he claimed no responsibility for anyone’s bets, Brent himself predicted he would score “somewhere in the range of Jason, Jon Hein, Gary … probably low 120s.”

Tune in to Howard 100 on Tuesday, March 6 to hear who receives the higher I.Q. test score.