Had she not landed her starring role on NBC’s top show “This Is Us,” Mandy Moore told Howard she might have given up acting for good. While making her Stern Show debut on Wednesday, Mandy opened up about a lull in her career that forced her to consider returning to her roots in music.

“I just didn’t know. I was like, ‘Maybe this acting isn’t for me,’” Mandy explained. She’d been trying to find a steady gig on a network TV show for a few years but none of the series ever lasted all that long with some not making it to air at all. Moore switched agencies around that time and she and her new team decided to focus their efforts on finding her a role on a streaming network series. So when Mandy was sent the pilot script for “This Is Us,” she was confused why she was being asked to read for another traditional network show.

“I read this script sort of reluctantly and, of course, my jaw’s on the floor. The script knocked me out,” she told Howard.

One read was all it took for Mandy to decide she wanted the part of Rebecca Pearson, but first she’d have to go through a series of auditions. After her initial tryout, Mandy was told the show’s casting directors liked her but that they were going to New York to audition other actresses for the part. Six weeks later, she was told it was down to her and two others and it would depend upon a “chemistry read” for who would win the role.

That’s when Mandy and Milo Ventimiglia were teamed up to read for the two leads. Not only did producers sense something special between them, Mandy said she felt a rapport with Milo immediately as well. “Him and I, it was instant, it was easy, it was effortless,” she told Howard. 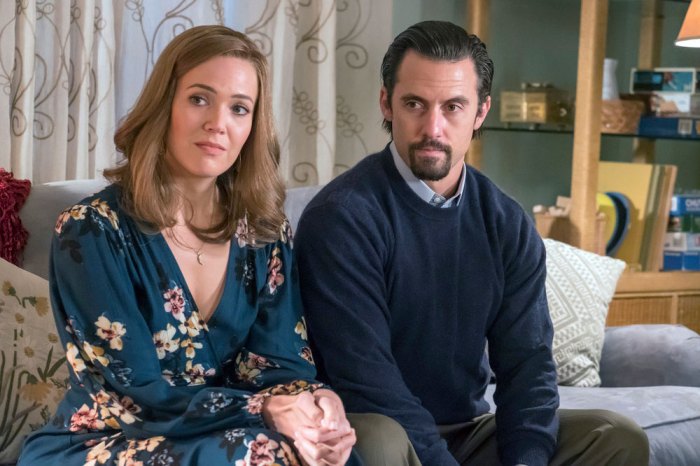 With its third season starting up again in the fall, “This Is Us” has become a hit with both fans and critics alike. Howard asked Mandy if she had any hopes of winning an Emmy, a fair question since many of her co-stars were nominated last year with Sterling K. Brown winning the award for Outstanding Lead Actor in a Drama Series.

“I would never win. There’s no way,” Mandy said with a laugh. Moore said her category is especially competitive, with so many strong leading female contenders battling it out. A nomination would be nice but Mandy told Howard she’s just happy to have the job she has.

No matter who in the cast scores an Emmy nod, Mandy knows for sure they’re all scoring similar paychecks. “I know that I make as much as the men on the show,” she revealed.

As a fan of the show himself, Howard wondered if the “This Is Us” writers had any plans for how the series would end and just how much longer the show would stay on the air.

“Some of the series finale has already been shot,” Mandy said, adding that she’s heard producers are only planning to keep the show around for “five or six seasons and that’s it.”

Long before Mandy Moore was known to millions as a TV star, she became a household name as a teenage pop star with her 1999 debut album “So Real,” featuring her hit song “Candy.” The single’s lyrics still confuse Mandy to this day. “What does it mean to ‘miss someone like candy’? What the fuck does that mean, seriously?” Mandy asked with a laugh.

Songs like that were selected for Mandy by her record label with little to no input from her. “I have a weird relationship with it. It doesn’t feel like me,” she told Howard. “I’m appreciative for the opportunity because it’s why I’m able to sit here today but I don’t think it’s a reflection of who I am.” 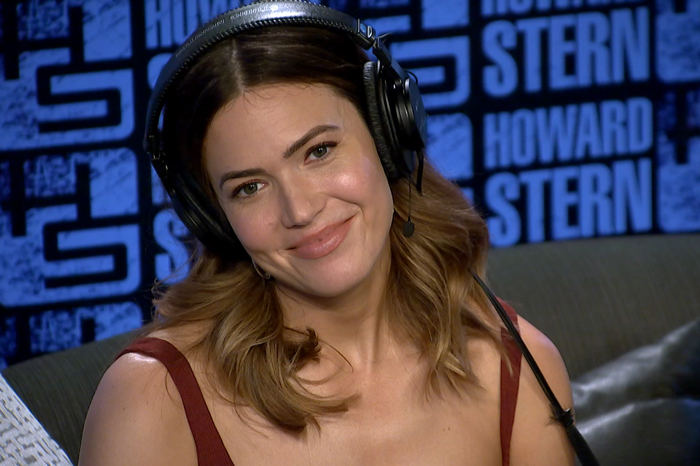 But once her music became a commercial success, Mandy found herself opening for pop powerhouses like the Backstreet Boys and ‘Nsync. She recalled the time she ran into Justin Timberlake backstage at one of their concerts and he remarked how large her feet were. At the time, Mandy admitted it was a bit embarrassing, especially considering she had a small crush on Timberlake. She’s since forgiven him for the comment and laughed about it on Wednesday morning.

“He’s apologized since, though. He’s such a lovely guy,” Mandy told Howard. “I was like, Justin, sir, you just played the Super Bowl. I’m fine.”

The term spawned a song they’d all sing while out on tour and later, in a bonding moment for everyone, a matching group tattoo of a tiny sperm that even Mandy got inked on her foot. “To commemorate the tour we all got babies on our feet,” she explained.

Aside from her bandmates, Mandy told Howard she also bonded with her mom while touring. She thinks the time the two of them spent together while out on the road caused them to become close during a period in her life that most teenage girls push their mothers away. They still remain close but Mandy discussed an unexpected moment in their relationship: when her mother left her father for another woman.

Her parents divorcing was never something Mandy ever considered happening and certainly not under those circumstances. During a family Christmas vacation one year, Mandy was setting up the laptop she’d bought her mom when she stumbled upon an email with her name in it. It was a letter her mother had written to Mandy and her two brothers telling them about her decision to leave their dad.

“I was petrified,” Mandy said. “I slammed the laptop closed.”

At first, Mandy admitted she was slightly dubious about whether or not to trust her mom’s new partner, a woman her mom met playing tennis. But being in a same-sex relationship is not uncharted territory in the Moore household — both of Mandy’s brothers are gay and came out before their mom’s announcement.

As painful as the split may have been, Mandy told Howard everything worked out in the end. Her mom moved across the country to Arizona to start a new life with the woman she’s still married to. Her dad is also happily remarried.

Howard also discussed some of Mandy’s previous romances, including with actor Wilmer Valderrama. In 2006, Valderrama appeared on the Stern Show and made headlines for announcing he was the one who took Mandy’s virginity. On Wednesday morning, though, Mandy told Howard there was no truth to Wilmer’s story.

“Not only was it a fib but it was so unlike him. It was so uncharacteristic,” Mandy said.

Enough time has passed that she’s put Wilmer’s words behind her, but she admitted she was none too pleased hearing his interview that day. “I love him and I still love him and he’s a very good friend and that’s why I was so shocked by it.”

Other famous dudes Mandy has had on her arm include “Scrubs” star Zach Braff, tennis champion Andy Roddick, and musician Ryan Adams whom Moore married in 2009 and divorced in 2016.

“I just chose the wrong person,” Mandy said of Adams.

While still parting ways with one rock star, Mandy struck up a relationship with a different rock star — Dawes frontman Taylor Goldsmith. Mandy had posted a picture of Dawes’s album cover on her Instagram and captioned how she was a fan of the band. Taylor saw her post and had his manager contact Mandy’s manager to ask if she’d ever want to come to one of their shows. Before long, the two were talking directly to one another.

“I was in the middle of this very tumultuous divorce and I was not looking for romance and especially not looking for a musician,” Mandy told Howard. She agreed to go out on a date with Taylor at a small L.A. sushi restaurant. The next day, however, Taylor left to go out on tour for six weeks which meant they could only email and text during his time away.

“I started to absolutely fall in love with him just by communicating which was the best,” Mandy said, explaining the distance and the inability for the relationship to become physical at first made it even more romantic between them.

Late last year, the couple became engaged and Mandy told Howard she’s ready and looking forward to having children with Goldsmith and becoming a mom.

And while she’s certainly no longer considering quitting acting, it turns out Mandy may soon return to her roots in music after all — she hopes to record a new album with her soon-to-be husband.

“Taylor and I are planning it now,” Mandy said.

Watch Mandy Moore on “This Is Us” when Season 3 returns to NBC in the fall.