He’s always been one of the funniest performers in show business, but on Wednesday’s Stern Show David Spade proved he might also be one of the hardest working ones. In addition to regular stand-up spots, David’s new audiobook “A Polaroid Guy in a Snapchat World” comes out on Thursday ahead of his new Netflix movie “Father of the Year” debuting Friday.

Spade’s longtime friend and former “Saturday Night Live” co-star Adam Sandler is producing the film, so the laughs are all but guaranteed. Something audiences might be surprised to see in the new flick, though, is a totally nude David Spade.

“I’m naked in the back of a truck,” David told Howard, revealing that is indeed his butt that you see in the movie’s trailer. It’s not until David’s character gets launched out of the pickup that he had to be replaced by a stunt double.

Howard applauded David on not shying away from showing some skin. “I’m not in that bad of shape,” David told him. “I get a couple bad Yelp reviews on my ass but overall it’s not too bad.”

As for full frontal nudity, David doesn’t think he’ll ever show that much of himself on film. Spade is so protective of his privates, he told Howard he’s never once sent a girl a “dick pic.” 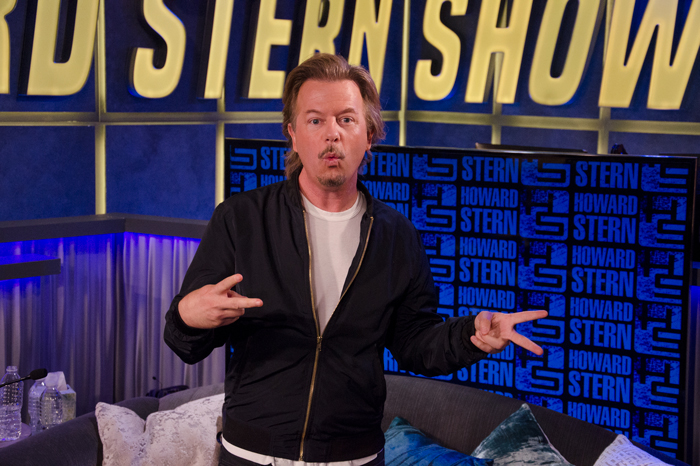 Though if Heather Locklear is to be believed, David has nothing to be ashamed of. She famously told reporters in 2017 one of the reasons she dated Spade was the size of his manhood, but David told Howard she might have just been making that up.

“She’s always so sweet and so nice,” David said of Locklear. “I owe her for life.”

David and Heather have stayed in touch since breaking up several years ago, and she’s not the only ex Spade has remained friends with. “I don’t think I have bad blood with anyone that I dated.”

Considering he knows a thing or two about being in a high-profile romance, Howard wanted to get Spade’s take on “SNL” star Pete Davidson getting engaged to Ariana Grande after only dating for a brief period of time.

“Engaged is the new second base,” Spade joked.

Davidson and Grande have also inked themselves with several matching tattoos since starting their relationship earlier this year.

David knows Pete after working with him on last year’s “Roast of Rob Lowe” and praised Pete’s comedy chops. He also warned him about playing his cards right with Grande if he hopes to avoid having her fervent fans criticize him on social media. “If he makes one wrong move … if they come after you, it’s terrifying,” Spade said.

That said, Spade gave Pete and Ariana his blessing. Howard asked if David was in Pete’s shoes and dating Ariana Grande what he would do.

There may not be a pop star on David’s arm but there is a Ferrari in his driveway, not that you’ll ever see him cruising around town in it. Spade purchased the pricey sportscar for his 50th birthday, but he told Howard as soon as he got it home he no longer wanted to be seen in it.

“I realized I couldn’t drive it anywhere. I didn’t even tell Sandler. I didn’t tell anyone,” Spade said with a laugh, telling Howard he felt like a “douche” driving it.

“Basically sitting in it is like laying on a lawn chair,” David continued. “You’re like leaning back and you’re one inch off the ground and I go, ‘I look like a fucking moron.’”

Listen to David Spade’s new audiobook “A Polaroid Guy in a Snapchat World” available Thursday, watch him in “Father of the Year” out on Netflix Friday, and see him live at The Stephen Talkhouse for an evening benefiting North Shore Animal League on Aug. 18.