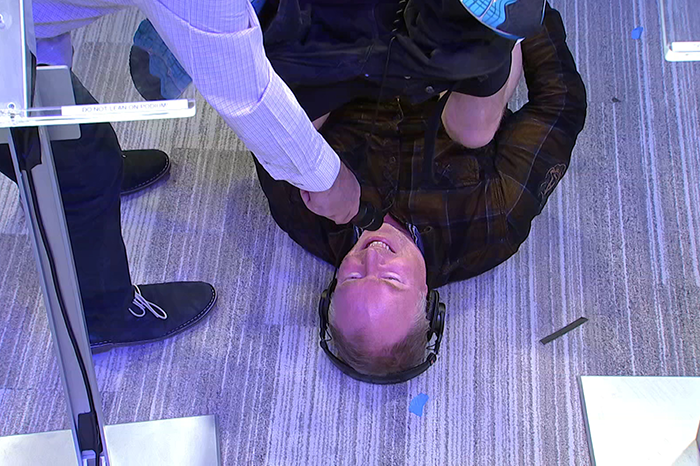 Tuesday morning began with a bang when Robin Quivers informed Howard she had been taught a new term: gaping.

“Gaping is a bunch of guys doing something to a girl and then seeing how big her ass is,” Robin said.

Executive Producer Gary Dell’Abate interjected, though, saying fellow staffer Sal Governale was in the back office describing gaping as something much different than Robin’s understanding of the term.

Richard Christy, of course, wanted to come in studio to demonstrate his “gaping” technique so there would be no further confusion. But after dropping trou and getting in position, Robin remained unimpressed.

“Oh, that’s ridiculous,” she remarked. “Because he’s got the extra skin, he doesn’t gape very wide.”

Howard suggested the video of Richard’s gaping exhibition could serve as the basis for Memet Walker’s next Super Bowl commercial script, but the Stern Show staffer informed everyone he had already reworked his idea after hearing yesterday’s feedback.

.@memetwalker presented his concept for a #SuperBowl commercial featuring @HowardStern and insisted it would be a hit … even if certain parts would need to be pixelated.Watch more #SternShow videos in the #Howard section of the @SIRIUSXM app: https://t.co/CE8OiCDto1 pic.twitter.com/O2AwU0jLLA

Sticking with the concept of spoofing an old Apple ad, Memet set the scene. “So, you’re running in slow-motion with these tiny running shorts—but your running shorts are so tiny that your ball pops out while you’re running. But again, it’s pixelated,” he described for Howard. “And then the tagline is … ‘Comedy has balls again.'”

Needless to say, his pitch needs to be further refined.