In honor of the 10th anniversary of Robin Quivers ordering an $800 bottle of wine while out to dinner with her co-workers (above), Howard announced she would be competing against Stern Show staffer Richard Christy in an “Ass vs. Mouth” taste test on Tuesday to determine whether Richard’s butt or Robin’s mouth had the more astute palate.

But it quickly became apparent that despite weeks of planning and a set rehearsal, Robin was not onboard with the plan to blindly taste the three bottles ranging in price from $8 to $800. “I never signed on to that because that’s ridiculous,” she immediately protested.

The #AssVsMouth Wine Taste Test with @cwotd is set for Tuesday’s #SternShow, but @rqui had a few issues with how it was put together by @Siriusjay. Tune in on #Howard100 to hear how it all shakes out! 🍷 pic.twitter.com/WhuHXktmv2

The Stern Show co-host maintained she only agreed to compete against Richard in a test of white and red wines, not the various price points. “I knew you guys would start pulling this kind of crap where you’re going to try to determine that Richard’s ass is a better sommelier than my mouth,” she said.

While Jason Kaplan remembered their conversations differently, he offered to take full blame and wondered if she would still be willing to make an educated guess in tomorrow’s contest.

Robin still seemed deterred, though. “Again, you can have a very fine bottle of cheap wine. It is all in how the wine is manufactured,” she argued.

Richard figured his opponent had simply gotten cold feet, which made him even more confident. “I think I’ll be able to tell the differences. I have, like, taste buds in my ass,” he described.

In fact, Richard even offered to double up and taste all the red wines as well as the white variety for Robin. “You can put anything in my asshole,” he offered. 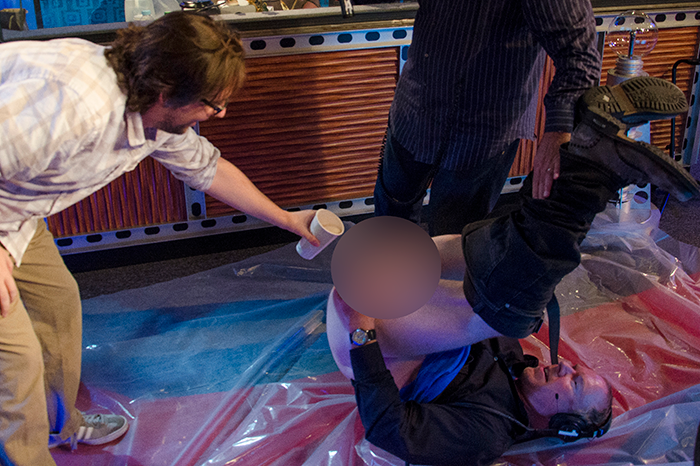 With Robin’s participation in question, there was still one person willing to step in to battle Richard. “I’ll go up against your asshole any time,” Howard said with a laugh.

Tune in Tuesday on Howard 100 to see if Richard, aided by dedicated “sommeli-ass” JD Harmeyer, can beat any takers in the “Ass vs. Mouth Wine Taste Test.”