“My job now is to be the face of I.B.M.,” the rock legend says of dealing with the progressive muscle disease that could prevent him from playing guitar

Right now, Peter Frampton is recording as much music as he possibly can because he’s not certain how much longer he’ll be able to do so. He told Howard on Wednesday he’s currently working on a new album, the fourth one he’s produced since October. The reason: Frampton recently went public with his diagnosis of inclusion-body myositis (or I.B.M.), a chronic muscle-weakening disease with no known treatment nor cure.

“I just didn’t know how quickly it was going to progress,” Frampton explained.

He went on to say he first noticed signs of the disease some eight or nine years ago but shrugged the symptoms off as being a byproduct of being in his 50s. “24,000 people are known to have it but I believe there’s a lot that don’t know they have it. They just think, like I did, ‘I’m getting old!’” 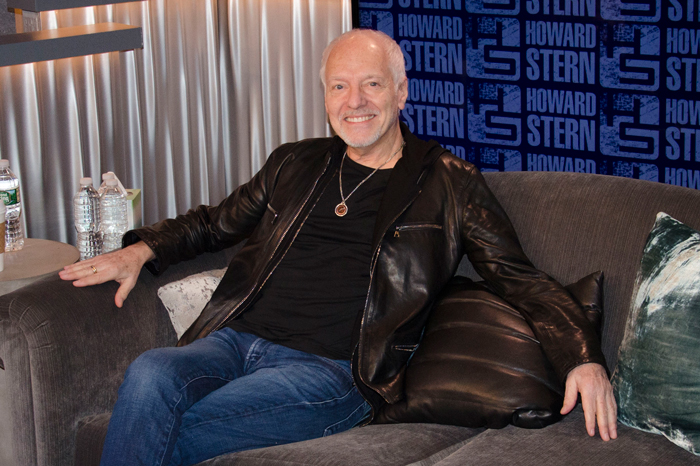 I.B.M. has affected Peter’s legs and arms and though he told Howard he can still play guitar, he’s not so sure that will be the case in a year.

“It’s not noticeable to anybody but me at the moment,” Frampton said.

Daily exercise helps Peter manage his symptoms and in May he’ll participate in an experimental drug treatment. One month later in June he’ll embark on what he’s calling his “Finale” farewell tour, stopping in over 40 cities to play guitar in front of his countless fans for possibly the last time.

“If [the drug treatment] were to work and if it were to arrest where I’m at right now, then there might be a miracle tour,” Peter told Howard. “I’m so positive about life and I always have been.”

And while he says he’ll always find a way to make music, Peter explained his new passion in life is doing all he can to help others who are suffering from the same disease. He recently teamed with Johns Hopkins to start the Peter Frampton Myositis Research Fund.

“My job now is to be the face of I.B.M. That’s what I want to become to raise awareness,” he said.

When Peter visited the Stern Show in 2016, he and Howard went through his remarkable career in rock music year by year, project by project. But on Wednesday, Frampton still had stories to share, including the day he first met George Harrison. While sitting in a London pub with music manager Terry Doran, Peter said he was invited to come back to Abbey Road Studios and meet the famous Beatle who was recording his first solo album, “All Things Must Pass.”

“He had some codename for him … It was Harry, I think,” Frampton revealed of how Doran referred to Harrison whenever they were in public so no one around them would know who they were talking about.

Peter took Doran up on the offer, but he would do more than just meet George that day. “I was nervous as hell. And then George just hands me his Les Paul [guitar], the famous one,” Frampton told Howard. George was well aware of Peter from his days with Humble Pie and wanted to know if he’d not only play on his upcoming album but if he’d play lead guitar on many of the album’s tracks.

“So I swallowed hard and I ended up playing the main guitar riffs on the first single,” Frampton continued, informing Howard he later learned George’s first pick to play lead was Eric Clapton but since Slow Hand wasn’t available that day, Peter got the call instead.

“I know where I stand,” Frampton said with a laugh.

A few short years later and after putting out four solo studio albums of his own, Peter made music history with his album “Frampton Comes Alive!” The 1976 offering broke sales records at the time and featured singles “Show Me the Way,” “Baby, I Love Your Way,” and “Do You Feel Like We Do” – all of them becoming Billboard Hot 100 chart hits. Peter quickly became a household name, known not only for his talents as a guitar player but also his good looks and full head of hair. He told Howard he soon started being seen as more of a pop idol instead of a legitimate musician. By the 1980s, he needed help in regaining his rock star image and his childhood friend David Bowie offered an opportunity to do just that, playing onstage with him on his “Glass Spider Tour.”

“He turned it around,” Peter said of Bowie. “He invited me to come and just be the guitar player, to show everybody, ‘Hey he’s a guitar player. That’s what he does.’ It was the best gift anybody could give me.”

Howard asked if Bowie, whom Peter had known since they were preteens growing up together in Bromley, England, had ever confided in him that he was sick before he passed away in 2016. As close as the two were, Frampton said he didn’t learn of David’s death until the rest of the world did.

“That’s his persona. He wanted to keep it quiet,” Peter said, adding he understood completely why his old friend kept his prognosis to himself.

Peter was also hardly shocked by Bowie’s transformation into his androgynous alter ego Ziggy Stardust in the early ‘70s. Though he didn’t see David exhibit many feminine characteristics while the two were in grade school, he did recall a story he once heard from his father, an art teacher who had Bowie in one of classes back when he still went by David Jones.

“My dad comes home on a Monday afternoon and he goes … ‘There’s the strangest thing with Jones,’” Peter remembered. “He said, ‘On Friday, I could’ve sworn he had eyebrows and he just, over the weekend, shaved them off.’”