Season 2 of Tracy’s sitcom “The Last O.G.” is airing now on TBS 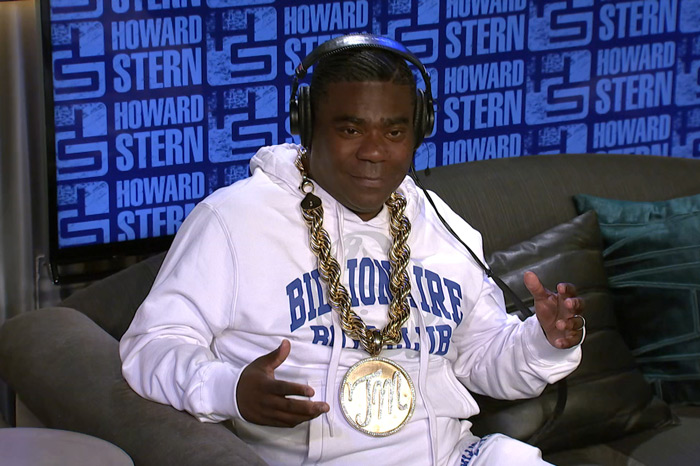 “Look at that thing on his neck!” Robin Quivers remarked as Tracy Morgan walked into the Stern Show studio on Wednesday morning wearing a gold chain he told Howard cost him around $300,000.

“I’m representing for the culture,” Tracy said. “There’s nothing wrong with a little opulence.”

His jewelry isn’t the only opulent possession of Tracy’s, either. He arrived for his interview this morning in a Rolls-Royce Phantom which he told Howard he never drives himself since he has a chauffeur to do the driving for him. Back at his house, Tracy has several substantial fish tanks including a 20,000-gallon residential shark aquarium, one of only four in the world. In addition to his sharks, Morgan also keeps octopuses, moray eels, and deadly stonefish.

Sea creatures, especially dangerous ones, have always fascinated Tracy. “I love the sea because we don’t know what’s underwater, what lies beneath,” he told Howard.

He then invited Howard and Robin to drop by some time and see his mansion for themselves. “It would be an honor for me to have Howard Stern and Robin and everybody else in my crib. And we have dinner, we have cooks, we’ll cook a meal,” Tracy offered.

Howard’s friendship with Tracy began when the two took in a few New York Knicks games together. Morgan, an avid basketball fan, is known for yelling out pointers at players and providing coaching tips from his courtside seats. Howard brought up the time Tracy was shouting out “agua” while at a game.

“You know who’s ‘agua’? Allan Houston,” Tracy said of the Knicks’ assistant general manager who also spent nine seasons playing for the team. “His jump shot was water. He has the greatest shot ever.”

New York hasn’t been able to celebrate an NBA championship since 1973 but Tracy predicts that’s all about to change. He told Howard the team is now “developing a culture of winning” and pointed out some steps in the right direction the Knicks have made recently, like hiring head coach David Fizdale and trading away superstar Kristaps Porziņģis.

“When you make a bold trade like KP … and you free up 75 [million] in salary cap, that means the rings are coming. Me and you gonna have fun at the championship games,” Tracy told Howard.

He’s also hopeful the Knicks will be able to draft Duke standout Zion Williamson later this year and improve their roster even further.

As much as Tracy knows about basketball, he’s even better versed in performing stand-up comedy. He told Howard about the advice he gave “Saturday Night Live” star Michael Che early on in the “Weekend Update” anchor’s career.

“You gotta walk the stage, I don’t give a fuck how big it is,” Tracy recalled telling Che, who back then would supposedly spend too much time during his sets leaning on the microphone stand instead of using all the space around him. “Knowledge is like love, you can’t do nothing with it but pass it on. So, I just passed it on to someone I thought was worthy.”

Becoming a good comedian takes countless hours of practice in the clubs, but as Tracy can attest to, a good stand-up never stops working out new material on a smaller stage, no matter how famous they are.

“Stand-up comedy begins and ends in the motherfucking clubs,” he told Howard.

When asked who the greatest stand-up comedian of all time was, Tracy didn’t hesitate while replying it was Richard Pryor.

“Richard is the king, we’re all just his princes,” Tracy said.

However, he also told Howard he has a wide range of comedy influences – everyone from silent movie stars like Charlie Chaplin and Buster Keaton to the physical female comedians he watched on TV growing up.

“I got my physical from Carol Burnett and Lucille Ball,” Tracy said. “That’s when comedy was comedy. When nobody was scared to take a fucking pie in the face.”

Audiences recently got to watch Tracy take on a more dramatic role in Jordan Peele’s reboot of the classic television series “The Twilight Zone,” playing a well-known comic who gives some treacherous advice to a young up-and-comer.

“He saw something in me, and he put me in a position to score,” Tracy said of Peele. “I’m glad that people got to see another side of me.”

The second season of Tracy’s own TV show “The Last O.G.” is currently airing on TBS and continues to receive critical acclaim.

“It’s a story about forgiveness and second chances,” Tracy said of his sitcom, where he plays Tray Barker, a man recently released from prison who’s stunned to see how much the world has changed while he’s been locked up.

Actress Chrissy Metz makes a guest appearance on the show as Tracy’s “transition chick,” a woman who falls in love with him while he’s incarcerated. Dating an inmate is something Tracy has learned about from his cousin who has explained to him she enjoys being romantically involved with men serving time because she always knows where they are, whom they’re with, and, more importantly, whom they’re not with.

“The whole cast, I love all of you guys,” Tracy said on air to his “Last O.G.” co-stars. “I know everybody’s name on my fucking set. From the grips to the craft services to the E.P.’s, I don’t give a fuck. We ain’t gonna win if we don’t do this shit like a family.”