Bella Thorne Opens Up About Love, Weed, and Her Raw New Book of Poems

Bella Thorne Opens Up About Love, Weed, and Her Raw New Book of Poems

Her new book, “The Life of a Wannabe Mogul: Mental Disarray,” is available now

Flip through the pages of Bella Thorne’s new poetry book, “The Life of a Wannabe Mogul: Mental Disarray,” and it’s clear she’s experienced a lot in her 21 years. On Tuesday, she sat down with Howard for the first time and opened up about some of the deeply personal topics she writes about, including her relationship with her mother, the death of her father, and falling in love.

In Bella’s book, she writes about her romance with rapper Mod Sun, even suggesting that she considered him her husband. They’ve since split up, but Bella told Howard they did have somewhat of a wedding ceremony before calling it quits.

Howard asked what caused the two to break up and Bella explained Mod got upset with her for going to Coachella instead of being with him in a time he needed her most. He sent her a text message telling her they were through.

“I think that love is really funny and fickle,” Bella told Howard. “I can say that I am very hurt so obviously there’s a lot of love still there.” 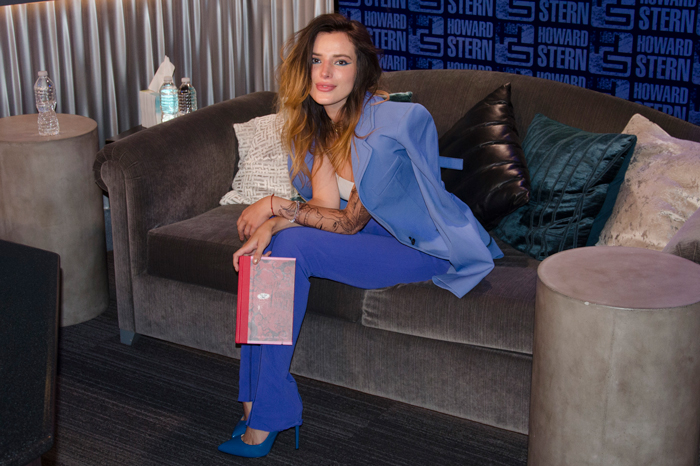 Mod made it even worse after he told Bella’s mom about some of the poems her daughter wrote about her in the new book prior to its release. As complicated as Bella’s relationship with her mother might be, she made it clear to Howard they are and always have been very close.

Her work as a published author isn’t slowing Bella’s acting career down – she’s currently shooting a film on location in Oklahoma and flew in early this morning for her Stern Show appearance. Whether or not she even wanted to be in show business was not a question Bella was ever asked. Her first paid gig came when she was just six weeks old and she hasn’t stopped performing since. From her stint on the Disney Channel series “Shake It Up” to her leading roles in Hollywood films like “Midnight Sun” and “The Babysitter,” Bella’s long string of successes has carried into adulthood. If she has any say in it, though, her career apex has yet to come.

“My biggest dream, ever since I was little, is to win an Oscar,” Bella told Howard. With that goal in mind, Bella explained she tries to be extremely particular in the projects she picks for herself, favoring small indie flicks to the blockbuster superhero movies.

Her other aspiration is to achieve mogul status by the time she turns 26. Considering she has over 20 million followers on Instagram, Howard told her she seems to already be a mogul. Managing her social media accounts has become a job within itself. In addition to posting two to three times a day lately leading up to the release of her book, Bella works hard to keep her own brand authentic. Just as she tries to make smart choices about the films she stars in, she also strives to collaborate with partners she wholeheartedly believes in.

“I do all my own deals,” Bella told Howard, saying she’ll reach out directly to companies to ask if they’re interested in being in business with her. “It has to be such a natural integration with my brand that it cuts down a lot of the shit that I can’t do.”

Thorne hasn’t yet launched her own marijuana line (she’s previously talked about doing so) but she told Howard there’s only one weed in the world she’s willing to smoke.

“My weed is ‘Forbidden Flowers’ and it’s this company that does it that it grows literally in a glass house,” Bella said. “It’s euphoric.”

Her weed expertise rivals even her friend Snoop Dogg, who according to Bella once told her she could out-smoke even him. She wouldn’t tell Howard just how many joints she smokes a day but admitted it’s a lot.

As candid as Bella was in her Stern Show debut, some of what she writes in her new book will no doubt show a new side of her to a lot of people. Howard wondered if she has any concern over the rawness of her poems giving the wrong impression to future film directors looking to work with her. Bella’s not worried – in fact she thinks this project will help set her apart from other actresses.

“That is so much of the beauty of my acting,” she told Howard. “You can ask me to go somewhere … you can ask a lot of actresses to go there, but I can go there because I’ve maybe been there.”