Shuli Egar, Benjy Bronk, and Chris Wilding all consider taking on the internet sensation in the ring

Is there anyone on the Stern Show willing to get in the ring with Chris “the Bagel Boss Guy” Morgan? The viral video star came in to talk to Howard on Tuesday and was hopeful he’d find himself a fight with someone on the staff, starting first with Shuli Egar. Celebrity boxing promoter Damon Feldman was also in studio and said he’d been trying to strike a deal that would earn Shuli $5,000.

“Shuli, I want you. You’re mine. C’mon man,” Morgan said to Shuli, goading him to agree to a fight.

“Calm down over there, Sneezy,” Shuli shot back. 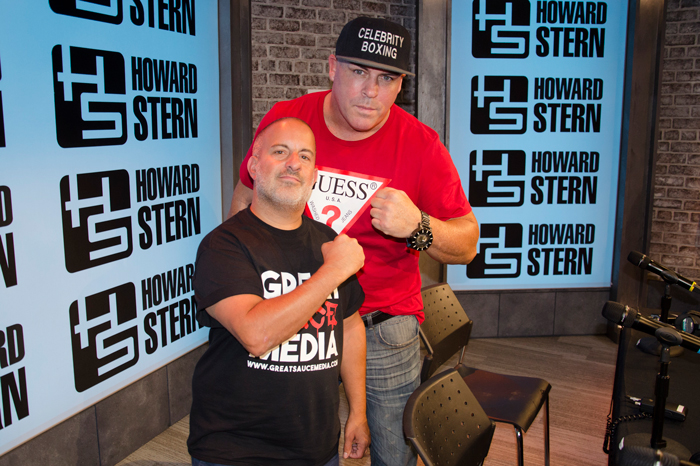 As confident as he was in his ability to beat Morgan, Shuli said the $5,000 offer just wasn’t enough since he already makes that much money telling jokes for an hour on stage.

“I appreciate the offer, Damon. I’m not that starving for attention or notoriety,” Shuli continued.

Fellow staffer Memet Walker walked into the studio and said he’d be willing to fight Morgan for $10,000 but unfortunately his size automatically disqualified him as an opponent.

Benjy Bronk also came in but only because he wanted to see if he could tickle the “Bagel Boss Guy.” Morgan wasn’t interested in letting the staffer touch him and Benjy admitted he was too scared to participate in a boxing match. JD Harmeyer also said he was too afraid of Morgan to face off against him.

The closest Morgan came to a fight was with Chris Wilding who came in steaming angry after hearing today’s Stern Show guest use a gay slur.

“I’ll fucking knock you out for free, dude,” Wilding yelled.

Morgan was ready to throw down, calling Wilding an “ignoramus punk” and mocking him for his haircut. The insults were flying back and forth but in the end, the Stern Show staffer wasn’t interested in a boxing match against Morgan.

“I’m a nobody and even being a nobody, you’re beneath me,” Wilding explained.

Morgan and his manager Anthony Cross disagree with Wilding’s assessment, though. According to them, Morgan’s future looks very bright following the viral video that showed him getting into a verbal and physical altercation with customers at a Bagel Boss store. Howard wanted to know what exactly set him off that day and Morgan explained it all started when he suspected an employee behind the counter was laughing at him, presumably due to his size.

“That’s when I said, ‘Excuse me .. what’re you doing?’” Morgan recalled of what he said to the Bagel Boss worker. Eventually others in the store got involved and, as anyone who’s seen the video knows, Morgan wound up being tackled to the ground by a man nearly twice his size.

Morgan said part of the problem that day was that the employee he thought was laughing at him was a woman. She’s hardly the first female to mock him for his short stature.

Dating hasn’t been easy for Morgan, who said he’s been mistreated in the past both online and even while out with women, all because they think he’s too small to be a suitable partner. That’s not to say he hasn’t found love a few times in his life.

“I had girlfriends. I had plenty of girls, believe it or not,” Morgan said. He was even once married to a woman slightly taller than him. He’s not letting past experiences discourage him, however. He revealed he just had sex in April and has been receiving a lot more attention from the opposite sex due to his newfound fame.

Morgan and his management team left the Stern Show studio without any punches thrown, but coming back from the commercial break Howard told Robin there might soon be a boxing match after all. Shuli supposedly told Damon in the hallway he’d fight Morgan so long as he got paid upfront.