Comedian also talks his early days waiting tables, opening for Andrew Dice Clay, and the time he forgot his own material on “The Tonight Show”

To pay or not to pay?

That was the question comedian Sebastian Maniscalco told Howard he became “fixated” on after being invited out to dinner by Jerry Seinfeld. At the time, Sebastian hadn’t quite achieved the celebrity status he has now and his bank account was certainly no match to Seinfeld’s multimillions.

“I don’t know if this guy orders $16,000 bottles of wine so I don’t want to give the credit card upfront because I don’t know where this is gonna go,” Sebastian recalled of what he was thinking while walking into the restaurant that night.

When Seinfeld later handed the wine list to Sebastian and asked him to make a selection, the matter of who would pick up the tab seemed all but settled in Maniscalco’s mind. “If you’re ordering wine, you’re paying, right?” he asked Howard with a laugh.

The wine came, their meals came, but the bill was never dropped on the table. At the end of dinner, Sebastian explained he and Jerry simply said their goodbyes and went home. The two quickly formed a friendship, though, and continued to hang out one on one. Sebastian said he eventually had to ask Seinfeld how he magically made the check disappear that night. Turns out, it’s a move Jerry uses nearly every time he goes out – he calls the restaurant ahead of time, makes a reservation, provides his credit card number, and tells them to charge him for the entire meal so that whomever he’s eating with can’t even attempt to pick up the tab. 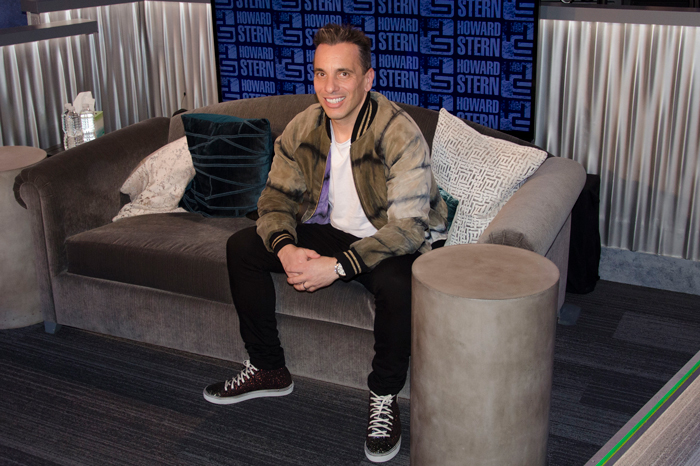 Sebastian’s first dinner with Seinfeld came after the two performed back-to-back at New York’s Gotham Comedy Club. Sebastian learned last minute that Jerry would be stopping by to do a set ahead of Maniscalco’s scheduled appearance. While he was excited to meet Jerry, Sebastian was a bit uneasy about taking the stage after such a legendary performer.

“I’m in the back going, ‘How in the hell am I gonna segue from Seinfeld into my act?” Sebastian told Howard.

Once out in front of the audience, Sebastian said he made a crack about the scarf Seinfeld was wearing that night, which got some laughs from the room. “Unbeknownst to me, Seinfeld is in the back watching my act,” he continued.

Seinfeld was far from offended, though. Not only did he enjoy Sebastian’s set, he recommended his wife and her friends go see Sebastian the very next night.

Before Sebastian was going out to dinner with A-list stars, he was the one taking their orders as a waiter at Windows Lounge, an upscale restaurant inside the Four Seasons Hotel in Beverly Hills. For seven years, Sebastian served celebrity clientele like Nicole Kidman, Sean Penn, and John Travolta.

“Conan [O’Brien] came in one night and I thought about telling him I was a comedian or maybe sending him a little tape or something,” Sebastian admitted. He thought better of it and instead kept honing his craft and taking comedy gigs wherever (and whenever) he could. “During my break, I’d go to the Comedy Store, do a 15 minute set … then I’d run back.”

His hard work paid off and eventually Sebastian got a break courtesy of Andrew Dice Clay. One night, after Michael “Wheels” Parise introduced the two of them at the Comedy Store, Dice gave Sebastian a tip on how to make a name for himself in comedy: he suggested he stuff something down his pants to make his manhood look bigger on stage.

“’You don’t even mention it, you just have a big cock,’” Sebastian recounted in the Diceman’s voice. “As a young comedian, I’m thinking, ‘Is this gonna work?’”

Maniscalco opted out of stuffing his pants, but the mentoring didn’t end there. Dice also told him to be patient with his career and try not to focus on the successes of his peers. The two eventually took on Las Vegas together with Sebastian opening for him at the Stardust Resort and Casino.

Sebastian naturally assumed he and Dice might have a wild time together in Sin City, but as it turned out Andrew kept things pretty low key. “So, we go there, and he goes, ‘We’re going furniture shopping,” Sebastian said, adding he then tested out a few $8,000 couches for Andrew’s Las Vegas home.

Opening for Clay was an invaluable learning experience, but it wasn’t always easy. He admitted the testosterone-filled crowds were sometimes hard to win over, recalling one particularly rough Reno gig in particular. “There was one time they really rattled me, and they were yelling stuff and I couldn’t really understand what they were saying. I cut my set short, and Dice laid into me,” Sebastian said, explaining how Dice taught him it’s the comedian responsibility to use the time they’re given no matter how bad the circumstances.

Dice’s lesson wound up being one Sebastian would need to remember years later during an appearance on “The Tonight Show.” One minute into his routine on the NBC late-night show, Sebastian told Howard he suddenly forgot all of his jokes. With the cameras pointed right at him and the studio audience dead silent, Sebastian simply stopped talking.

“I went completely dark,” he remembered. “I had so many things going through my head. I’m like, ‘OK, this is it. Career’s done.’ Should I turn to Jimmy and go ‘Can we start over?’ But I didn’t know if you could do that so I’m just trying to find my feet again.”

He did find his feet and finished the set without any other issues. During the commercial break, Sebastian turned to Jimmy Fallon and apologized for the gaffe, but the host assured him moments like that happen all the time. Sebastian’s set was edited that night so viewers at home remained unaware of his mistake. He’ll also get a second chance on the “Tonight Show” stage when he drop by as one of Jimmy’s guests later this week.

Among those likely tuning in are Sebastian’s mother and father who have played an integral part in shaping their son’s career. “I always knew I had an innate ability to make people laugh because I used to make my family laugh,” he told Howard.

As Sebastian describes it, his family can be both his biggest supporters and his harshest critics. In his early days on the stand-up circuit, his ponytail-wearing hairstylist father used to sit in the audience and take notes while his son performed so he could give him feedback later. His mother pushed him to perform even earlier, entering Sebastian into a shopping mall modeling contest when he was just eight. She even dressed him in leather pants and a jacket and helped him plan a whole routine.

“I came out, I did a dance to ‘Eye of the Tiger,” Sebastian told Howard.

Despite Maniscalco’s many successes, he said his folks still help him out to this day. His father’s quick to remind him to freshen up his material — “He’s always on my ass,” Sebastian said. “He didn’t want to be embarrassed because if I came to Chicago he would invite a lot of people from the salon.”

Sebastian’s mother, meanwhile, serves as his test audience whenever he’s working on new material. While some comedians, like Seinfeld, take meticulous notes of everything they think and observe, Sebastian has a different approach. “I don’t really write,” he told Howard. “I tell stories. The way I work is I will go and call my mom and I’ll tell her, ‘Mom, this is what happened to me on Stern,’ … and if I get her rolling, I go this is a possibility to go on stage.”

His parents’ career advice extends beyond the stand-up stage, too. The entertainer has recently found success in feature films, appearing opposite fellow Stern Show veteran Jeremy Renner in last year’s raunchy comedy “Tag” as well as in Peter Farrelly’s Golden Globe-winning drama “Green Book.” Even though Sebastian didn’t get an invite to the Golden Globe awards ceremony alongside stars Mahershala Ali and Viggo Mortensen, that didn’t stop his parents from encouraging him to crash the party anyway.

He didn’t heed their advice this time around, but he might have another chance after his next project “The Irishman” comes out. Directed by legendary filmmaker Martin Scorsese, the gangster flick stars icons like Robert De Niro, Harvey Keitel, Al Pacino, and Joe Pesci.

Landing the part was the furthest thing from easy, however. Sebastian said he performed unevenly during his first audition, but the casting director gave him another opportunity. “I relished in the second chance,” he told Howard. “And I did it. I sent it in, they showed Scorsese. He said … ‘I like it for another part’ and, boom, I got the role. First day, I’m acting with De Niro and Pesci.”

But in the end he got along well the Hollywood legends. Sebastian recounted sitting in Pesci’s trailer after one day of shooting and getting acting advice from the “Goodfellas” and “Casino” star. He also said he hit it off with Scorsese—perhaps a little too well. After bonding over their love of family, the director nearly talked him into throwing himself through a glass plate for an action scene.

Sebastian had expected a stunt man to perform the feat, but he wasn’t about to disappoint the Oscar-winning filmmaker: “What am I gonna say, ‘Hey, Marty, listen—I don’t do glass.’”

Mercifully, a crew member intervened at the last second and reminded Scorsese there was a stunt man on set to take the fall. “It was an unbelievable experience” Sebastian finished.