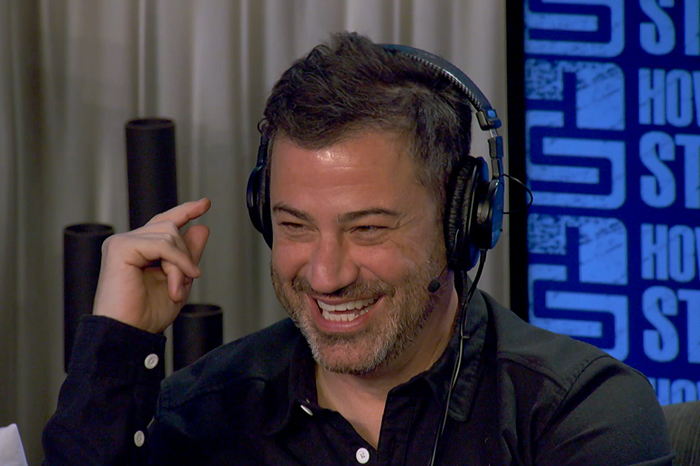 Howard was back in his New York studio on Monday, his first broadcast following a special week of shows out west at SiriusXM’s new Hollywood location. There was a very familiar face sitting across from Howard this morning, too – Jimmy Kimmel, who was on the Stern Show just 14 days ago.

“Jimmy’s here doing his show … over in Brooklyn, so he is stopping by and hanging with us,” Howard told his audience, joking it’s as if they never left California.

Jimmy’s late-night series is doing the reverse of what the Stern Show just did, moving the production to New York City for the week. As good as the guests always are on “Jimmy Kimmel Live,” there are some big names dropping by the ABC show while it’s on the East Coast, starting with none other than Bruce Springsteen on Monday night.

After living in Los Angeles for a week, Howard couldn’t believe how much marijuana has changed the culture throughout the city. “It’s so weird the difference in L.A. with weed being legal,” he said to Jimmy who has lived in L.A. for several years. Smoking weed recreationally remains illegal in New York, however, which seems strange considering how easy it was for several members of the Stern Show to get their hands on it while out in California, including JD Harmeyer who got high for the first time out on the West Coast. Turns out, his first time wasn’t his last since he continued to toke up throughout the rest of the trip.

“You love it!” Howard told his staffer on Monday. “Short of growing dreadlocks, JD has become such a pothead.”

While he didn’t deny smoking weed several more times while in L.A., JD told Howard he hasn’t smoked again since getting home. If he does try to get high again, there is one thing he needs to improve upon, though.

“I do think I need to practice my inhaling. I don’t think I inhale completely every time,” JD admitted.

VIDEO: Memet Walker Moped Around L.A. After His Latest Commercial Pitch Got Rejected