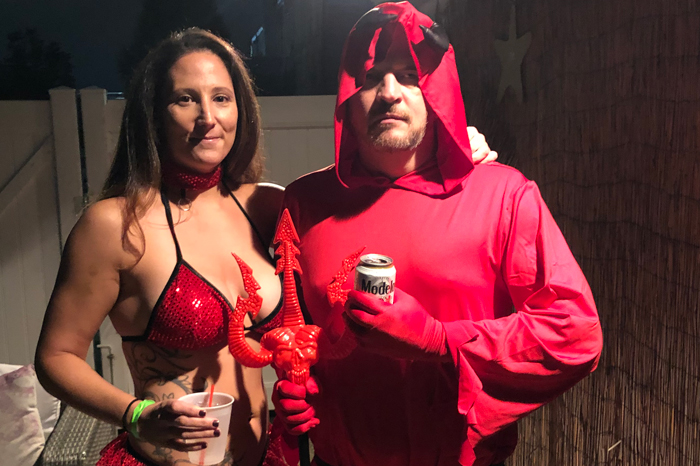 “Was it disturbing for you?” Howard wondered.

“Very disturbing. I’ve never seen anything like this,” Steve responded. “It was just animalistic. There was nothing sexy about it. Everywhere you look somebody’s got their dick out. People are getting blown everywhere.” 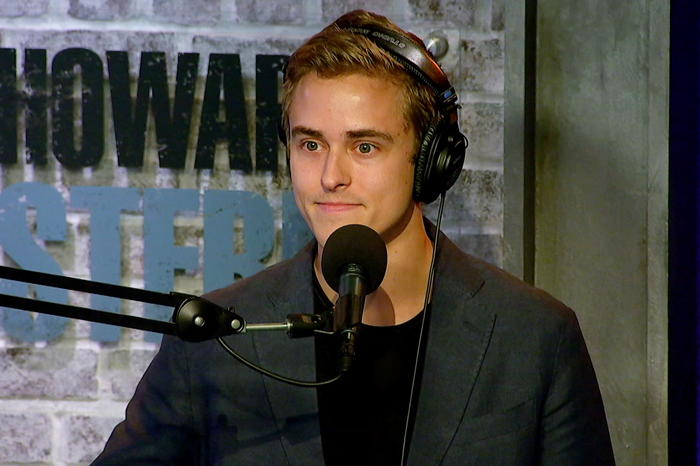 Howard wondered if Steve was uncomfortable seeing his co-worker in such a compromising situation.

“He was fluffing his penis all night while I was talking to him,” Steve said. “I was like, ‘What are you doing?’ And he goes, ‘Trying to get hard man … you gotta be laying nice,’ and he’s like flicking his penis the whole time.”

The Hatleys dressed up as devils for the party, though Katelyn’s outfit was considerably more revealing. Steve interviewed the two of them just before entering the club and they spoke about their outfits. 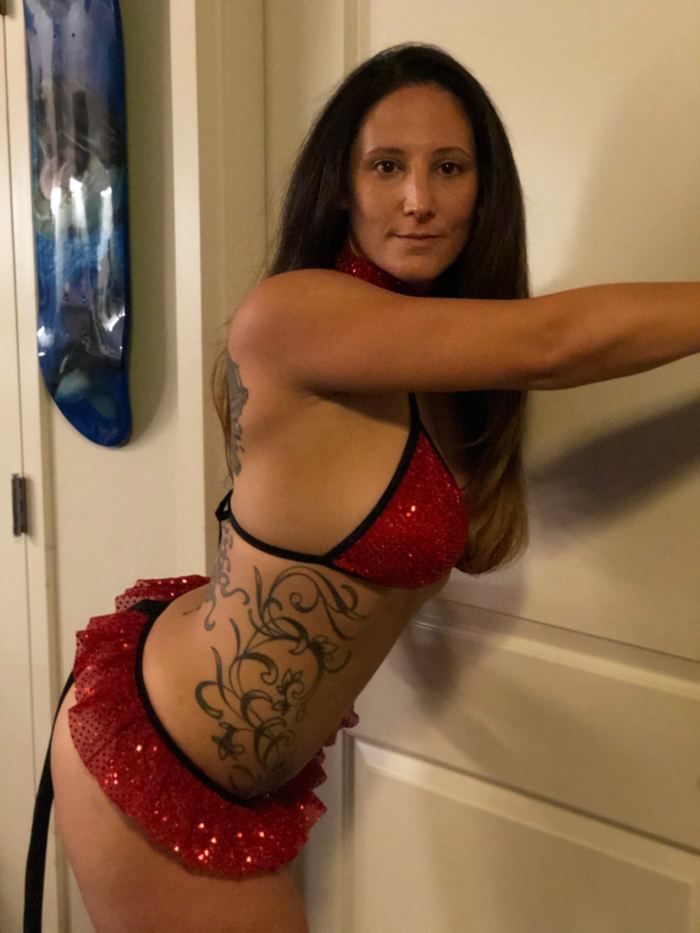 “I’m a hot devil, a very sexy devil,” Katelyn said on the tape.

“The devil’s cool, man. He’s got all the hot chicks—all the weed,” Brent added, explaining he’d also brought with him a “sex bag” filled with condoms, lube, hair ties, and even tampons that Katelyn will sometimes use to clean up following intercourse with her husband.

Brent came into the studio on Wednesday to share his side of the story and to talk more about his sex bag and atypical uses for tampons. He also copped to taking Viagra before going to the club, which made Stern Show co-host Robin Quivers wonder why he spent so much time “fluffing” himself.

“You get cock checked,” Brent told her. “Women will reach down and touch your cock. You don’t want to be, like, completely soft—you want to be half chubbed.” 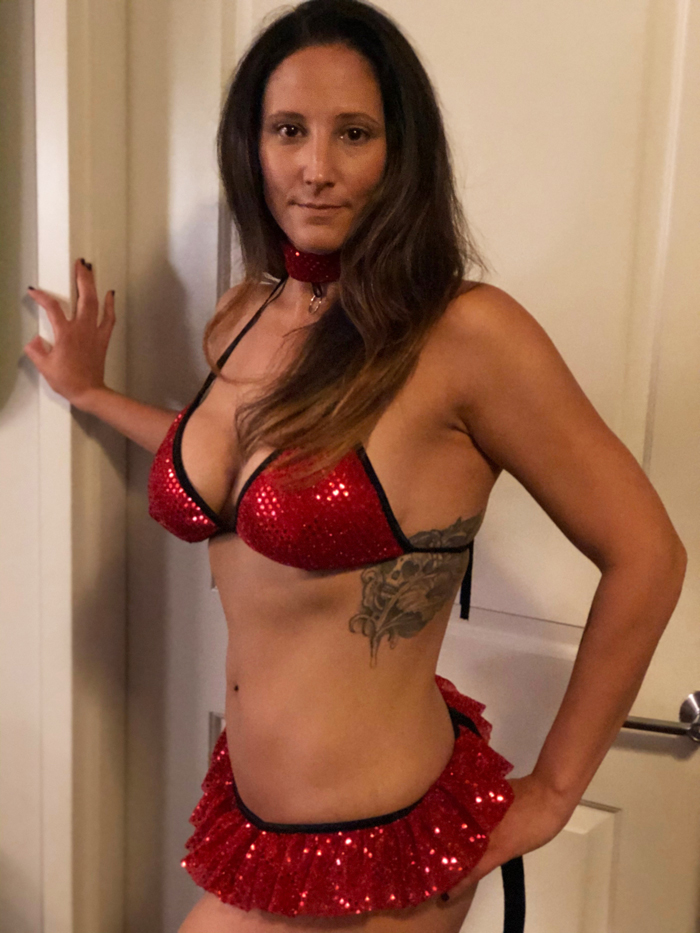 Fine dining this was not, however. Nowicki said the club smelled horrible, the floors were sticky, and there were discarded condoms strewn about. At one point, he caught up with one of the club’s custodial workers who opened up about the craziest things he’s seen.

“One girl shit one time in the bathroom, and it looked like Hershey’s chocolate on the wall, next to the toilet,” he said. “If you shined a black light upstairs it would glow.”

“Does that sound inviting to you at all?” Robin said after hearing the tape. “Why are they going there? It sounds disgusting.”

“Yeah, but he gets all the ziti he can eat,” Howard joked.

Steve confessed the food wasn’t the only unappetizing part of the experience: the clubgoers also weren’t very attractive. “It wasn’t a great looking crowd … It was like a 4 or a 5 median rating,” he told Howard.

The participants did come from all walks of life, though. He interviewed an elderly Russian couple about their best swinging experiences and, while their answers weren’t easy to understand, they did seem to be having a great time.

Brent and Katelyn, meanwhile, started off slow. They grabbed drinks and headed to the dance floor where they got familiar with another couple, one of whom had recently enjoyed a Brazilian wax.

“Brent … he doesn’t dance much. He just swings back and forth,” Steve recounted.

Things finally got steamy while Brent was in the bathroom and Katelyn hooked up with a new couple dressed like Captain America and Wonder Woman in his absence. But the steam left the building when Brent returned and attempted to join in.

“It was like throwing a bucket of water on a fire,” Steve told Howard. “They were going at it … and then Brent came out and they just fucking ran away.”

After that misfire, Katelyn persuaded Brent to ditch his devil costume and change into more attractive clothes. He and Katelyn then took Steve upstairs, toward the club’s more hardcore areas, but as Steve described it there was a long line to get into private “fuck rooms” and some swingers grew impatient.

The Hatleys soon clicked with a couple in the smoking room. Instead of waiting for a private room, they started getting intimate with them in the hallways.

“The other woman is sitting on the bench,” Steve described. “Katelyn is on the floor, on her knees, with her head in that woman’s pussy. That woman’s blowing her own husband and, uh, Brent is like sitting to the side of them and kind of grabbing the woman’s boob.”

“It just sounds to me like Brent’s trying to get a hand in,” Robin laughed.

Brent and Katelyn eventually got a private room and reportedly spent 25 minutes in there with the other couple. After emerging, they were eager to tell Steve all about their exploits. Brent even had some olfactory evidence.

“Smell my mouth,” Brent told Steve after exiting the room. “That was super steamy.”

Brent said he received oral from the other woman in the room and Katelyn had sex with the other guy, who apparently didn’t last very long and then got jealous after watching the Hatleys hook up with this girl.

“Oh my God,” Howard said after hearing all the details. “You two are wild.”

However, Brent’s co-worker Shuli Egar remained skeptical. “We had a correspondent there. Visually, what he saw Brent doing sexually, the only thing he can confirm with his own two eyes—correct me if I’m wrong—is jerking off,” he said.

“Yes, but I can confirm his breath smelled like a sweaty vagina,” Steve said with a laugh.

Steve interviewed Brent and Katelyn one final time after they left the club.

“How would you describe this night? Like, sum it all up in one sentence?” he asked them.

“Steamy suckings and pussy eatings,” Brent responded while his hand was down his own pants and massaging his penis.

The Hatleys told Steve they were so fired up by their experiences they couldn’t wait to go home and have sex with each other. They even planned to get things started in the Uber, though it was later revealed Brent fell asleep on the way home.

“You deserve a raise,” Howard told Steve after his report concluded.

“Thank you, Steve,” Robin agreed. “That was like going to a war zone.”