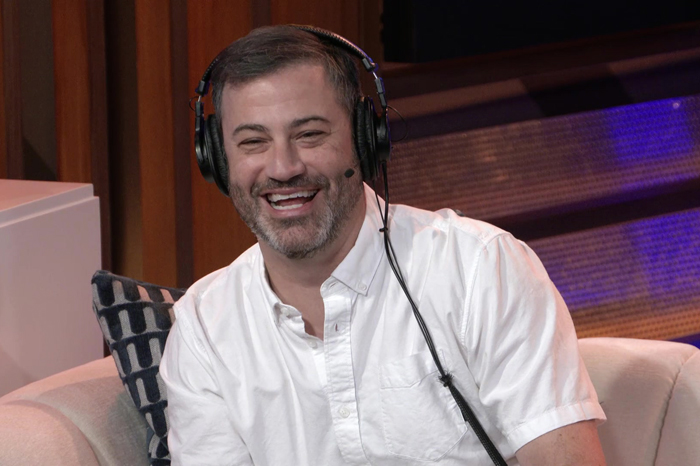 In the studio Monday to help welcome Howard to Hollywood was close confidante Jimmy Kimmel and the late-night host wasted no time in divulging his thoughts on what’s going on with the show and Howard in general.

Admitting, “I think about Sal and Ronnie a lot more than I should,” Jimmy was quick to note that there’s a void in his life since the latter hasn’t put out one of his famous sex tips in some time. After a weekend of camping, Jimmy wanted to try one of Ronnie’s tips in bed last night but “Ronnie doesn’t give sex tips anymore and now I don’t know what to do,” he said. “The whole thing was over in four minutes.”

Ronnie eventually obliged and gave Jimmy a brand-new sex tip on the spot, advising him he could’ve sent a sext while out on a hiking trail.

Discussing their recent trip to Tennessee, in which he revealed Jimmy was one of his fellow travelers, Howard asked if he was fun.

“You were a lot of fun,” Jimmy confirmed. “But it always seems like you … feel a responsibility to be fun, which you should never have to feel.”

“Yeah, it feels like work,” Howard allowed. “I have an obligation, I’m at the table, if I sit there like Jimmy who doesn’t say anything all night, everyone’s going to be sitting and eating.”

Speaking of other dining companions of Jimmy’s, the host discussed having dinner with former First Lady Michelle Obama a couple of years back and, more recently, hosted a Q&A in support of her book in Seattle. “She’s fantastic,” Jimmy said. “She’s one of those people, you meet her and you feel this, like, overwhelmingly positive energy coming from her.”

Less overwhelmingly positive was the reception Jimmy received after roasting Bill Gates on his last day at Microsoft. “The only person laughing was [Clippers owner] Steve Ballmer and he was laughing like a maniac, which in a way made it worse,” Jimmy recalled. Jokes such as the one that pointed out Gates would have gotten a perfect SAT score were it not for the question about what a vagina looks like failed to resonate with the tech bigwig.

In further discussion about their relationship, Howard said there was just one thing about Jimmy that annoys him: that Jimmy had a “Late Night With David Letterman” license plate when he first started driving. “That’s crazy that you did that because that’s just not like you,” Howard expressed.

“I’m going to give you more things that will bother you,” Jimmy confessed. “In high school, every book cover was “Late Night with David Letterman the chemistry text book.”

When asked if he keeps in touch with his hero Letterman, Jimmy said every now again, but, “if he hears about this and the book covers and stuff yeah, I’ll never hear from him again.”