Hollywood has been a major force in Kristen Stewart’s life since the very beginning. Her mother was a script supervisor and her father was a stage manager while she was growing up, which meant she was practically raised on film sets. While most 11-year-olds were still playing with toys Kristen was busy filming a major motion picture with Oscar winner Jodie Foster. She became a superstar almost overnight in 2008 after portraying Bella Swan in “Twilight,” but when the 29-year-old actress sat down with Howard for the first time on Tuesday, she revealed few actresses in Tinseltown even viewed it as a coveted role.

“Nobody knew it was going to be such a big thing, it was sort of like—you get a part or you don’t,” she told Howard. “I hadn’t even read the book when I started making the movie.”

Her “Twilight” fame had its advantages, including her choice of roles, a legion of loyal fans, and, eventually, the means to buy herself a great big house like the ones she’d biked past in nearby Calabasas when she was just a girl. But her newfound status came with drawbacks, too, like a level of scrutiny she could have never imagined.

Kristen was suddenly swarmed by paparazzi and for over a decade now she’s barely been able to show her face in public without her picture ending up in tabloids.

“They just sit outside my house. There’s really no getting away,” she explained.

They even hound her while she’s driving, too, which would upset her because it’s so unsafe. “I used to be out of my goddamned mind about it, and now I’m not,” Kristen told Howard. “You just have to like breathe through it.” 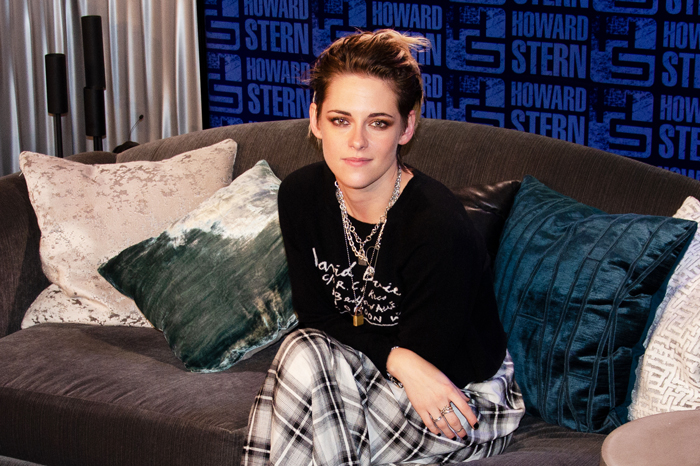 “Twilight” is a coming-of-age adventure story in which Kristen’s character becomes embroiled in a supernatural love triangle with a werewolf and a vampire. “I was super aware that we were doing like a teen movie and I had never done that before,” Kristen said, explaining she was eager to finally embrace a weird and indulgent role. “And it felt amazing.”

Fans flocked to the franchise and were drawn to the onscreen romance between Stewart and Robert Pattinson, the vampire. The two had palpable chemistry in the film and the world wasn’t all that surprised to learn they eventually fell in love on set as well.

Kristen opened up about their relationship on Tuesday. “It’s so weird actually being honest about this,” she told Howard, adding, “I’ve actually never been allowed to just say what happened because I was so self-conscious about seeming like an attention seeker.”

Unsurprisingly, the tabloid press went into overdrive as details of Stewart and Pattinson’s relationship first began to emerge. She loved him a great deal but told Howard that living under a microscope forced them to make several tough decisions as a couple.

“Do you live, like, openly and share your life in a way that actually entitles you to living it sort of more freely and naturally?” she wondered. “Or do you like put it on lock because you hate the idea of like perpetuating this commodified version of something that feels real to you?”

They ultimately sought privacy which deprived them of a great many experiences. Kristen wanted to scream about her love of Robert from the rooftops but couldn’t.

While her romance with Robert didn’t stand the test of time, Kristen really did at one point believe he was the one. In fact, she’s felt that way with most of her exes. “Every relationship I’ve ever been in, I thought that was it,” she said. “I’ve never been like the most casual person.”

She confessed she’s not much of a traditionalist when it comes to relationships, but she’s is looking forward to one day getting married.

“I recommend marriage,” Howard told her. “I think it says to people this is the person I hold above all others and I want to announce that to the world.”

“That’s how I feel, too. There is nothing like feeling sure,” Kristen said, adding, “Honoring that [tradition of marriage] and having other people recognize it—fuck the government—but just people and your friends and your family, that means a lot to me.”

Kristen revealed those wedding bells may be coming sooner than anybody realizes. She’s currently in a very serious relationship with a writer just a few years her senior.

Not only does Kristen believe marriage is on the horizon, but she has already come up with a great idea for how she might propose to her girlfriend—though she declined to share it on-air for fear she might be listening.

Kristen was thrilled to wax romantic about the love of her life and told Howard she was also grateful the world has mostly evolved to a point where she’s no longer asked ignorant and reductive questions about her sexuality.

“On some level, the fervent question that was demanded of me for so long is now ridiculous. It’s a non-starter,” she said.

“People change every day. There is no reason why anyone needs to provide like an easy narrative for other people to digest,” she continued. “Why would I simplify something very complex just in order for you to feel more comfy?”

Howard admired her bravery. “The way you’re living your life is a beautiful example,” he told her.

Kristen’s courage has manifested itself in other ways, too. She told Howard she’s never been the victim of any #MeToo-style harassment or assault but has witnessed inappropriate behavior during shoots—and she hasn’t been shy about speaking up.

“I’ve seen people do it to other people on set and it’s like made me kind of enraged,” she said, explaining she once called out a crew member after they put their arms around someone in the workplace. “I would literally sit on set and say ‘She probably doesn’t want you touching her, I’m just saying!’ Like, call it out. ‘You’re being a weirdo, stop.’”

Howard had heard another weird story about a wealthy Saudi Arabian man who donated $500,000 to a Harvey Weinstein charity for the opportunity to spend just 15 minutes with Kristen. He was curious if the rumor was true.

“That sounds terrifying, and that happened,” she told Howard.

Kristen said the man had propositioned her through a variety of channels, but for a while she managed to avoid him. “I knew about this person and I was like, ‘No, no, no,’” she told Howard. When she showed up at a fundraiser one evening, however, she soon realized Harvey had set up a meeting between the two of them without letting Kristen know.

Kristen said she was happy to raise so much money for charity and probably would’ve agreed to the meeting had she known about it, but she still felt like Harvey lied to her. “I was coerced into a really good thing … but to do that to someone and not tell them is, like—it’s a Harvey Weinstein move,” she said.

Kristen shot several acclaimed independent dramas after appearing in “Twilight” and opposite Charlize Theron and Chris Hemsworth in the fantasy blockbuster “Snow White & the Huntsman,” but now she’s returning to the studio circuit with a few big upcoming projects. In addition to 2020’s “Happiest Season,” which she described as a gay coming-home-for-Christmas movie, Kristen headlines next week’s much-anticipated “Charlie’s Angels” sequel alongside actresses Ella Balinska and Naomi Scott.

Like the TV show and films before it, “Charlie’s Angels” follows a trio of women who fight bad guys all across the globe. She said they shot the film in Berlin over the span of about four months and, while it does contain plenty of stunts and action sequences, she wasn’t forced to learn karate. “I can fake it really well,” she said. “I can do a tornado kick.”

“Yeah, these bitches are taking it back,” she said, adding, “Charlie’s a movement in our movie. We run the company.”

As fearless as Kristen may be in the face of onscreen villainy, off-screen injustice, and real-life international suitors, Kristen told Howard a few things still give her nightmares. One of them is appearing on “Saturday Night Live” as she did this past weekend to promote the new film.

Kristen has hosted twice now but performing live comedy to millions is still pretty far outside her comfort zone. Robin noticed she was jumping up and down when the show wrapped and wondered if it was because she was relieved to be done with the whole thing. To the contrary, Kristen said she told the show’s executive producer Lorne Michaels that she’d be happy to come back and host a third time.

“It’s just scary, but everything I do is scary. I put myself in high-pressure situations and I thrive on it and I love it, but it’s a lot,” Kristen explained. “I wouldn’t have it any other way.”