Howard welcomed two special guests into the Stern Show studio on Monday – brothers and Black Crowes founders Chris and Rich Robinson. The duo delivered some incredible news during their sit-down with Howard and followed it up by performing three of their most beloved songs.

“We’re announcing that the Black Crowes are together and that we’re going on tour next summer,” Chris told Howard and his listeners shortly after entering the studio.

The tour will celebrate the 30th anniversary of their quintuple platinum debut album “Shake Your Money Maker” and will feature the band playing the entirety of the record every single night.

“This is a miracle,” Howard said after hearing the news.

The brothers were still on the outs in 2017 when Chris last sat with Howard and as Stern Show fans may remember he didn’t shy away from discussing their relationship. “I said some horrible things,” Chris said on Monday. “I was in a negative place, but you know what I’ve apologized to Rich about that.”

“In my life, a lot of things have changed for me in the past two years,” he explained. “I needed to go into the wilderness. I needed to deconstruct that first part of my life and the good, the bad, the indifferent—all of it.” 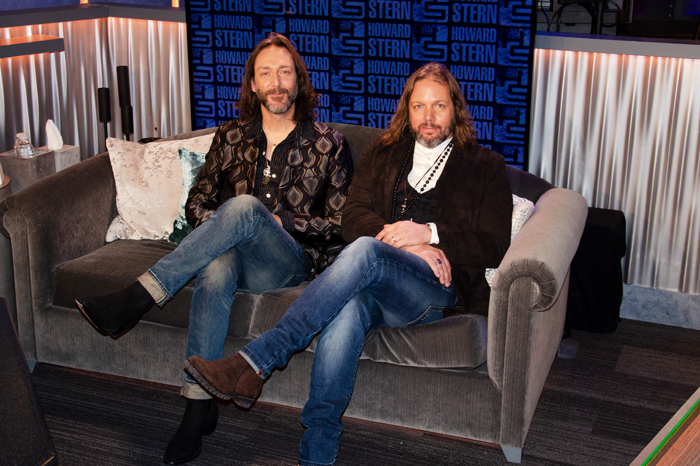 For a while it seemed like the two might never be in the same room again let alone share the same stage. Each brother said they had learned to enjoy making music with their own bands, but they eventually figured out something was missing. “Although it was great to play with those guys … the more I delved into that, the more it was obvious there was a glaring omission, which was my brother,” Rich said.

Thankfully, both men decided to share their feelings with a mutual friend and business associate who then encouraged them to try and mend fences. Howard was delighted they decided to reunite and wondered what had inspired them to build their tour around the band’s seminal 1990 album.

“It was the most successful one, and it was our first one,” Rich told him.

“We don’t have to bite off too much,” Chris added. “We both agree ‘Shake Your Money Maker’ is a great record. We want to celebrate our most commercial part of our life and the most pure rock and roll part of our life.”

The duo whetted fans appetites for the tour on Monday morning by playing three of the record’s hit singles: “Jealous Again,” “She Talks to Angels,” and the Otis Redding cover “Hard to Handle.” It marked the first time Chris and Rich had performed together in six years.

“You boys still have it,” Howard said after the performance. “Boy, was that fun to watch.”

Next up was “She Talks to Angels,” the chart-topping rock ballad Chris said he penned about a heroin-addicted woman he’d known in Georgia. Though it’s one of their best-known tunes, the Robinsons said writing it wasn’t very time consuming. “The best songs … they just fall out of the sky and into your lap and they write themselves, really, in just a few minutes,” Chris said before they performed the song.

Finally, the newly reformed Black Crowes delivered their infamous cover the 1968 Otis Redding B-side “Hard to Handle.” “Otis Redding is still to me the greatest R&B-Soul singer that ever was,” Chris said, explaining it had originally been his idea for their band to cover the song.

“Every time I sing it I always know Otis is the greatest. I always know I’ll never do it as great, but I don’t think we attempted to re-do it,” Chris continued before embarking on the track.

When “Shake Your Money Maker” hit shelves in 1990, it won over critics and fans alike. It also netted the Black Crowes a Grammy nomination for Best New Artist. Mariah Carey wound up winning the award that year, but on Monday Chris and Rich told Howard they’re happy to have lost.

“Thank God we didn’t win that,” Chris said, referring to the commonly held belief that Best New Artist winners often struggle later on in their careers.

He further explained the real reward is knowing their music has played a vital role in many people’s lives as well as getting to see their albums on shelves alongside some of the other greats. “I always thought, ‘I’m in the same record store as Thelonious Monk? … Like, what? How did that ever happen?’” Chris told Howard.

Their debut album still holds up 30 years later, but Howard and the Robinsons were all in agreement that rock and roll had changed quite a bit over the past few decades. Rich said the early ’90s was a great time for a band to come up, but “then it sunk in the late ’90s.”

“It shifted,” he explained. “It became more about this sort of … corporate ego and hubris instead of honoring these musicians.”

Chris, however, managed to find a silver lining. “I like the way the music business is now,” he laughed. “There’s less douchebags.”

The brothers also shared some wild stories from earlier in their career which included everything from smoking a joint with director Robert Altman and getting fired by ZZ Top to watching Bob Dylan curse out the Rolling Stones. The latter happened during a gig in France where the Black Crowes got the opportunity to open for Dylan and the Stones. “I met Bob that day and he is, you know, ultimately my biggest hero,” Chris recalled.

The Stones were touring to promote an album featuring a cover of Dylan’s song “Like a Rolling Stone,” so they invited the legendary singer-songwriter to join them on stage and help them perform it in front of 70,000 people. While Mick Jagger and Dylan both happened to be wearing the same outfit, the two icons never quite managed to get on the same page.

“They come up to Bob’s turn … and Bob goes to the mic and doesn’t sing it,” Chris recounted. “They go all the way around again and he just leans into the mic and turns away. I’m like, ‘Oh my God, dude, what the fuck?’”

Though Bob finally did start singing, tensions continued to rise. As Chris remembered it, Dylan exited the stage before the tune ended and had some choice parting words for Jagger and his bandmate Keith Richards. “He walks off before the end of the song … and he turns around and he looks at them and goes ‘Fuck You!’ … and he gives him the finger,” Chris recalled with a laugh. “It’s the best thing we’ve ever seen.”

Bob and Mick’s flare-up may have been the talk of the town on that tour, but Chris and Rich admitted their own fights had often times been the main attraction over the years. Specifically, they remember touring with the British rock band Oasis and fighting in front of Noel and Liam Gallagher, who themselves have struggled to get along.

“We toured with them and we freaked them out with our fights,” Rich told Howard. “They were like, ‘Whoa, that was even intense for us.’

“We got into a really big fight at Merriweather Post. Chris was late to soundcheck and everyone was freaking out, so he and I got into it and our tour manager walked outside and Liam and Noel were outside the door and go, ‘Listen to that,’” Rich continued. “They’re like, ‘Holy shit.’

Despite everything they endured in the past, the Robinson brothers are grateful they’ve been able to learn from their mistakes. “If we had it to do over again, I wouldn’t change anything,” Chris told Howard.

“The experience teaches you,” Rich agreed. “A lot of times it’s the harder things in life that are the ones that really have the lessons.”

See the Black Crowes at New York City’s Bowery Ballroom on Monday night and click here to catch their “Shake Your Money Maker” 30th anniversary tour in the summer of 2020.

AUDIO: Bobo Says Goodbye to His Loved Ones After Getting His Infected Finger Treated