Seth Meyers made his triumphant return to the Stern Show on Tuesday, sitting down with Howard to talk about everything from his new stand-up special “Lobby Baby” to his late-night show on NBC. Before getting to the comedian, TV host, and producer’s current projects, however, Howard wanted to know more about Meyers’ years as the head writer and eventual “Weekend Update” anchor on “Saturday Night Live.”

Seth first joined the cast in 2001 after nailing an audition in front of the sketch-comedy show’s head honcho Lorne Michaels. He didn’t realize it at the time, however, as Lorne had simply shook Seth’s hand, told him “good job,” and sent him on his way. It wasn’t until he got back to L.A. that his agent told him he’d landed the gig.

“Lorne is very cryptic,” Seth told Howard. “He is not a direct person.”

After five years on the show, Lorne promoted him to become one of its head writers and soon Seth was the one doing the hiring. Remembering how confused he was after his own audition, Seth asked Lorne if he would start personally delivering the good news to new recruits. Being a new cast member is grueling and Seth wanted them to at least have some pleasant memories of Lorne singing their praises before the show started to take its toll.

“Once you get hired at ‘SNL,’ that’s the last nice thing that happens for years,” Seth said.

But changing Lorne’s approach with new hires was no easy task.

“I would bring them into the office with Lorne and he would talk for 30 minutes and tell some long story about Paul Simon and then eventually I would just get frustrated, and we’d leave, and I’d get outside the office, and I’d be like, ‘By the way, you’re hired. You start next week,’” Seth told Howard.

“I don’t think he loves being part of what would be emotional moments,” he continued.

In the half-decade since leaving “SNL,” Seth has flourished on late-night TV, hosted multiple award shows, and even released a Netflix special, but serving as head writer on the famed sketch series still holds a special place in his heart.

He still watches the show “fairly religiously” but doesn’t get too worked up whenever a bad sketch makes it to air. “I remember that every single show I ever was head writer for there was always a fucking clunker, so I have such appreciation for how hard that show is,” Seth explained.

Meyers said it’s nearly impossible to turn a bad sketch around, even if the cast knows it’s a disaster in dress rehearsal. “Sometimes the hardest thing to do is to turn a C-minus to a B-minus,” Seth said. “If it’s a C-minus at dress, it’s not gonna be an A.” 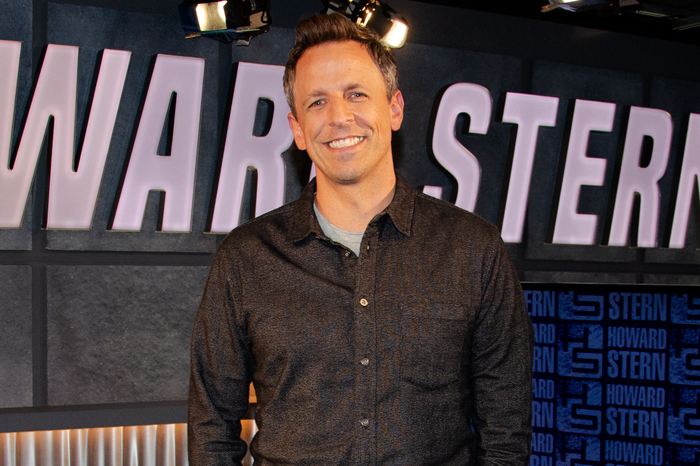 There are exceptions, however. Both Howard and Seth agreed the late Chris Farley possessed a unique ability to elevate any sketch he appeared in, thanks to the abundance of energy he brought to live shows and his unparalleled physical comedy chops. Farley’s performances were so uproariously funny they’d cause not only the audience in Studio 8H to laugh but also sometimes the guest host and other veteran cast members.

Howard wondered if Seth ever got annoyed by his colleagues breaking character in a sketch.

“I never liked it if it was because the sketch was bombing,” Seth told him, though he conceded in certain situations, when a sketch fired on all cylinders, cracking up was inevitable.

Seth left “SNL” to succeed Jimmy Fallon at “Late Night” in 2014, but he wasn’t done with the show for good. He returned to host just last year, though he admitted to Howard that some of his sketch-writing muscles had atrophied during his time off.

“I tried to write a sketch for myself, and there’s just no fastball,” he told Howard.

Though he may be a little rusty with sketches, Seth told Howard he has brought some of his old “SNL” habits to “Late Night.” Unlike most late-night hosts, the former “Weekend Update” anchor has ditched any semblance of a stand-up opening monologue—he spends most of his show sitting behind a news desk. Additionally, Seth still reads his lines off cue cards.

“Why don’t you use a teleprompter?” Howard wondered.

“You know, I came from ‘SNL,’ which is a cue card show, and I feel really confident with cue cards,” he replied. “Teleprompter is just another big machine.”

Seth went on to explain how Wally Feresten—the man who holds the cue cards for both “Late Night” and “SNL”—can actually help him in a way teleprompters can’t. “If I stumble, whereas a teleprompter keeps going, Wally sort of brilliantly brings the previous card back,” he said, adding, “He’s probably held 95 percent of the words I’ve said on TV over the years.”

Anyone who has seen “Late Night with Seth Meyers” knows the host sometimes wears his progressive political opinions on his sleeve. Howard wondered if that results in him regularly catching flak from conservative viewers when he’s out and about.

Seth said it doesn’t, in part because he lives on the mostly liberal island of Manhattan and in part because his “Late Night” has never claimed to be politically neutral. “I think if you love Donald Trump you’ve probably chosen to disengage with the show,” he said.

President Trump has personally called Seth out for his comedic barbs in the past and Howard wondered if he has ever worried about annoying the Commander-in-Chief. “I think he’s angrier at ‘SNL’ because to him it’s a betrayal,” Seth said, referring to the fact that Trump used to be a guest on the sketch-comedy show.

Regardless of one’s political leanings, Seth understands people sometimes want to be entertained without being reminded of the world around them. That’s why he and Netflix unveiled a new feature with his special “Lobby Baby” which actually allows viewers to skip right over the political section of his stand-up routine.

“What a great idea,” Howard said.

Seth revealed the idea came about after he realized the streamer already offered a feature allowing viewers to skip a TV show’s opening credits: “I thought, ‘Oh, it’ll be so easy. If they have ‘Skip Intro,’ just make it ‘Skip Politics’ and it will jump ahead.”

In reality, getting it done was tougher than it looked. “They told me they needed basically three technical engineers to work around the clock for a month to figure it out,” Seth said.

“Lobby Baby” tackles a variety of topics, from the 2011 White House Correspondents’ Dinner at which Seth roasted Trump to the comedian’s experiences with fatherhood and his growing family. The title for the special takes its name from an incredible story about the birth of Seth’s second son, which happened unexpectedly and rather quickly in the lobby of his apartment building.

“I’m really into the logistics of this thing,” Howard said, asking Seth about where he was standing, what tools the fireman used to cut the umbilical cord, and who cleaned up the postpartum mess.

Seth credited the first responders and his wife Alexi Ashe with doing all of the hard work. “You wanna know what an alpha my wife is?” Seth told Howard. “On the way to the hospital … my wife says to me, ‘Hey, write the head of the co-op board and say we’ll pay for a new carpet.’ But not because she felt bad, because she wanted to pick a new carpet.”

Seth’s special also dabbles in religion. At one point, the comedian explains many people look at his face and name and assume he’s Jewish even though he is not. Howard admitted he thought Seth was Jewish, too. “You look like guys I hung out with at summer camp,” he laughed.

Seth said his wife is Jewish and they plan for both of their sons to have bar mitzvahs when the time comes. He told Howard he thinks it will give them more than just religion, it will also help them appreciate their family and their culture’s rich traditions.

In Seth’s mind, the real question is whether or not he himself will convert to Judaism. “I got a lot of things working against me,” he said. “My father-in-law, he converted, and my brother-in-law is talking about converting as well. It’ll be tough to be a holdout.”