“It’s always good to catch up with her at this time of the year,” Stern Show co-host Robin Quivers says of fan favorite Suzanne Muldowney 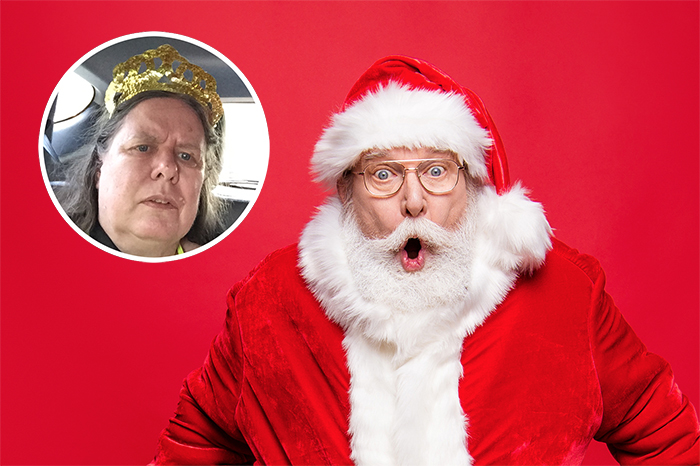 The holiday season is now here and the one and only Underdog is once again cautioning parents to protect their children from something she considers to be a scourge on society: Santa Claus.

In years past, Stern Show listeners have heard Suzanne’s arguments for why Father Christmas should be done away with once and for all, but her latest rant was more impassioned than ever.

“It’s always good to catch up with her at this time of the year,” Robin Quivers said with a smile.

Howard played Underdog being interviewed on the public access TV show “Checkerboard Kids” where she charged Old St. Nick with having three main faults: over importance, false godhood, and inconsistencies.

“The average citizen cannot go about his or her daily business without encountering some Santa representation!” she yelled while talking to the show’s host, Checker Phil. “Even commercials shown after Christmas Day for weight-loss programs engage Santa in them!”

She also pointed to the song “Santa Claus Is Coming to Town” as proof of the mixed messages surrounding Kris Kringle since children are told they “better watch out” for a boogeyman-like figure who also will bring them presents.

Suzanne herself was made to believe in Santa when she was younger and she’s never forgiven her parents for telling her something that wasn’t true. “The eighth commandment expressly forbids lying,” she explained during her television appearance. “I was very angry when I found out I had been deceived. I had been under the impression that children alone made mistakes, did wrong, or committed sin – grown-ups were perfect. But now, my parents had been dishonest with me!”

Stern Show staffer Shuli Egar told Howard she asks him every year if he’s told his children the truth about Santa.

As uncommon as Suzanne’s clash with Santa Claus is, both Howard and Robin agreed she does have a point. “She makes a good argument,” Howard said. “Why do we tell kids we have to be truthful and honest and then we lie to them about Santa?”

Underdog offered a final warning to anyone willing to listen, saying those who continue to push the Santa Claus lie will all have to eventually answer to God “with penalties to be paid in either this life or the hereafter!”