Entertainer returns to the Stern Show ahead of his critically anticipated film “Uncut Gems,” opening Dec. 13 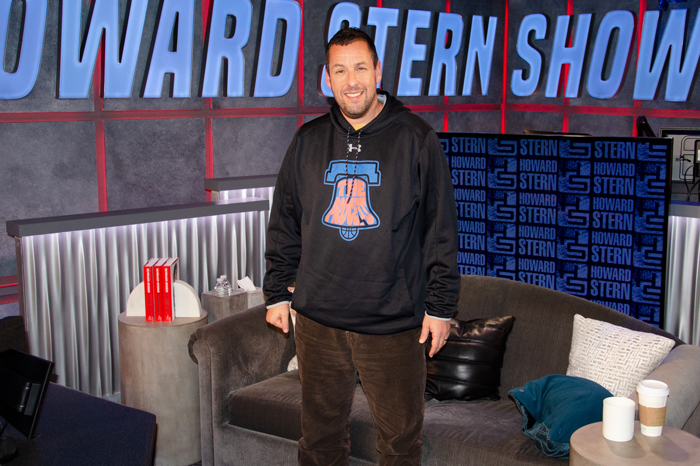 Few Hollywood titans possess a skillset as diverse as comedian, actor, musician, writer, and producer Adam Sandler. While the legendary entertainer touched upon each of those topics during his return to the Stern Show studio on Tuesday, Howard couldn’t help but focus on his acting, especially considering how critics are raving about his performance in “Uncut Gems,” coming to theaters next week.

Adam stars as a gambling-addicted jeweler in the Safdie brothers-directed awards contender which also features LaKeith Stanfield (“Sorry to Bother You”), Eric Bogosian (“Talk Radio”), Grammy winner the Weeknd, Tony winner Idina Menzel, and NBA champion Kevin Garnett. Despite sharing the screen with so many other big names, the film’s press has largely revolved around Adam’s acting.

Howard wondered if the longtime comedian hoped he might win the Oscar for Best Actor.

There’s more to winning an Academy Award than just great acting, of course. There’s also usually a studio-driven marketing campaign. Adam conceded the “Uncut Gems” promotional tour is more grueling than normal. “I’m doing stuff now I’ve never done before,” he said, explaining he’s involved in Q&A screenings and has been sitting down with journalists for the types of interviews he typically shies away from.

“I love the movie. Now I gotta fucking talk about it!” he laughed.

He told Howard that Joshua and Benny Safdie, the New York City-based filmmakers behind “Uncut Gems,” are big fans of the Stern Show. Perhaps unsurprisingly, there are some parallels between Howard’s show and the world the film inhabits. “A lot of the characters in the movie feel like people you would bring on the show,” Adam said.

Last time Adam sat down with Howard, it was to promote his Netflix musical-comedy special “100% Fresh.” He talked music again this time, telling Howard all about his jam sessions with rock stars ranging from Eddie Vedder, Lindsey Buckingham, and recent Stern Show guest Joe Walsh to John Fogerty, whom he shared the stage with at the renowned Los Angeles hotspot Largo. He even recalled straining his voice while singing the Aerosmith song “Mama Kin” alongside Slash of Guns N’ Roses fame.

“I was so excited I was jamming with Slash … that at soundcheck I ripped it as hard as I could rip it. It fucked my voice up for like two years,” Adam told Howard.

Adam has a great relationship with Maroon 5 frontman Adam Levine, too, and when the singer visited the Stern Show in October he mentioned performing at Sandler’s daughter’s bat mitzvah. On Tuesday, Howard was dying to know how Sandler managed to talk him into it.

Sandler said the two first met at a New York Knicks game and eventually bonded over everything from their love of basketball to Sandler’s mom’s maiden name also being Levine. He eventually worked up the courage to text the rocker and ask him a favor for his daughter’s big day.

“I felt like a psychotic asshole,” Sandler admitted. But it worked. “He was so nice, saying, ‘I can’t say no to you Adam,’” he said.

Levine wound up performing three songs at the bat mitzvah, wooing 13-year-olds and their parents and grandparents alike.

“Now you owe him,” Howard pointed out.

“Whatever he wants. He’s such a fucking great guy,” Adam agreed.

He also opened up about his friendship with Conan O’Brien, who was a veteran staff writer when Sandler joined “Saturday Night Live” in 1990. “He was great to me when I was on ‘SNL,’” Adam said. “His writing was incredible.”

Now, the two are neighbors and send their kids to the same school—and Adam rarely lets him live it down. He told Howard he constantly pranks Conan. He volunteers him at P.T.A. meetings, rings his doorbell unexpectedly, and yells out his name every time he drives or bikes by his house.

“I scream ‘Coooooonan,’” Adam explained. “No one’s replied yet.

Conan isn’t the only friend Adam still has from his “SNL” days. He also still keeps in contact with David Spade and Chris Rock, who he and the late Chris Farley shared an office with when they were working on the sketch-comedy show.

In May, Adam returned to Studio 8H to host the sketch-comedy show for the very first time since getting fired nearly 25 years ago. Considering how his run had ended, Howard wondered if Adam had felt any ill will toward the show or its creator Lorne Michaels.

“I gotta be honest, I didn’t … I realize what ‘Saturday Night Live’ did for me,” Adam told Howard.

Adam did concede that getting fired had caught him by surprise at the time. “I was hurt because I didn’t know what else I was going to do,” he said, explaining he and Farley had commiserated together.

Though his “SNL” comeback was well received, Adam admitted returning to sketch comedy after such a long hiatus was no easy feat. “I was nervous,” he told Howard, explaining he spent most of the week leading up to the show worrying about how it would go. “I just noticed how loose everybody else was in the cast—they were laughing and having a good time and I was fucking terrified about how I was gonna play these roles.”

After a memorable career on “SNL,” Adam went on to star in, write, and produce countless big screen films. He’s reportedly grossed over $3 billion at the box office and his Netflix films are some of the streamer’s most popular. In “Murder Mystery,” which hit Netflix earlier this year, Adam reunited with his “Just Go With It” co-star Jennifer Aniston. The two play a married couple and, unsurprisingly, the script called for them to get romantic with one another. On-set love scenes can be awkward, but Adam did his best to tread lightly.

“I’m always trying to be respectful,” he told Howard.

Adam’s real-life wife Jackie Sandler, meanwhile, advocated for a steamier approach. She joined Adam on the set and encouraged her husband to bring even more passion to a makeout scene with Jennifer. That wasn’t the only time she has pushed for her husband’s scenes to get hotter and heavier, either.

“She said the same thing for ‘Uncut Gems,’” Adam revealed.

As it turned out, making out was just the tip of the iceberg for Adam in “Uncut Gems.” He confirmed his new film also features a scene where he’s naked—and in the trunk of a car. “The most humiliating part about being nude in the trunk of a car in front of a camera crew is getting out after,” he explained.

Howard commended him for his dedication to his craft, admitting he’d probably pass on any film script calling for him to get naked on camera.

“It certainly made taking the movie a little more difficult,” Adam said with a laugh.

AUDIO: Sour Shoes Calls in as Jackie ‘the Joke Man’ Martling and Sings a Pink Floyd Song as Mariann From Brooklyn